Picking a Fight: The Rise of Armed Separatists in Cameroon 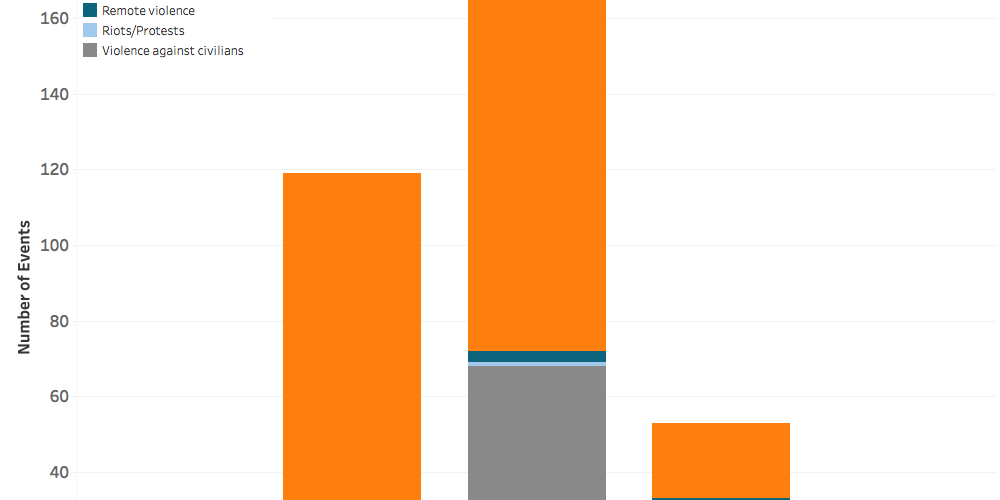 With elections looming in October, we consider the trajectory of the current conflict in Anglophone Cameroon and demonstrate how the government’s heavy-handed response to protesters facilitated the rise of armed secessionist movements against the Cameroonian government.
What began as a peaceful protest by English-speaking lawyers and teachers in Cameroon in 2016 has escalated into a brutal conflict between armed separatists and the Cameroonian government. The strike was organized by Anglophone civil society organizations who “believe[d] that only a complete overhaul of the administrative departments in the country and an inclusive federal constitution can end their woes” (Al Jazeera, 5 December 2016). There are a number of legitimate grievances amongst English-speaking Cameroonians: their unemployment levels are higher; French-speaking government bureaucrats occupy positions in Anglophone communities; and official governments documents and policies were never printed in English (despite it being one of the country’s official languages).
Government Repression
The government’s response to the protesters involved coercive tactics, including the arrests of prominent Anglophone leaders, who were detained under the country’s anti-Terrorism Law adopted to cope with the threat from Boko Haram (Frontline Defenders, 27 November 2017). The Cameroonian government and police have relied upon violence against civilians in a number of their activities in the Northwest and Southwest regions (see graph below). The violence against civilians that the state has engaged in since 2016 has also become a source of frustration amongst Anglophone Cameroonians. 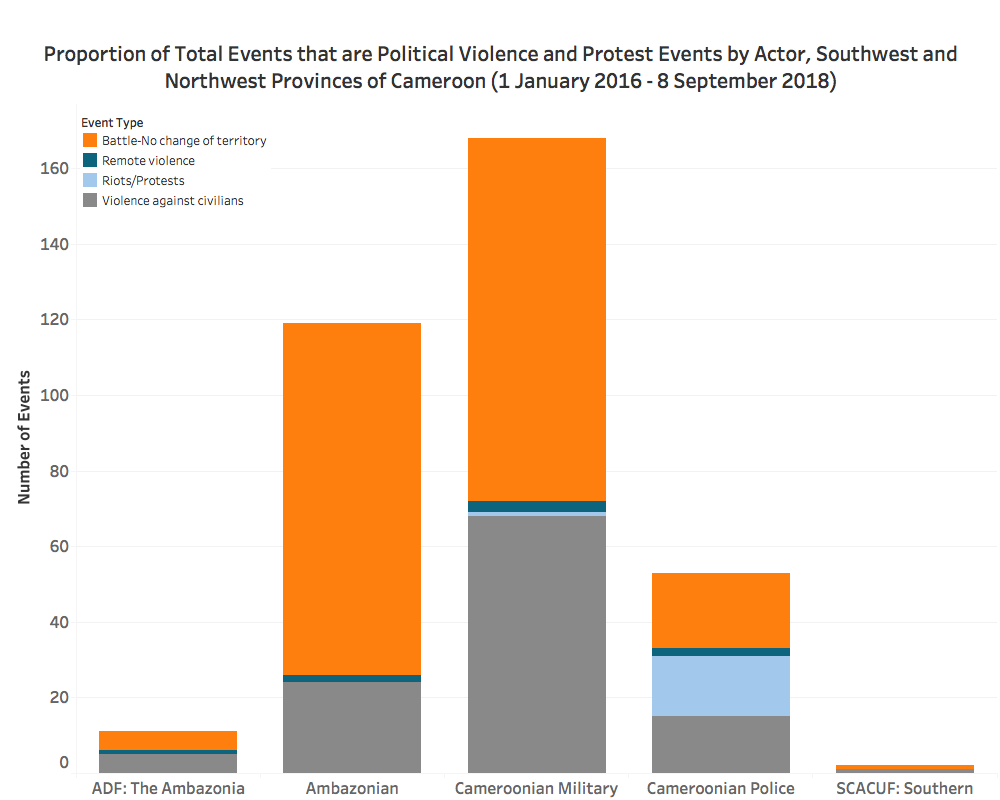 Violence in the region escalated in September 2017 (see graph below), coinciding with the Biya government’s banning of the two civil society groups involved in coordinating the peaceful protests, the Southern Cameroon National Council (SCNC) and the Cameroon Anglophone Civil Society Consortium (CACSC) (Amnesty International, 20 January 2017). Also in 2017, Anglophone activists associated with CASC organized “Operation Ghost Town” which called for Anglophones to keep their children out of school, and included a boycott of businesses on certain days; these boycotts have become flashpoints for conflict since implemented (The Guardian, 30 May 2018). 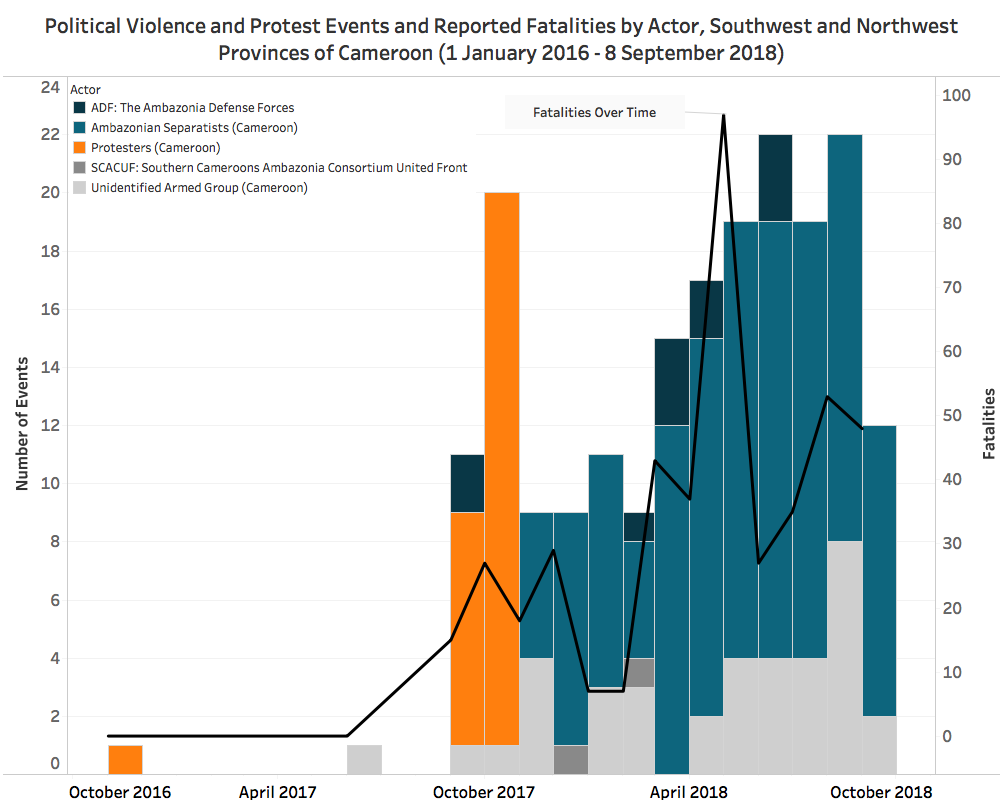 As a result of the Cameroonian government’s actions, those interested in promoting the interests of Anglophone Cameroonians peacefully were deprived of options — and the groups that had previously been able to operate peacefully and openly were placed on equal footing with those who advocated for armed resistance and independence.
The Shift to Violence
Since September 2017, the number of violent events in Anglophone Cameroon have increased rapidly; over that time period there have been 369 reported fatalities across 133 different events involving the Ambazonian Defense Forces, groups identified only as Ambazonian secessionists, and the Southern Cameroons Ambazonia Consortium United Front. 2018 in particular has seen a shift in both the geographic locations of violence, but also the characteristics of the groups’ activities.
In 2018, the ADF, Ambazonian Separatists, and SCACUF have expanded their activities geographically; in 2017 these groups were active in 5 provinces within Northwest and Southwest Cameroon, whereas in 2018 thus far, they have been active in 12 provinces (see below). At the same time that these groups have been expanded the geographic scope of their operations, they have also been engaging in more lethal violence (see below). 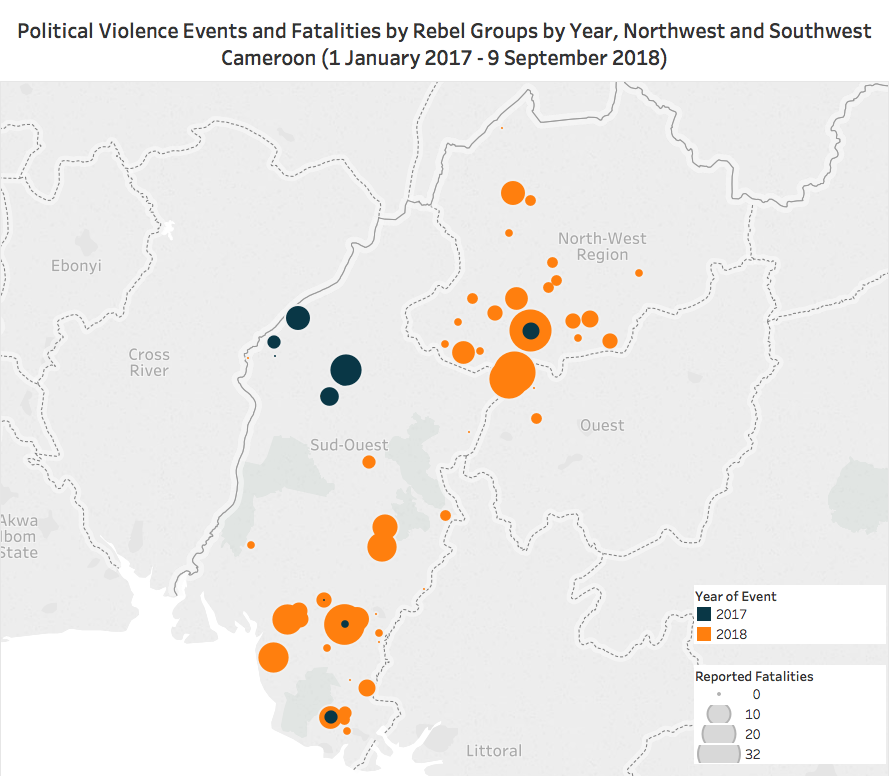 The bulk of the fatalities associated with these Anglophone rebel groups come from their conflict with the government. Since the start of 2018, 307 of the 321 reported fatalities for events involving such groups came from clashes with the government.
The Ambazonian Defense Forces (ADF) are the most active named individual separatist group in Anglophone Cameroon. Since 2017, the group’s activities have also shifted locations. Whereas in 2017 the group was active in Manyu and Mezam, in 2018 the group has conducted operations in Boyo, Fako, Lebialem, Momo, Ndian, and Koupe-Manengouba. According to Cho Ayaba, a leader of the ADF, the armed group is comprised of “1,500 active soldiers spread over more than 20 camps throughout anglophone Cameroon” (IRIN, 12 June 2018).  Though the ADF is the armed wing of the Ambazonia Governing Council, since 2018 their tactics do not spare their potential constituents. Whereas in 2017, there were no reported incidents of violence against civilians by the ADF and in 2018 thus far there have been 5 such incidents. Though the ADF is engaging in activities directed at civilians, these attacks are not particularly lethal and have only produced one reported fatality thus far. Of the 16 reported fatalities associated with ADF activities since 2017, 12 have come in confrontations with the government.
The bulk of the rebel activity in Northwest and Southwest Cameroon is attributed only to “Ambazonian Separatists,” which is a category comprised of a myriad of militias. Like the ADF, Ambazonian Separatists only began engaging in violence against civilians in 2018; since the start of the year there have been 25 incidences that have resulted in 13 fatalities. Far more frequent and lethal have been the groups’ confrontations with the government. In 2017, Ambazonian Separatists clashed with the government 13 times, resulting in 39 reported casualties; in 2018 thus far, these groups have confronted the government 83 times, resulting in a reported 295 fatalities. Concurrently, Ambazonian Separatists have expanded into 7 new areas in Northwest and Southwest Cameroon since the start of 2018; many of the regions where Ambazonian Separatists are newly active are in Northwest Cameroon. This expansion does not necessarily suggest that any one militia that comprises the Ambazonian Separatists is expanding its operations; the spread could be the result of new groups forming in the Northwest.
While the bulk of the fatalities from Anglophone militias come from battles with the government, adoption of violence against civilians by the ADF and other Ambazaonian Separatists has created conditions under which citizens in the region are subjected to violence both from the state and from rebel groups in the region. Many have fled Cameroon as a result of the conflict; in May 2018, the United Nations High Council on Refugees estimated that 21,000 were seeking refuge in Nigeria and that an additional 160,000 were internally displaced in Cameroon (International Crisis Group, 27 July 2018).
Looking Ahead: What’s Next for Anglophone Cameroon?
The fractured nature of the Ambazonian secessionist movement makes it gauge how many fighters there are in total. Speaking to Reuters, a representative from one secessionist group Manyu Tigers asserted that the group had “hundreds” of members and that they were financed with “money from all over the world” and obtained weapons on the black market (Reuters, 8 February 2018). Even if it were possible to verify these claims, it would still be unclear if the Manyu Tigers’ financing and membership structure resembles other groups in the region. Identifying the objectives of these armed groups is difficult, given the multitude of armed groups and the difficulty of determining if self-identifying spokespeople are really speaking for any group or demographic.
The intensity and frequency of such political violence is only likely to increase as the October 2018 elections approach. There are reports that the “Amba Boys,” (as many Anglophone separatist militants are called) are demanding a boycott of the elections and threatening those that try to register to vote. In early September, Anglophone separatists affiliated with the ADF reportedly used burned out buses to blockade Bamenda, the capital of the Northwest Region (the Boston Globe, 9 September 2018). Lucas Cho Ayaba, an exiled leader in the Ambazonia Governing Council, told the Guardian in May 2018, “Our first aim is to make Ambazonia ungovernable. We must try to raise the cost of the occupation to higher than the profits they get here” (The Guardian, 20 May 2018). Making Anglophone Cameroon ungovernable apparently includes tactics that directly target civilians.
The elections are also likely to be a significant time for many in the region, as it will mark the two year anniversary of the declaration of Ambazonian independence.  Joshua Osih, a member of the Social Democratic Front (a major opposition party in Cameroon) says that “elections are not possible in the present circumstances in the Northwest and the Southwest,” however alternative arrangements have not yet been made (Voice of America, 10 July 2018).