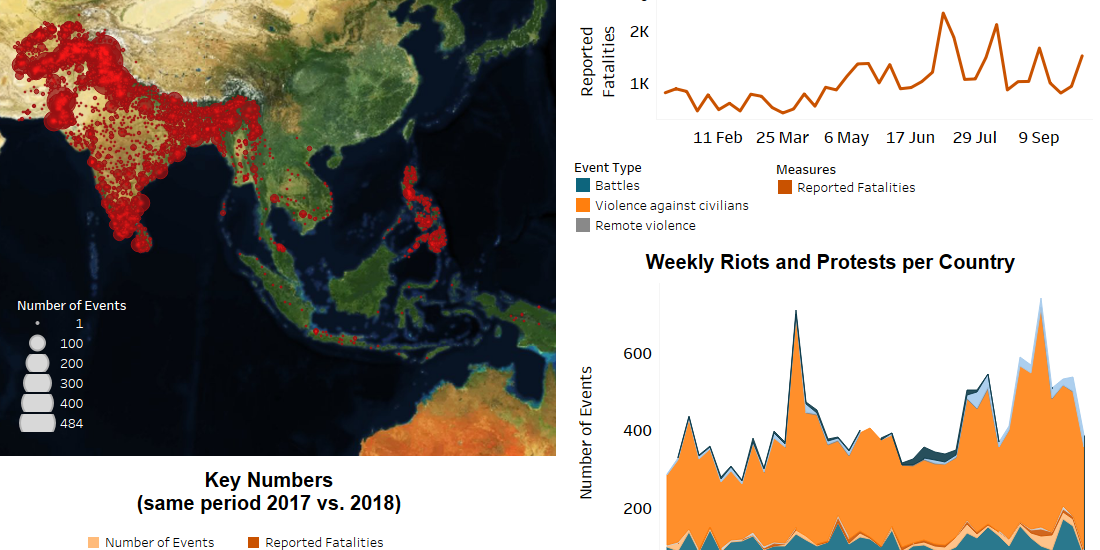 The overall levels of political violence remained relatively static in the South and Southeast Asian regions over the last few weeks, whereas the number of reported fatalities increased significantly last week. The overall levels of demonstrations decreased across the region, especially in Pakistan and India.
In Afghanistan, militant groups continued to target election candidates, staff, and supporters in the lead up to the 20 October parliamentary elections. Two major explosive attacks targeting parliamentary candidates–one of them a woman–left 31 people reportedly killed in Lashkargah city, and Rustaq district of Takhar province. Elsewhere, the Electoral Complaints Commission office in Kabul was targeted with a grenade, while two campaign offices in Faryab and Paktia provinces were attacked by IEDs and small arms. Oddly, neither Taliban nor Islamic State (IS) have claimed any of these attacks.
Furthermore, non-election violence has also increased throughout the country. The Taliban has been particularly active, launching major assaults on the district centres of Saydabad and Khoshamand, in Wardak and Paktika province, respectively. While Taliban sources claim the district centres were captured, neither government nor independent sources corroborated this. In the provinces of Ghazni and Nangarhar, both Taliban and IS fighters suffered significant casualties from Afghan air and ground operations.
In Pakistan, Hizbul Ahrar–a militant group with connections to Tehreek-i-Taliban Pakistan (TTP)–claimed responsibility for what could potentially be the group’s third targeted killing of a policeman over the past two weeks. On 8 October, gunmen shot dead a Shiite, off-duty policeman in New Karachi town.
Last week, activists took to the streets across Pakistan to give voice to their opposition of the newly elected Pakistan Tehreek-i-Insaf (PTI) government. Lawmakers, local leaders, and workers of Pakistan Muslim League-Nawaz (PML-N) staged protests across Khyber Pakhtunkhwa, Punjab, and Islamabad following the arrest of the party’s president, Shahbaz Sharif, in Lahore on 5 October in connection to a fraudulent housing scheme. Activists and rickshaw drivers in Sindh demonstrated against rising prices, while the Awami National Party (ANP) staged protests in major cities across Khyber Pakhtunkhwa province on 12 October against PTI’s economic policies and the inflation they are experiencing.
In India’s state of Jammu & Kashmir, three militants were killed during encounters with government forces, including the prominent Hizb-ul-Mujahideen (HM) commander Manan Bashir Wani. Wani’s death prompted a wave of violent clashes between rioters and government forces amid a Joint Resistance Leadership (JRL)-led shutdown across the valley. A significant number of clashes between rioters and government forces were also observed during JRL shutdowns called during polling for the panchayat (village council) and municipal elections. Two incidents of cross-border violence between Pakistani and Indian state forces were observed last week, reportedly leaving one Pakistani civilian and an Indian soldier injured.
Meanwhile, several cases of vigilante violence were reported from India. In the state of Gujarat, local mobs attacked migrant workers following the arrest of a man from Bihar in connection with the rape of a minor girl (NDTV, 6 October 2018). In West Bengal and Bihar states, two cases of violence against civilians based on allegations of witchcraft were recorded last week.
In Bangladesh, the number of demonstrations increased last week compared to previous weeks. Children of freedom fighters, indigenous students, and political groups took to the streets across the country, demanding restoration of quotas reserved in government jobs. Furthermore, the Bangladesh Nationalist Party (BNP) and its associate bodies carried out a number of demonstrations claiming that a court verdict convicting a number of party leaders for grenade attack cases that happened on 21 August was politically motivated (The Daily Star, 11 October 2018).
In Nepal, the arrest of CK Raut, the leader of the Free Madhesh Alliance and Coordinator of the Alliance for Independent Madhesh (AIM), led to demonstrations by his supporters demanding his release (The Himalayan Times, 8 October 2018).
In Sri Lanka, members of the Tamil community continued to stage demonstrations, demanding the release of the Tamil political prisoners who are on hunger strike at the Anuradhapura and Welikada prisons. Most notably, students carried out a five-day protest march from Jaffna to Anuradhapura to demonstrate their solidarity with the prisoners (Tamil Guardian, 13 October 2018). In addition, multi-day protests occurred in the country over the proposed garbage disposal in Aruwakkal (Hiru News, 12 October 2018).
As politicians began filing certificates of candidacy for the over 18,000 positions open in the 2019 midterm elections in the Philippines, many potential candidates last week experienced targeted violence (Rappler, 10 October 2018). Two town councilors, as well as one former town councilor, were reportedly killed by unidentified assailants. In Samar province, a former mayor, who planned to run in the 2019 elections, was wounded and his bodyguard was reportedly killed by the New People’s Army (NPA).
Fighting between the Myanmar military and the Kachin Independence Army (KIA) and the Myanmar military and the Ta’ang National Liberation Army (TNLA) continued last week in Myanmar. The fighting occurred as the signatories to the Nationwide Ceasefire Agreement (NCA) prepared for talks this week in Nay Pyi Taw with the military and the government (Mizzima, 15 October 2018). Both the KIA and TNLA have not signed the NCA and are not participants in this week’s talks.
Several demonstrations occurred in Myanmar last week. Notably, in Shan state, nearly 1,000 people protested the Upper Yeywa Dam being built on the Namtu River in Hsipaw township. Villagers from Aung Tha Pyay village in the Mandalay region took their long-standing protest against a coal-fired cement factory in their village to Yangon. The villagers have been protesting the factory’s environmental impact as well as the factory’s use of the villagers’ lands to build a road leading to the factory without proper compensation. Workers from Fu Yuen Garment Co Ltd continued their nearly two-month long protest calling for better labor conditions. On 15 October, the protesters were attacked in front of the factory by a group with iron bars, sending many of the protesters to the hospital (Reuters, 16 October 2018; event will be included in next week’s data). 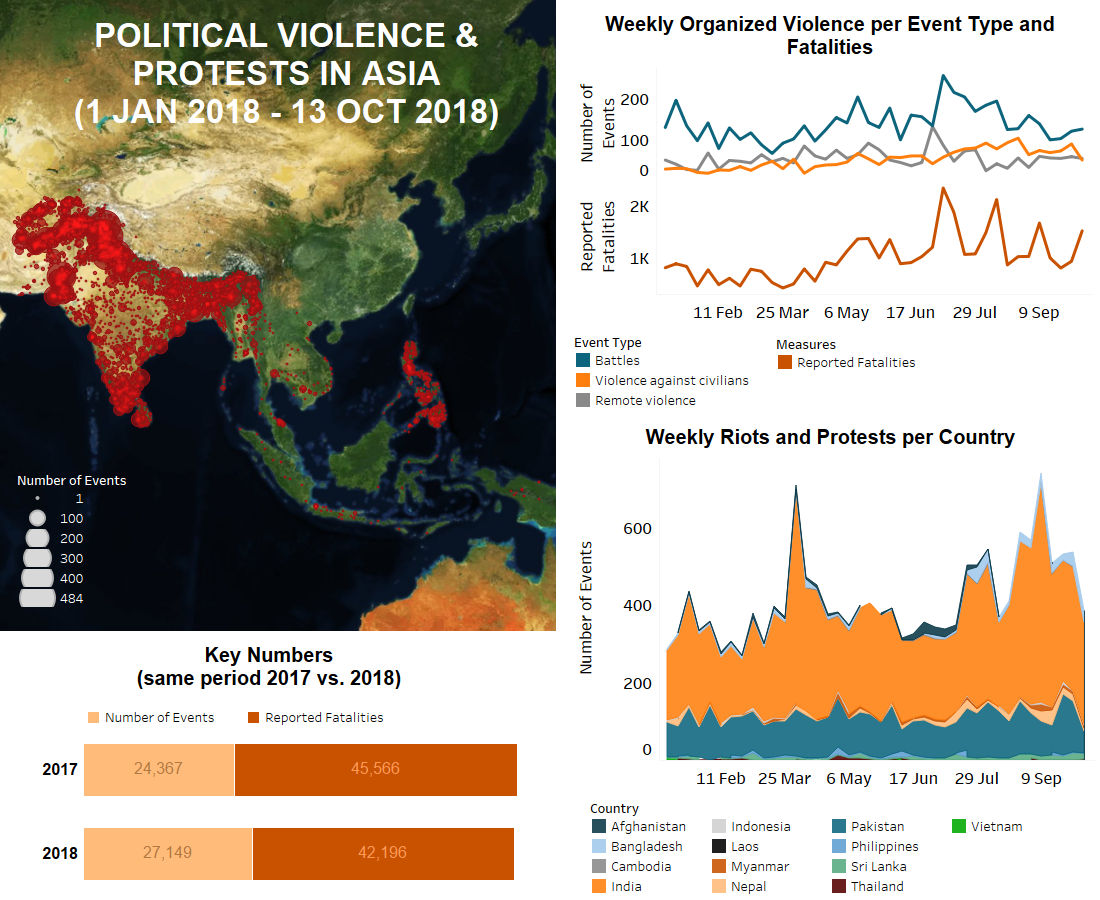