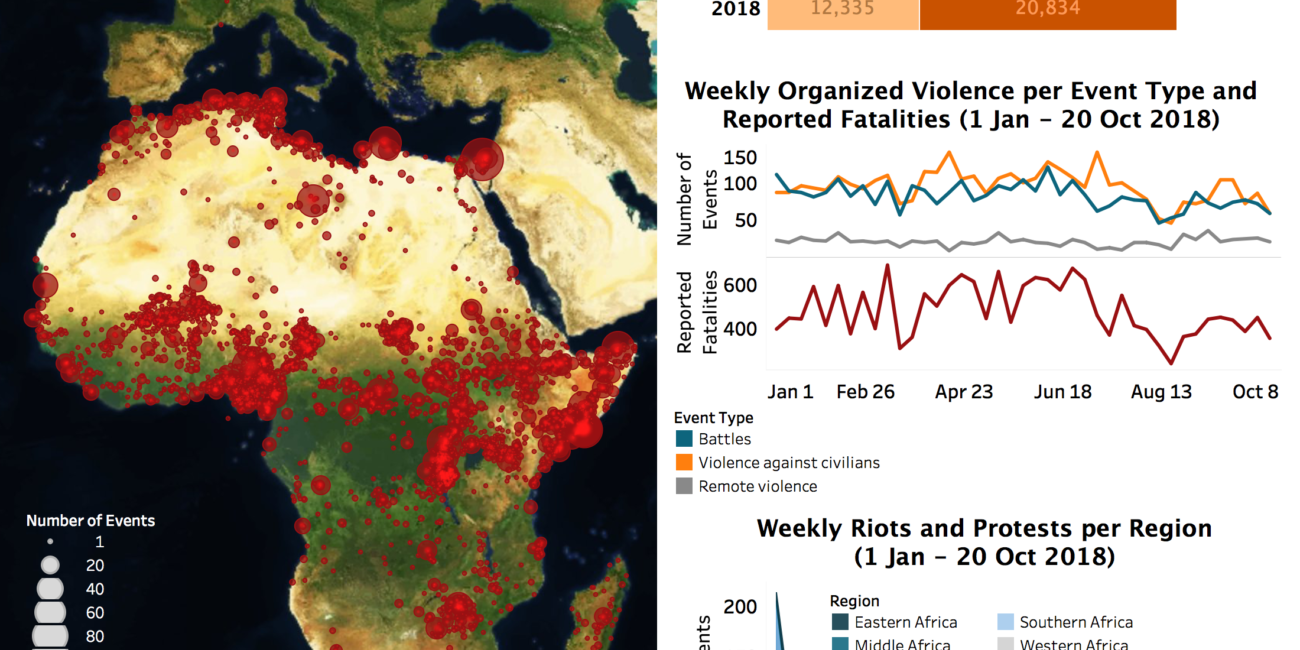 Developments last week included several highly lethal attacks in both Nigeria and Somalia. Both countries remain the most active countries in Africa in the ACLED dataset, representing nearly one third of the total number of organised violence events and half of the number of fatalities recorded so far in 2018.
In Nigeria, last week’s developments underlined how the shaky coexistence between various identity groups add additional layers of instability in the country. A market dispute between Hausa (Muslim) and Adara (Christian) groups in Kasuwan Magani in Kaduna state on October 18th quickly escalated and caused a reported 55 deaths. In Benue and Taraba states, the reinforcement of security operations against herder militias and other militants also led to at least two ambushes on the state forces by militiamen loyal to Terwase Agwaza on October 14th and 18th. Another 15 people were killed. Meanwhile, new threats are emerging within the regular fronts. The execution of a midwife working for the ICRC by the Boko Haram faction led by the Islamic State, the second in barely a month, underlined the new threats posed by factionalism within the group to aid workers in Nigeria.
In Somalia, the military forces and international partners have escalated their air operations against Al Shabaab militants in recent weeks. On October 13th, a US airstrike targeting the militants in Harardere town in Mudug killed at least 60 militants. This was the deadliest US airstrike since November 2017, and the second deadliest of 2018 – the Ethiopian forces had reportedly killed 70 Al-Shabaab fighters a month prior in Lowi-Erjeeg village in Bakool region. The US and Kenyan militaries carried out further airstrikes last week in Lower Juba and Gedo regions. But Al Shabaab maintains a firm grip on violence, recording in 2018 amongst the highest levels of violence since its emergence in Somalia. On October 13th, the militants also carried their deadliest suicide attack since October 2017. A suicide attacker detonated in a busy cafe in Baidoa town (Bay region), leaving at least 24 people killed (including the bomber).
Key developments also occurred in other very active countries in Eastern Africa.In Ethiopia, there is a widening disconnect between the ambitious reform agenda promoted by PM Abiy at the federal level and the developments at the regional level. Last week, the special police of the Tigray region killed at least four people who were protesting being administered in the Tigray Region for instance, while protests held in Asaita to demand changes in the governance of the Afar administration were also repressed. In the Benshangul‐Gumaz region, at least 51 people were detained after they were found to be training and preparing to attack people in the region. Meanwhile, clashes between the state forces and the Oromo Liberation Front (OLF) resumed in the Oromia and Southern regions as fissures appeared over disarmament issues in the recently-signed peace agreement.
In South Sudan, the peace agreement signed in September is weakened by the continuation of fighting between the military and the main opposition groups (the Sudanese Peoples Liberation Army/Movement-In Opposition (SPLA-IO) and the South Sudan Opposition Alliance (SSOA)). Several offensives have been carried out in the first week of October around Wau (Western Bahr el Ghazal). Intra-opposition tensions are also on the rise: a dispute between commanders of the SPLA-IO and of the National Salvation Front (NSF) led to clashes last week in Yei (Central Equatoria), while a pattern of deputy commanders of smaller rebel groups announcing coups (which do not appear to have actually taken place) has also been a recurring one over the past month and half, most recently within the South Sudan Liberation Movement/Army (SSLM/A).
A last key development last week was the violence that hit Ivory Coast after the country held nationwide municipal and regional elections. The results announced on October 15th gave the lead to the ruling party in both elections. Supporters of the ruling Rally of Houphouetistes for Democracy and Peace (RHDP) and rival candidates clashed before and after the results were announced in Lakota (Goh-Djiboua), Issia (Sassandra-Marahoue) and Tanda (Zanzan). One person was stabbed to death in the violence in Lakota on October 13th. The buildings of the Independent Electoral Commission (CEI) in Sangouine (Montagnes) were ransacked on October 13th and the electoral property destroyed in Bonoua (Sud Comoe) to disrupt the holding of the vote, while rioters clashed with the police in Bassam (Sud Comoe) and in Agboville (Lagunes) on October 15th. The violence occurred in a tense political climate, which will likely persist until the next presidential elections in 2020. 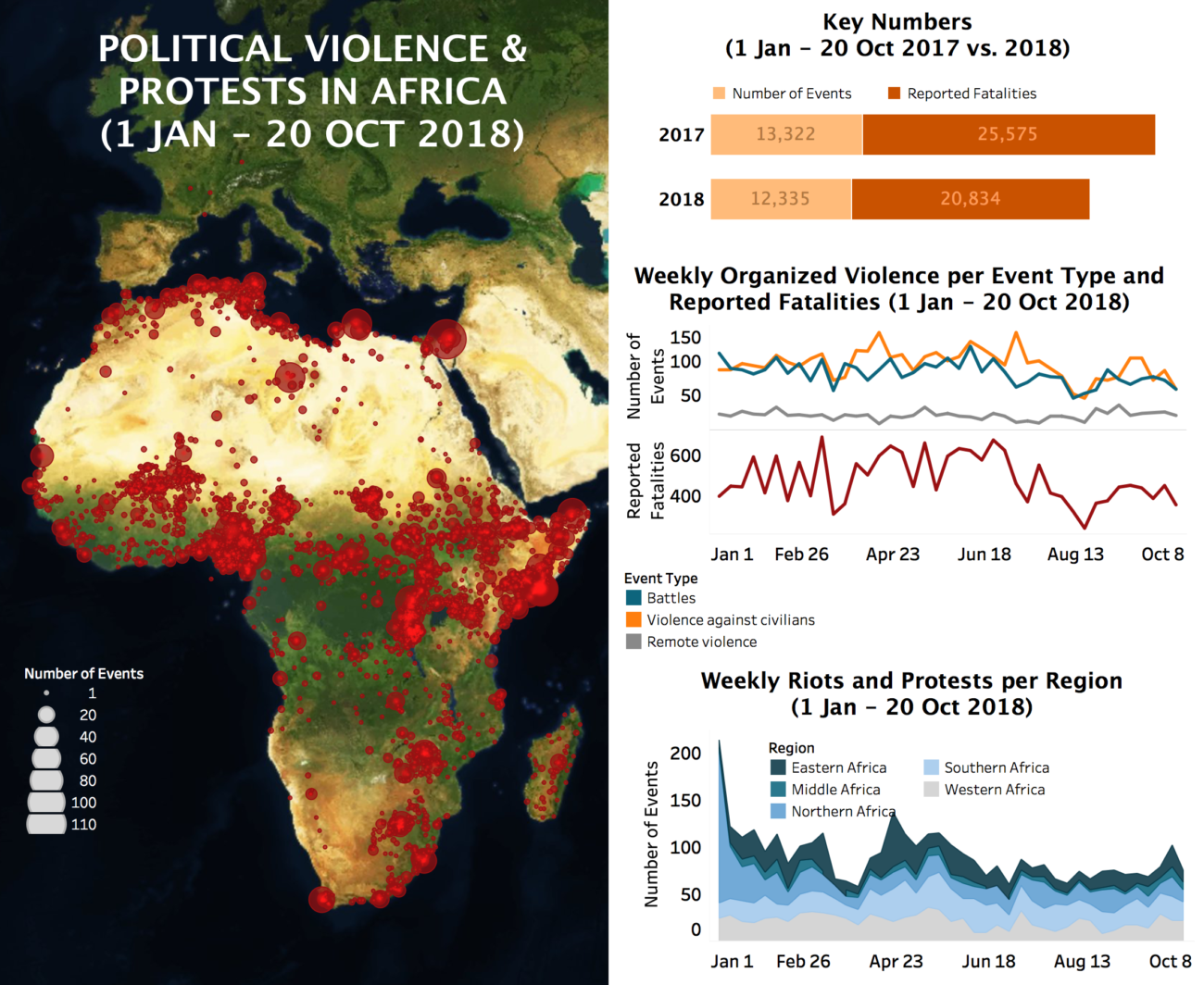