Impunity, the Imbonerakure, and Instability in Burundi 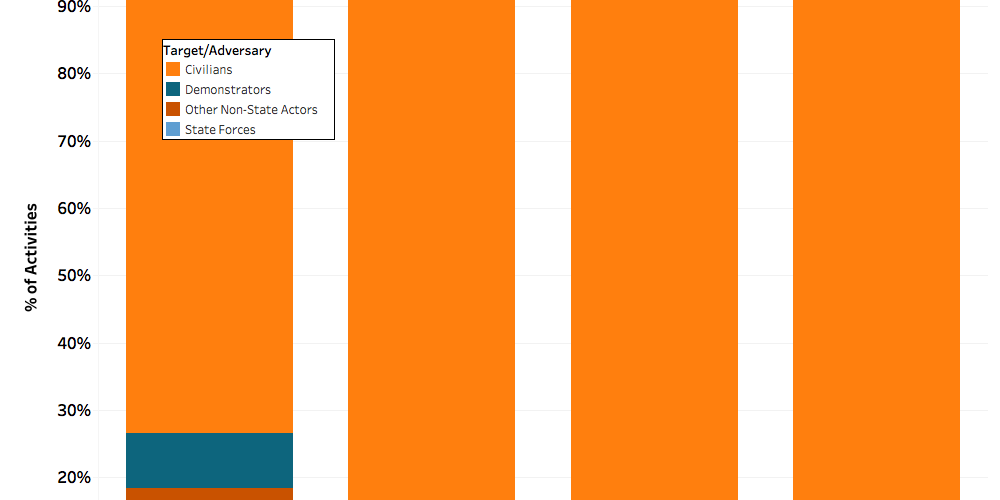 The Imbonerakure, the youth wing of the ruling National Council for the Defense of Democracy–Forces for the Defense of Democracy (CNDD-FDD), has been a potent source of insecurity in Burundi since 2015. The group rose to prominence that year as a result of  President Nkurunziza’s controversial (and potentially unconstitutional) bid for a third term, which resulted in a violent political crisis (ACLED, May 2016). Though Nkurunziza will not face election until 2020 (if he chooses to stand for election again) and does not face an immediate political crisis, violent activities involving the Imbonerakure have been on the rise since 2015.
Already, 2018 has been the group’s most deadly year, with a reported 37 fatalities associated with its violent activities. This increase in the scale of violence has been characterized by a greater proportion of violence being directed at civilians. Whereas in 2015, roughly 75% of the Imbonerakure’s violent activities involved violence against civilians, in 2018 that proportion has risen to nearly 94%. The growth in the scale and changes in the characteristics of the Imbonerakure’s violence are a consequence of widespread impunity in Burundi, the collaboration between the Imbonerakure and the Burundian government, and the heightened political tensions surrounding the May 2018 constitutional referendum. The resultant situation has endangered civilians, encouraging many to flee the country to avoid political persecution.
Who are the Imbonerakure?
The Imbonerakure, which translates to “those who see from afar,” are the youth wing of the CNDD-FDD. The group was formed in 2010 by former fighters “from the ruling party’s previous incarnation as a rebel group who never fully demobilised” (IRIN, 28 April 2015). According to some reports, the group boasts a membership of 50,000 people (IRIN, 28 April 2015); though other reports have noted that the group relies on forced recruitment of members, implying that not all members are ideologically motivated (United Nations Human Rights Council, 10 September 2018). The Imbonerakure have, since 2015, been associated with more than 940 violent events, which have resulted in more than 110 reported fatalities. The majority (just over 90%) of the Imbonerakure’s activities since 2015 have consisted of violence against civilians.
Changes in Violence Recently
Violence associated with the Imbonerakure has been on the rise in 2018, as illustrated in the graph above. As noted earlier, since the latest political crisis in 2015, the preponderance of the Imbonerakure’s violence has been violence against civilians and that proportion has been steadily rising (see graph below). 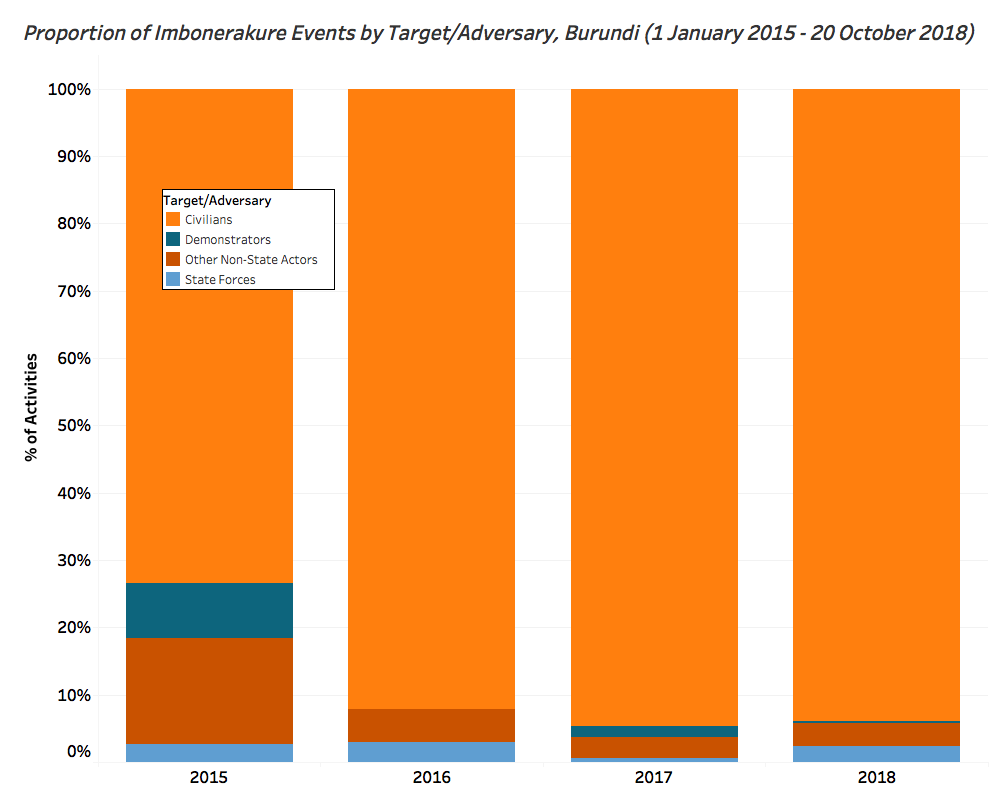 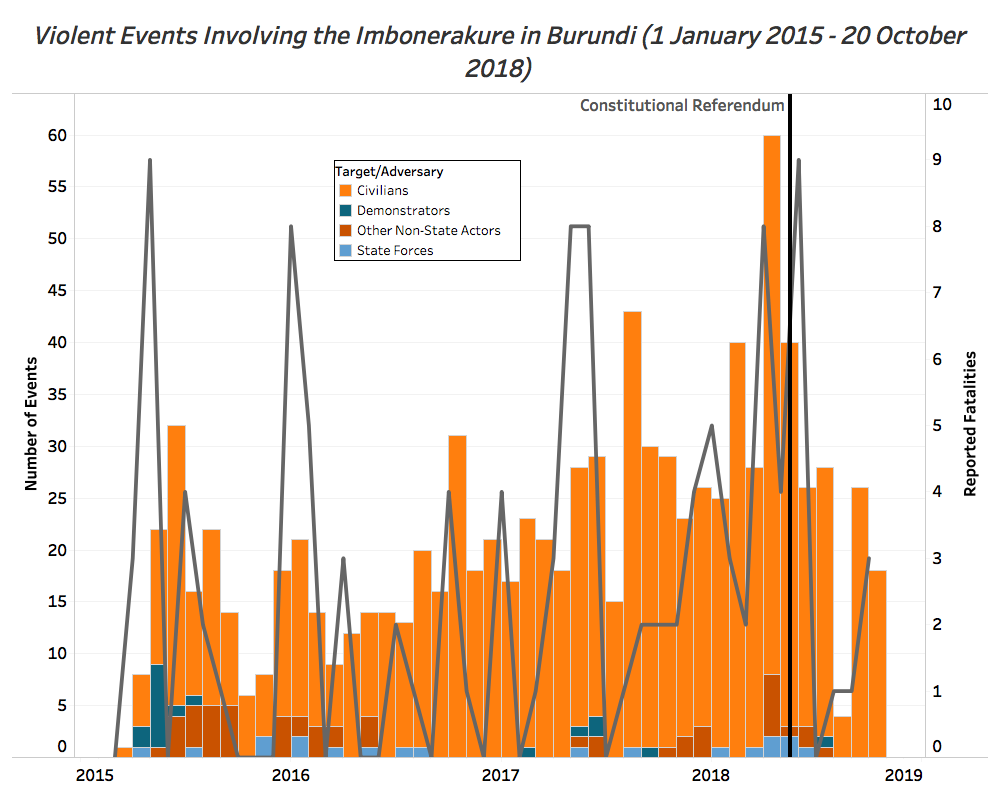 Reporting from Human Rights Watch suggests that a number of the attacks on civilians in April 2018 were perpetrated to ensure that Burundians would vote ‘yes’ on a constitutional referendum held in May 2018. A number of Burundian and international activists have characterized the referendum as expanding the power of the president, empowering the office the power to change the distribution of government posts granted to different ethnic groups. The referendum also proposed extending the president’s term from five to seven years and included provisions that would enable incumbent Nkurunziza to remain in office through 2034 (The Guardian, 17 May 2018). Despite the referendum being approved by voters, human rights advocates have collected a number of instances in which the Imbonerakure has retaliated against those who voted against the referendum (Human Rights Watch, 18 September 2018). Since June 2018, there have been 48 events in which the Imbonerakure attacked civilians, resulting in 12 reported fatalities, suggesting that the Imbonerakure remains a persistent threat to civilian safety even when their previous violence has ensured the ruling party’s position is secure.
As demonstrated in the figure below, since 2015, violent activities involving the Imbonerakure have spread throughout the country.  Since 2015, the Imbonerakure has only expanded the number of provinces that is operates in; as of 2017, the militia was involved in violent activities in every province in the country. Particularly of note is the growth of violent activities near Burundian borders.  Human rights advocates have noted instances in which the Imbonerakure have set up checkpoints to prevent citizens from fleeing the country (United Nations Human Rights Council, 10 September 2018).

The Relationship Between the Imbonerakure and the Government
Credible accusations have been levied about the government’s support for the militia, through the provision of weapons and cooperation with the state’s formal security sector  (IRIN, 28 April 2015). The Burundian state and party officials deny any such relationship. While recognizing the capacity of the Imbonerakure to perpetrate human rights abuses independently, the United Nations Human Rights Council asserts that “the Imbonerakure often operate under the ‘effective control’ of the Burundian State” (United Nations Human Rights Council, 10 September 2018). The Commission asserted that the “Imbonerakure have continued to act on the orders of officials, including highranking officials, of the National Intelligence Service, the police and the Office of the President” (United Nations Human Rights Council, 10 September 2018). The report also noted that in some instances the Imbonerakure “have taken part in law enforcement operations or operations against opponents, acting alongside police or intelligence officers and in some cases wearing the same uniform or carrying the same weapons as the defence and security forces (United Nations Human Rights Council, 10 September 2018).
The government’s public distancing of itself from the Imbonerakure has been coupled with a lack of cooperation with, and sometimes outright hostility towards, international human rights bodies. According to Human Rights Watch, the Burundian delegation refused to answer questions from the UN Committee against Torture in July 2016, and “since 2016 the government has refused to share information or cooperate with the Commission of Inquiry on Burundi – twice threatening legal action against its members” (Human Rights Watch, 18 September 2018). The lack of cooperation with international human rights bodies mirrors the impunity enjoyed domestically by members of the Imbonerakure. Human Rights Watch noted in May 2018 that in “nearly all the 83 cases of human rights abuses documented by Human Rights Watch for this report, the individuals responsible and their commanders have not been arrested, charged, or tried, even when they have been identified by witnesses” (Human Rights Watch, 18 May 2018).
Conclusion
While some theories suggest that increased civilian targeting is a sign of an armed group’s weakness, the surge in civilian targeting by the Imbonerakure appears to be a situation in which the tactic is being adopted out of a position of confidence and privilege, rather than weakness. The Imbonerakure appears to be an instance in which the state has, at least in some instances, ‘contracted out’ violence against civilians (Raleigh, 2012).The state’s support (both tacit and overt) for the Imbonerakure’s activities, the atmosphere of impunity in which the group operates, and the group’s role in promoting the objectives of the ruling party suggest that the group’s violence and targeting of civilians will continue to surge.