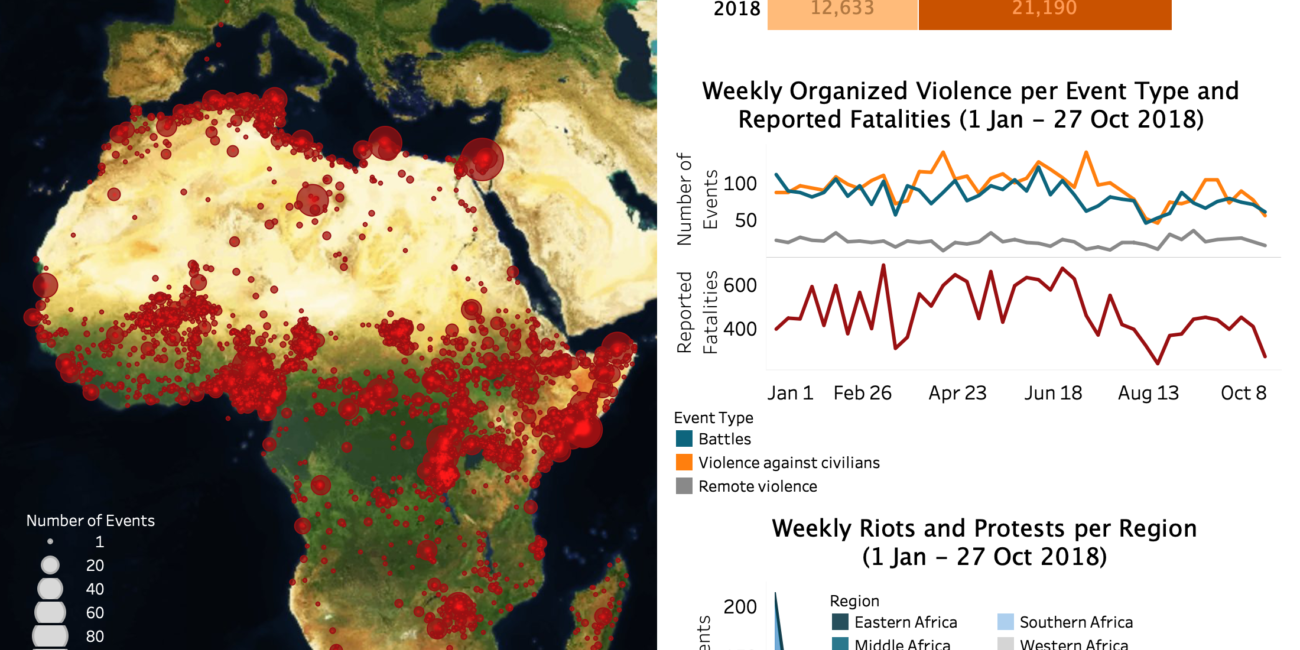 Key trends in the week of October 21st in Africa include the rise in fighting in Cameroon after the re-election of president Biya; the continuation of the Islamist violence and the rapid escalation of intercommunal violence in Mali; and other escalation triggers in CAR, DRC, Guinea and Ethiopia.
There were important developments last week in Cameroon. On October 22nd, President Paul Biya was unsurprisingly re-elected for a seventh term with 71% of the votes. Biya’s main opponent from the Movement for the Renewal of Cameroon (MRC), Maurice Kamto–who won 14% of the votes–rejected the official election results. Security was boosted in the capital Yaounde and in various MRC strongholds, such as Douala in Littoral, ahead of and after the results were announced. This led to large-scale arrests as MRC supporters took the streets on October 27th. Biya’s re-election also coincided with the launch of a series of new operations against separatist targets in the Anglophone regions. Fighting and targeted killings, mainly by the state forces, were reported in the Bui, Mezam, Messum, Dongo Mantung and Ngo Ketunjia districts of the Nord-Ouest region throughout last week. This resulted in nearly 70 fatalities – a visible escalation compared to the previous weeks. Cameroon signed a key partnership with Nigeria last week to tackle how the separatists exploit Cameroon’s porous borders to traffic arms and to recruit.
In Mali, Islamist militancy remains a key concern, while intercommunal violence is rapidly escalating. On October 27th, the Group for the Support of Islam and Muslims (JNIM) carried out two complex attacks on the MINUSMA in Ber (Tombouctou region) and near Batouma (Mopti), within a few hours of each other. In Ber, JNIM attempted to replicate the massive attack on the Timbuktu Super Camp (which harbors peacekeepers and French soldiers of Operation Barkhane) of April 14th, by deploying significant assets, including two suicide vehicle-borne IEDs, rocket-propelled grenades, and machine guns. Seven people were killed in the attack, including two Burkinabe peacekeepers, four militants and a civilian. In the later attack near Batouma, four Togolese peacekeepers were injured. Meanwhile, intercommunal violence in Mali has reached unprecedented levels as reported in the ACLED dataset. Violence against civilians perpetrated by communal groups doubled in October compared to each month, on average, since the start of 2018. The upward trend is mostly due to the regular and highly lethal attacks by the Bambara (Dozo) on Fulani communities in the Mopti and Segou regions. On several occasions last week, Fulani communities came under attack from Dozo militias, Dogon militias, and from military units in the Mopti region.
Developments last week also highlighted several potential escalation triggers.
In the Central African Republic (CAR) for instance, tensions are very high following the removal of Karim Meckassoua from the presidency of the National Assembly on October 26th. Meckassoua, a Muslim, was seen as a balancing force against the Christian presidency and his dismissal, if interpreted in religious terms, could trigger an escalation of the violence by ex-Seleka factions in CAR. The Coalition for National Defense and Security (CNDS) (a coalition of the four main ex-Seleka factions) – which announced its withdrawal from the Russia backed-Khartoum peace negotiations a week before Meckassoua’s withdrawal – denounced the move and allegedly gave an ultimatum to government agencies to vacate the areas under their control.
In the Democratic Republic of Congo (DRC), the response to the Ebola outbreak in Nord-Kivu continues to face major obstacles. On October 20th, Mayi Mayi militias killed two health agents responding to the outbreak in Butembo. Although numerous aggressions of health workers had been reported since the start of the Ebola response, these were the first fatalities. The Allied Democratic Forces (ADF) also continued their attacks in and around Beni, provoking riots by the populations who criticized the inability of the government to protect them.
Lastly, riots and protests in Guinea and Ethiopia illustrated the tense political climates prevailing in these countries. In Guinea, riots quickly erupted following an alleged assassination attempt against the main opposition leader from the Union of Democratic Forces of Guinea (UFDG), Cellou Dalein Diallo, on October 23rd. Diallo called on his supporters to protest the results of the municipal elections held back in February. In Ethiopia, members of the Amhara community in Alamata town protested against the forceful takeover and remapping of the area boundaries by the Tigray region. On October 21st, the police responded to the Amharas’ protest with gunshots, reportedly leaving six people killed and over 20 injured. Over 200 Amaharas suspected of being involved in the protests were subsequently arrested in Alamata town but the protests continued and spread to nearby towns such as Kobo and Mohny. 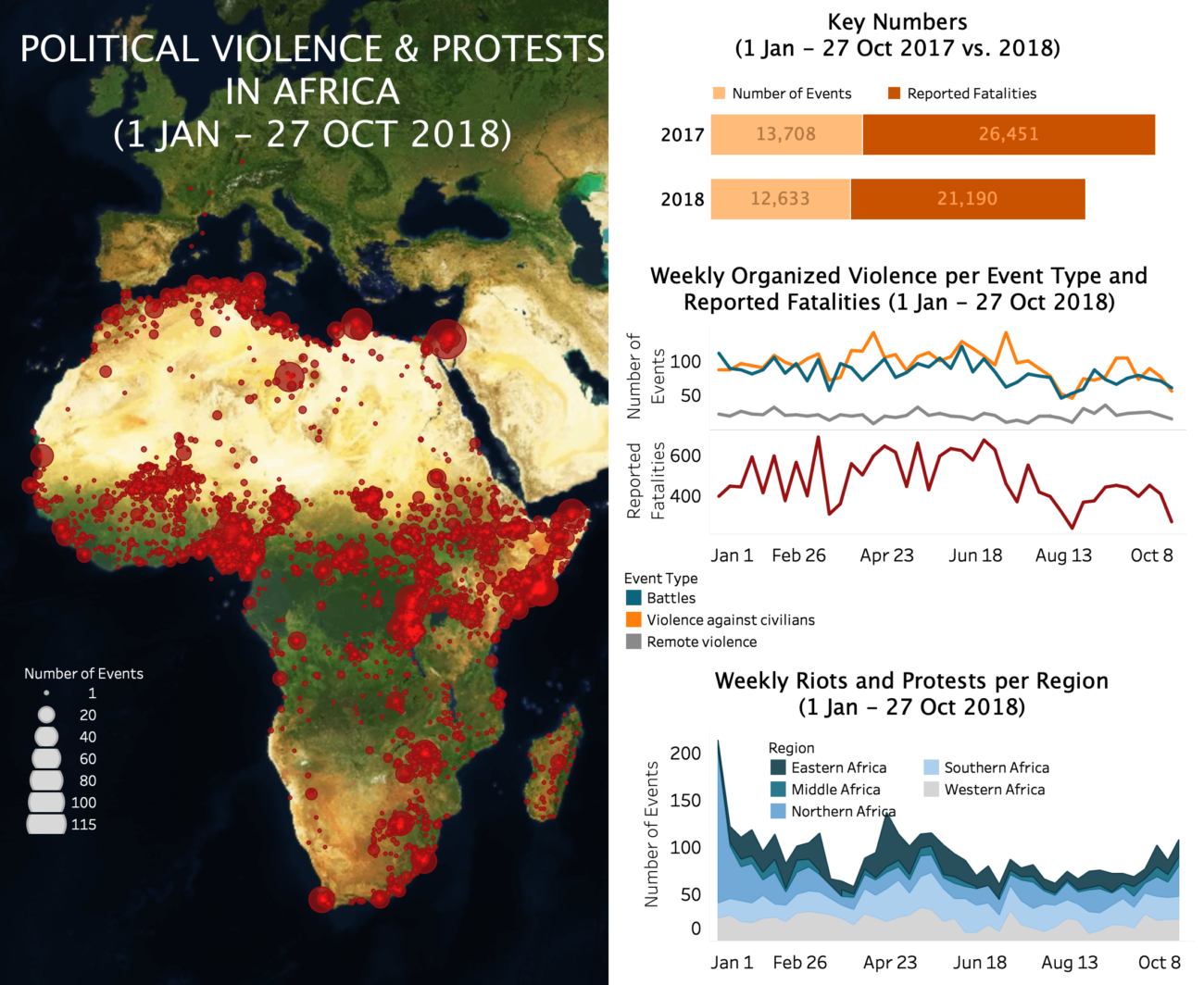