Disorder is spreading. While the overall scale of political violence slightly decreased in 2018, the scope expanded. Political violence and protest surged in more countries than they declined, and the total number of conflict-affected areas rose sharply around the world. Close-proximity violence against civilians[1] escalated, and half the countries across Africa, South & Southeast Asia, and the Middle East witnessed an increase in reported violent deaths.

A review of the Armed Conflict Location & Event Data Project (ACLED) 2018 dataset demonstrates that the global political violence landscape has substantially shifted over the past year, registering distinct threat patterns across each region of ACLED coverage. The number and type of organized violence and protest events; the volume of reported fatalities; the proliferation of armed actors; and the geographic footprint of violence – all vary markedly across time and location.

ACLED 2018: The Year in Review surveys and contextualizes these trends, providing a comprehensive look back at a year of evolving disorder.

Disorder is expanding. The number of locations affected by disorder grew by nearly 15% across Africa, Asia, and the Middle East in 2018, with an 11% increase in the geographic spread of organized political violence and a 24.5% increase for riots and protests. Nearly every country in ACLED’s coverage area experienced conflict in at least one new location in 2018, meaning that conflict occurred in not just more but also different areas. Over half of these conflict-affected locations were newly violent as of 2018, and the vast majority of new locations are proximate to previously active locations, indicating the expansion, rather than emergence, of new frontlines.

Levels of political violence plateaued in 2018, while demonstrations have surged. Disorder decreased slightly (by about 2%) from 2017 to 2018. Organized political violence specifically decreased by about 16%, pointing to the comparatively high level of demonstrations in 2018: close to 36,000 demonstrations occurred last year in 75 countries covered by ACLED. This is an increase of 33% across all regions, with the total number doubling in the Middle East and growing by over a third in South Asia.

Though conflict was less lethal overall, violent deaths have increased across half the countries in the dataset. The overall number of reported fatalities from all events decreased substantially (by over 22%) from 2017 to 2018, largely due to the lower lethality of major conflicts, such as the Syrian Civil War. However, half the countries in the ACLED dataset reported increases in violent deaths during the year, including Yemen, Saudi Arabia, Afghanistan, Mali, and Cameroon.

Close-proximity violence against civilians is increasing, though remote violence targeting civilians has declined. ACLED recorded approximately 1,000 more events of close-proximity attacks on civilians in 2018 than in 2017. Overall, civilians faced significant threats from conventional wars (Syria, Afghanistan, and Yemen), but also from government repression (the Philippines) and militia targeting (Nigeria and India). Remote violence targeting civilians declined largely due to a significant drop in the Middle East, even as it increased in other regions and in specific countries, including Yemen and Mali.

Conflict actors are proliferating. There was a substantial increase in conflict actors, with a 23% rise in the number of distinct, named actors from 2017 to 2018. Well over half of the 2,271 armed agents active in 2018 emerged that year, with over 1,400 new actors. Despite this, newly-emerged actors account for only 7% of the total number of organized violence events in 2018, demonstrating the entrenched nature of many of today’s most active conflict actors.

State forces are the most violent actors worldwide and are responsible for the most direct civilian fatalities. Despite the growing prevalence of non-state actors in conflict, state forces were the most violent actors in 2018. State actors in Yemen, Syria, and Afghanistan were active in the highest number of conflict events. State forces were also responsible for the largest number of civilian fatalities across regions, indicating non-state actors are not alone in the use of ‘terror tactics’ in civilian targeting.

Syria, Yemen, Afghanistan, and Iraq are home to the most violent conflicts in the ACLED dataset. Together, these four countries make up over 60% of all organized violence events recorded by ACLED in 2018. The Syrian Civil War continues to be one of the most devastating conflicts in the world despite a significant drop in violence since 2017, accounting for nearly 30% of total organized violence events in ACLED’s 2018 dataset – the most of any single country.

The Afghan War is the most lethal. Afghanistan was by far the deadliest country covered by ACLED in 2018, with nearly as many reported fatalities as Syria and Yemen combined, despite fewer conflict events. The Afghan War accounts for 30% of all fatalities recorded by ACLED during the year.

Syria is the deadliest place to be a civilian. Nearly as many civilians were killed in Syria last year as in Nigeria, Yemen, Afghanistan, and the Philippines combined — the next four deadliest countries for civilians. Nearly four direct civilian deaths are reported per 10,000 Syrians — excluding Syrians killed in the crossfires of battles (meaning the number of civilians killed is actually far higher).

The Philippines is a war zone in disguise. More civilians were killed in the Philippines in 2018 than in Iraq, Somalia, or the Democratic Republic of Congo — highlighting the lethality of President Rodrigo Duterte’s “War on Drugs”-cum-state terror campaign. Throughout the year, the Philippines saw similar levels of civilian fatalities stemming from direct civilian targeting as Afghanistan.

The threat for civilians in Mali continues to skyrocket. Despite a record 20-year high in the number of violent events in Mali in 2017, things further deteriorated in 2018 with a 40% increase in violence. What initially began as fighting between armed groups associated with different communities (counter-militancy operations and retaliations) has shifted dramatically toward civilian targeting. Civilian fatalities stemming from direct targeting via remote tactics rose in Mali in 2018, making it one of only a handful of countries across regions to see this trend, and second only to Yemen. 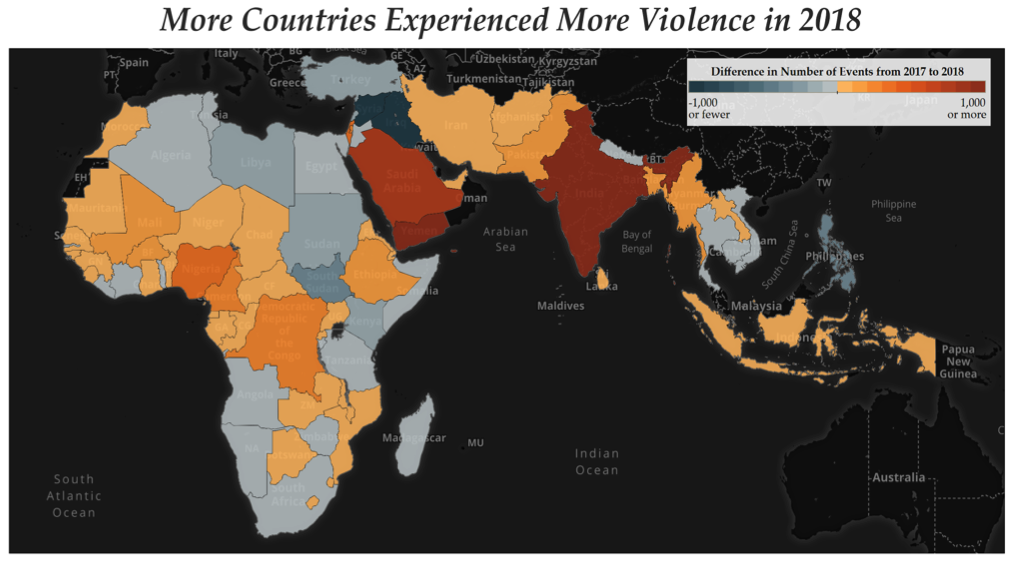