Key developments in Africa in the week of February 10th include the violence that has impeded elections in Nigeria, the instability in the post-election context in the DRC, and the risks in Egypt and South Sudan.
With Nigeria’s general elections originally set for February 16th, conflict levels have significantly risen ahead of the country’s vote over the past few weeks. Last week, they were the highest on the Africa continent, surpassing Somalia. The factors of instability in the electoral context are many-fold, and are all casting doubt on president Buhari’s ability to effectively run the country ahead of his bid for a new term. From rising Boko Haram militancy in the northeast, the persistence of “bandits” in the northwest, the communal violence in the southern half of the country, and the political party rivalries, the conflicts in Nigeria are distinct and rarely overlapping. Last week, in the northeast, Boko Haram militants attacked villages in the Madagali area of Adamawa state again, and infiltrated Maiduguri (Borno) on the day of the planned elections. The militants have made several new inroads in Adamawa state since the start of February, raising fears of an expansion of their operations southwards and provoking the deployment of new military troops in the area. In the northwest, “bandits” – which the government have been fighting for nearly a year – attacked civilians in the Gusau and Bukkuyum LGAs (Zamfara), killing at least 27 people. In Kaduna state, militiamen from the Adara ethnic group attacked members of the Fulani community in Kajuru LGA on February 11th and 14th, killing at least 66. Lastly, fighting was reported last week between supporters of the ruling All Progressives Congress (APC) and opposition People’s Democratic Party (PDP) and Accord Party (AP) in the Bayelsa, Adamawa, Osun and Delta states, leaving over 10 killed. The Independent National Electoral Commission (INEC) was also targeted on election week, with a vehicle carrying election material attacked in Logo LGA (Benue) and clashes involving INEC security guards in Nto Edino (Akwa Ibom). INEC ultimately postponed the elections from February 16th to 23rd, citing logistical challenges, in a move reminiscent of the 2015 elections.
Meanwhile, the post-election period in the Democratic Republic of Congo (DRC) remains marred by instability. The election of Tshisekedi as the new president of the DRC in January has urged over a hundred militiamen to lay down arms in the Kasai province, mostly from the Kamwina Nsapu. However, the lack of a formal program to demobilise and reintegrate them is becoming problematic in some cities. Last week, Kamwina Nsapu members occupied schools and extorted civilians upon laying down their arms in Kamako. In Nord-Kivu, fighting continues between various armed groups. The Nduma Defence of Congo (Renewal) continued to fight against Mayi Mayi Nyatura groups to solidify its control of the Bashali region of Masisi territory, while the Allied Democratic Forces (ADF) clashed again with the state forces north of Beni city. In Tshopo, fighting also erupted again as Mayi Mayi Mesandu troops seized control of Lowa from the FARDC. Lastly, two community attacks on Ebola health centers and structures were reported last week in Butembo (Nord-Kivu) and Mambasa (Ituri), showing the persisting opposition to the response to the outbreak.
Developments in South Sudan and Egypt last week also highlight significant risks in these two countries.
In Egypt, fighting between the military forces and the Islamic State continues unabated, with nearly daily episodes of air and ground shelling of villages by the military or of militant ambushes in the Rafah and El Arish areas of North Sinai. Last week, nine Palestinian civilians were reportedly killed when military forces artillery shelled and threw poisonous gas in a tunnel linking Egypt’s Sinai to Gaza. Meanwhile, the government is tightening its grip on the political opposition. Last week, the Egyptian Parliament approved in principle proposed amendments allowing President Al-Sissi to run for two other mandates and to strengthen his control over the judiciary. This came amidst several reports in recent weeks that a number of detained Muslim Brotherhood militants were executed after being tortured to confess to their crimes.
In South Sudan, fighting has intensified over the past three weeks in south-western parts of Central Equatoria between the factions in and out of the September 2018 Khartoum Declaration of Agreement. At least 24 battles have been reported between the government or Riek Machar’s Sudanese Peoples Liberation Army/Movement-In Opposition (SPLA-IO) and rebels of the National Salvation Front (NAS) or of the South Sudan National Democratic Alliance (SSNDA) coalition between January 1st-February 16th, resulting in over 100 fatalities. Intercommunal violence continues in other part of the countries in parallel. Whilst the fighting in Central Equatoria provides opportunities for the parties within the Khartoum agreement to cooperate and improve relations, there is a risk that the persisting intercommunal violence hides continuing fighting between the government and SPLA-IO through proxy forces. 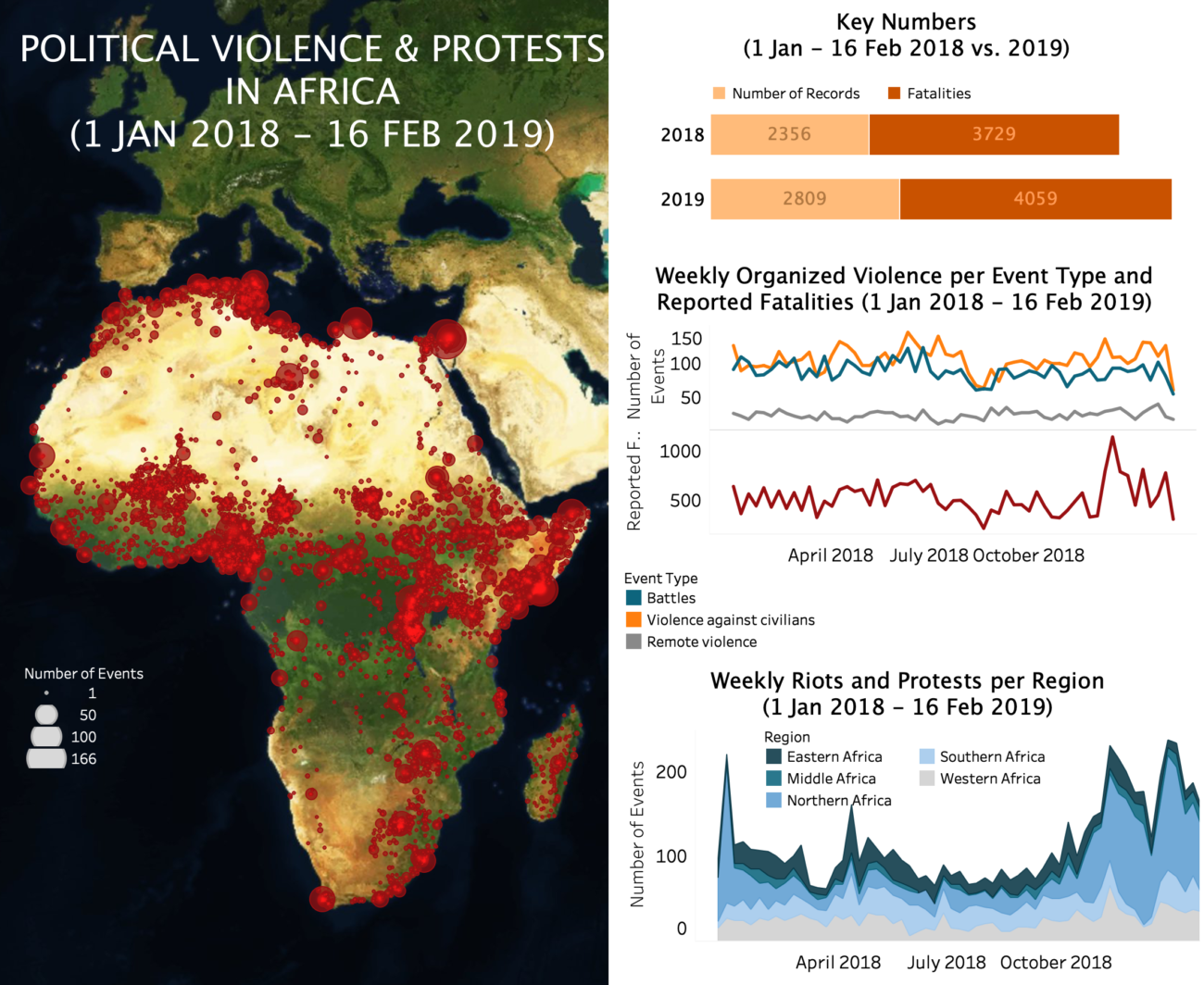