Key developments in Africa in the week of February 17th include a spike in violence in Nigeria ahead of the elections; violence in oil-field areas in Libya and Mozambique; and large anti-government protests in Egypt and Sudan.
As Nigeria headed to the polls on February 23rd with a week’s delay, political violence in the country remained higher than in any other African country. Violence involving militias affiliated with –and supporters of– the two main political parties, the ruling All Progressives Congress (APC) and the opposition People’s Democratic Party (PDP), spread across the country. In one case on February 21st, a suspected APC militia attacked a Senator and a PDP candidate’s convoy in Kofa (Kano), leading to a battle that reportedly left five people dead and 10 injured. In parallel, election material and staff of the Independent National Electoral Commission (INEC) were targeted, with one person counting the votes shot dead on election day in Ibadan (Oyo). Meanwhile, militant and communal violence posed key threats last week. Boko Haram attacked several military posts and villages around Maiduguri. In one instance, the militants beheaded 18 charcoal and firewood workers at Koshebe on February 18th; in another on election day, IS-led militants fired 10 missiles at Maiduguri and attempted to storm the city but were repelled by the military forces. Further south, an attack by Zamfara and Katsina “bandits” on February 20th was repelled by vigilante forces, leaving over 80 people killed, while armed Fulani pastoralists killed a reported 16 civilians in Agatu LGA (Benue).
Political violence rose in Libya last week as Haftar’s Libyan National Army (LNA) forces continued their offensive launched early February in the South to regain Murzuq from Tabu militias and Chadian armed groups. The army regained control of Murzuq after conducting at least six airstrikes and fighting the militiamen in and around Murzuq on at least two occasions over February 17th-22nd. The fighting left at least 16 killed. The LNA forces also took control of the El-Feel (Elephant) Oil Field. Murzuq is a strategic area for the LNA as a hub for the Tabu people–who oppose Haftar, as well as for the control the el-Sharara oil fields.
Key oil-related developments also occurred in Mozambique last week. Suspected Ahlu Sunna Wal Jamaa (ASWJ) fighters conducted several coordinated attacks on members of the Anadarko Petroleum Corp and on villages on the road between Mocimboa da Praia and the Afungi peninsula (the company’s liquified natural gas construction site) on February 21st. At least one Anadarko worker was beheaded and a convoy attacked. These raids are significant as they show a shift in the insurgents’ mode of operation, from hit-and-run attacks on villages at night to higher-impact attacks on convoys in broad daylight; and in their tactics, by placing themselves as a strategic threat to the development goals of the country by targeting the billion-dollar international natural gas exploration projects ongoing in the region. The events will likely trigger a scaling up of the military’s response to the insurgency in the coming weeks.
Other key violent events in Africa last week include the abduction of hundreds of people in Galgaduud region in Somalia by Al Shabaab militants for not respecting the group’s new taxation directives, while the militants killed several government and military officials across other regions; the killing of the Deputy Emir of the Group for Support of Islam and Muslims (JNIM) and ten of his associates by French Barkhane forces on February 21st in Mali, a significant blow to JNIM whose activities across the region are reaching unprecedented levels in February; and the abduction of over 100 students in Kumbo in Cameroon’s Nord-Ouest region on February 16th as the Anglophone crisis continues.
Lastly, protests and riots last week reached among their highest levels recorded in the past year, mostly driven by trends in Northern Africa. In Algeria, tens of thousands of young people took the streets across 40 states starting February 15th to protest President Bouteflika’s bid for a fifth mandate in the upcoming April presidential elections. The movement is expected to grow as the protesters have been mobilised through social media, outside of political structures. Demonstrations are a daily occurrence in Algeria, mostly denouncing the quality of public services, including social housing, and labour issues. In Sudan, anti-government protests entered their third month, taking place around riverain areas of the country, and especially Khartoum. The security forces’ response to the wave of protests is doomed to become more violent in the coming weeks as President Bashir appointed a new cabinet with state governors all from military and police backgrounds and increased the power of the security forces by declaring a year-long state of emergency. 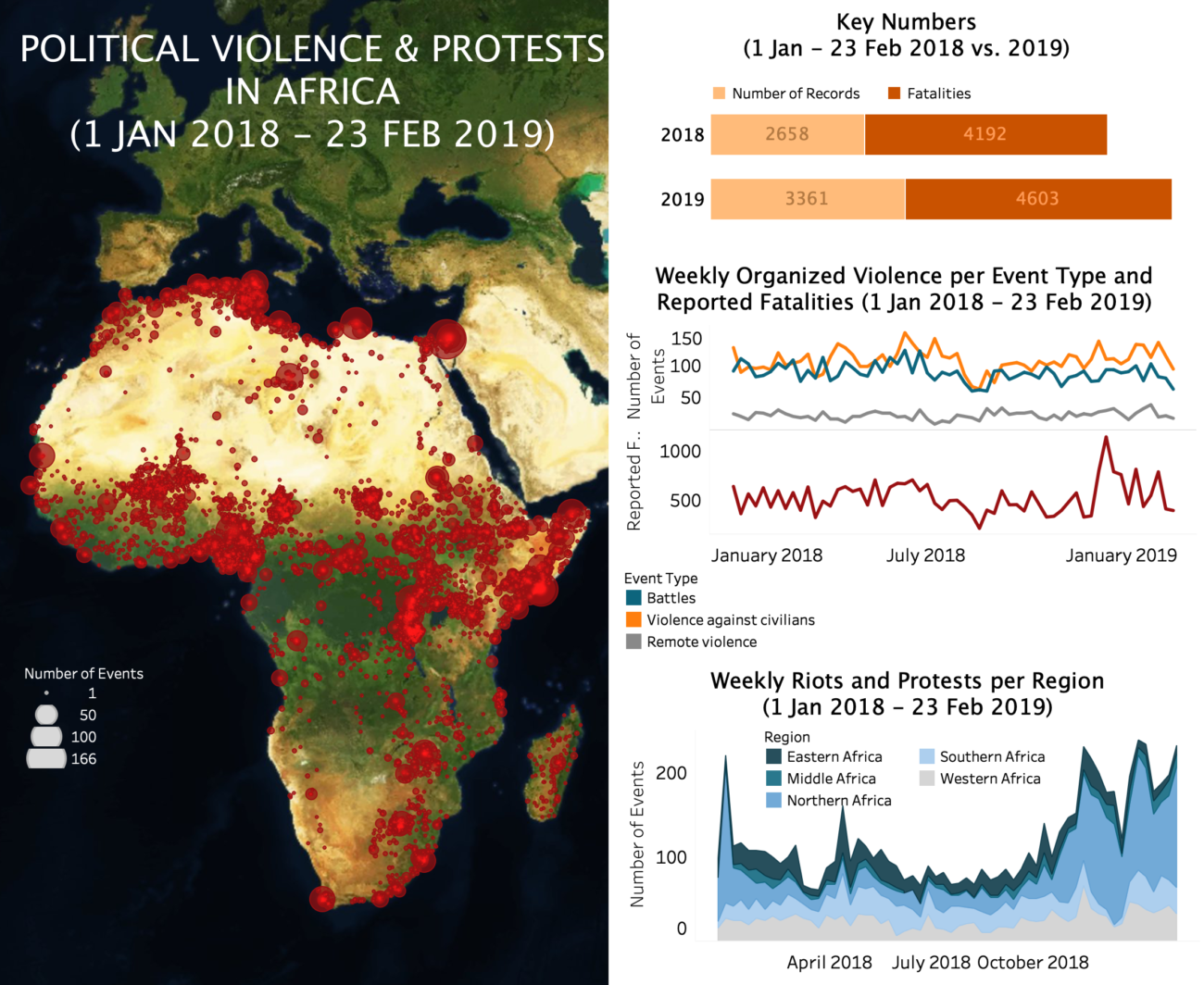