Key trends in Africa in the week of March 3rd include the sustained violence in Burundi, the communal and election-related tensions in Nigeria, the rising attacks by Mayi Mayi militias in the DRC and the threats to the peace process in CAR.
In Burundi, the UN Human Rights Office announced its official closure last week. The move came three months after the organization was ordered to do so by the Burundian government on the basis that sufficient progress had been made to establish mechanisms to protect human rights. Political violence levels remain sustained in the country, however. Over 130 events have been recorded so far in the ACLED dataset since January and 57 associated fatalities, mainly stemming from the daily reports of attacks, assaults and abuses against civilians nationwide. Attacks by unknown gunmen on people in bars or in their homes, as well as local vigilantism against people accused of witchcraft, occur regularly. But the bulk of the violence  (62% of violence against civilian events since January) consists of attacks by police and members of the ruling National Council for the Defence of Democracy’s youth wing, the Imbonerakure, on opposition party representatives, on civilians not following their orders, and on women. Recently, a wave of attacks (nine) have targeted supporters of the newly formed National Congress for Liberation (CNL) in various areas. In one case, Imbonerakure youth allegedly beat a CNL member to death in Kayanza province on February 21st; last week, on March 6th, they seriously assaulted three CNL members in Cunya (Cibitoke), accusing them of holding a secret meeting. The CNL was formed by Agathon Rwasa, a former member of the Amizero y’Abarundi coalition, after the May 2018 Constitution forbade independent coalitions from running in elections. Although the Parliament’s recognition of the new party was welcomed by the opposition, the CNL and other opposition groups will likely face further constraints ahead of the 2020 elections.
Important activity also took place in Nigeria, the Democratic Republic of Congo (DRC) and the Central African Republic (CAR) last week.
In Nigeria, communal violence is rapidly increasing in Zamfara state. Last week, at least 90 people were reported killed in attacks by Zamfara “bandits” on villages in the Tsafe and Shinkafi LGAs (Zamfara state). The attacks were repelled in Tsafe by the Civilian Joint Task Force. Meanwhile, election-related violence and protests continued as citizens headed to the polls again last week for the regional elections. Violence involving militias affiliated with –and supporters of– the two main political parties, the ruling All Progressives Congress (APC) and the opposition People’s Democratic Party (PDP), was reported across the country. In a violent clash between PDP and APC militias over vote-buying in Ibadan (Oyo state), two people were shot dead. On March 9th(election day) unknown gunmen also abducted staff members of the Independent National Electoral Commission (INEC) in Katsina and Benue states, as well as burned election material and intimidated voters in many other areas. These events, combined with the emerging protests denouncing irregularities in the presidential election, highlight the few hopes for stability in the post-election period.
In the DRC, heavy clashes involved Mayi Mayi militias last week. Reports pointed to 28 people killed in clashes between Mayi Mayi militias of various ethnic alignments in the Minembwe area (Sud-Kivu) early March. In Nord-Kivu, Mayi Mayi militias clashed with the Nduma Defence of Congo-Renewal faction in Masisi territory, leaving a reported 11 killed; attacked state forces in Butembo and Rutshuru; and attacked another Ebola treatment center in Butembo, where they also clashed with police.
In CAR, developments threatened the peace agreement reached in February in Khartoum. The Popular Front for the Renaissance of Central Africa (FPRC) and Democratic Front for the People of the Central African Republic (FDPC) withdrew from the peace process over lack of inclusivity in the unveiling of the new ministers on March 3rd. Later in the week, two FPRC combatants were wounded by Anti-Balaka fighters outside of Bria. Tensions also rose in the capital Bangui as a new KM5 militia led by Mahamat (a.k.a. LT) seeks to assert itself in the KM5 neighbourhood with the weakening of that led by Nimeri Matar (a.k.a. Force). The new LT militia clashed with street vendors in the area, who refused extortion attempts by the group. 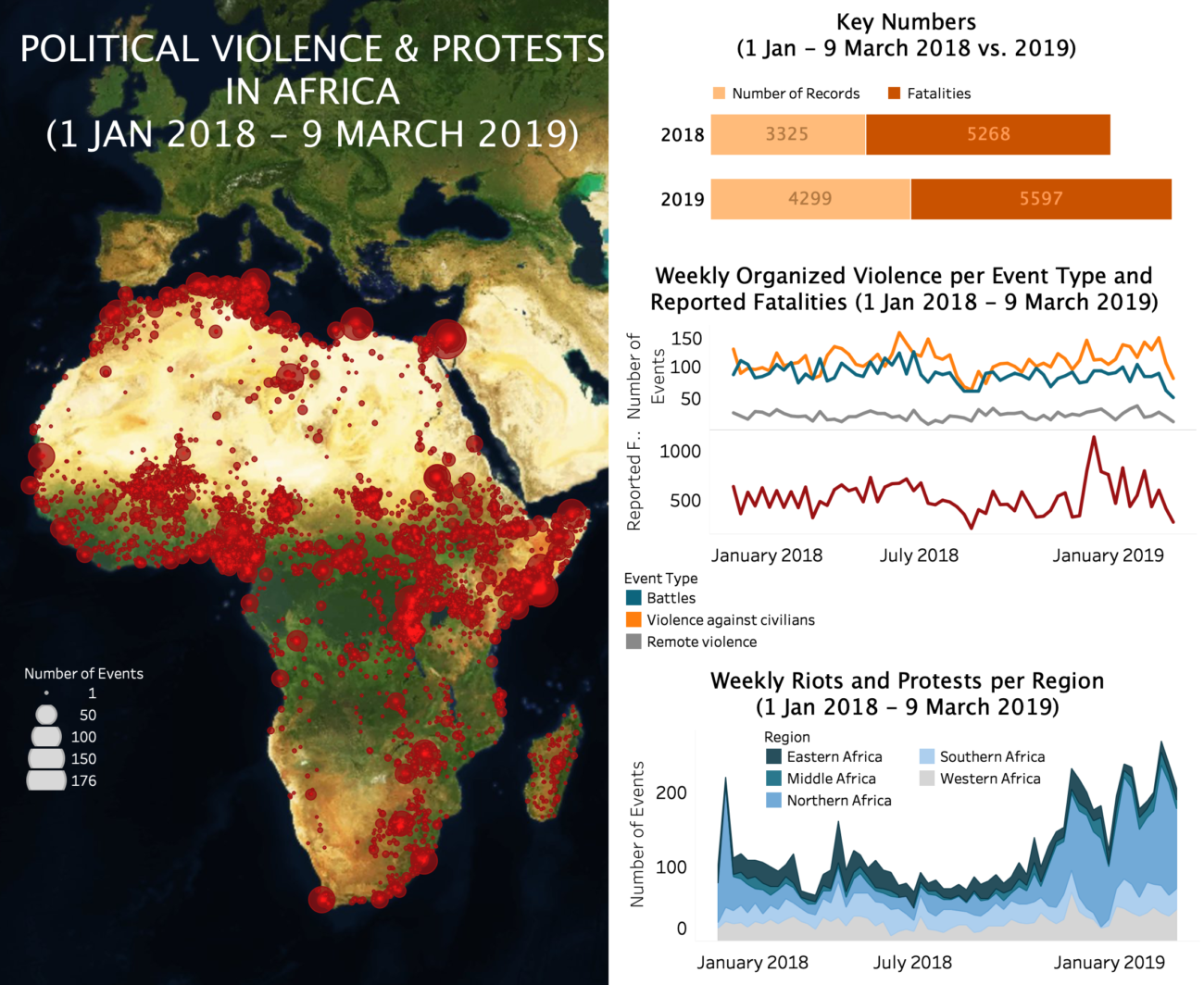