Developments in Africa during the week of March 10th highlight the continued jihadist threats in Somalia, Mali, and Niger; the renewed violence by Fulani pastoralist militias in Nigeria; the violent state response to the continuing insurgency in the Anglophone Cameroon; and the high pace of demonstrations across a number of African countries.
In Somalia, the government and international offensives against Al Shabaab militants spiked last week in the Lower Shabelle and Lower Juba regions. US-backed forces from the Somalia Danab special battalion raided several strongholds belonging to the group in Qoryooley and Afgooye districts (Lower Shabelle), as well as in the Jamaame district (Lower Juba) alongside Jubaland forces. In both areas, the US air force came in a day later to launch airstrikes. The Kenyan forces also conducted at least two airstrikes against Al Shabaab positions in Ceel Waad (Gedo) and later clashed with the militants. Al Shabaab showed its reactivity by targeting military and AMISOM troops in both regions in turn.
In Mali, on March 10th, the French forces of Operation Barkhane thwarted a complex attack against their forces by presumed Islamic State (Greater Sahara) militants near Akabar (Gao region), along the border with Niger. 15 soldiers were wounded. Violence levels have reduced in Gao in recent months, with much of the ISGS activity in the region consisting of targeted attacks against members of the Dawsahak and Tuareg communities and the last operations by French forces reported end December 2018. Yet, the attack on March 10th showed the ISGS’ continued presence in the region and high interoperability.
In Niger, Boko Haram militants aligned to the Islamic State (ISWAP) have steadily increased their attacks in the Diffa region since late November 2018. Last week, they attacked Nigerien forces in Toumour on March 13th aboard multiple vehicles including at least one laden with explosives, reportedly killing six soldiers. The counterattack by the Nigerien forces left 30 militants also killed. The next day, the militants targeted forces of the Nigerien and Multinational Joint Task Force (MNJT) at the Diffa Airport with three grad rockets. These attacks show the persistence of the ISWAP threat despite the large-scale MNJTF operations conducted end December 2018 in the Lake Chad islands that left a report 287 militants killed.
Other notable developments during the week of March 10th were the communal violence in Nigeria and the violent state response to the insurgency in Anglophone Cameroon.
In Nigeria, communal violence continues to rapidly increase. On March 11th, Fulani pastoralist militias killed nearly 100 people in several simultaneous attacks along the border between Kajuru and Chikun LGAs in Kaduna state. This brings the reported number of fatalities from violence involving Fulani pastoralist militias to 132 over March 1st-16th, compared to only 53 over January and February. If the conflict trend follows that of 2018 –where violence involving these groups peaked, resulting in an estimated 2000 fatalities– the next three months may be particularly violent in Nigeria.
In Cameroon, the launch of military operations to find separatists in villages in the Menchum, Donga-Mantung and Bui departments (Nord-Ouest province) resulted in violence that left at least 12 civilians killed and many homes burned down.
Lastly, protests continue to spread in various part of Africa. In Algeria, large-scale demonstrations calling for regime change entered their fourth week last week as President Bouteflika announced that he would not seek a fifth term but that the elections were delayed. Meanwhile, daily protests continue to rock Tunisia and Morocco over social and economic integration. In Sudan, daily protests against President al-Bashir are also continuing. Around 400 protests and riots have been reported since the beginning of the movement in early December 2018 – this compares to only 209 such events in the whole of 2018. And in Benin, around 20,000 supporters of opposition parties protested their exclusion in the upcoming April legislative election in Cotonou. Similar protests had occurred earlier in March and left one rioter killed in clashes with the police. 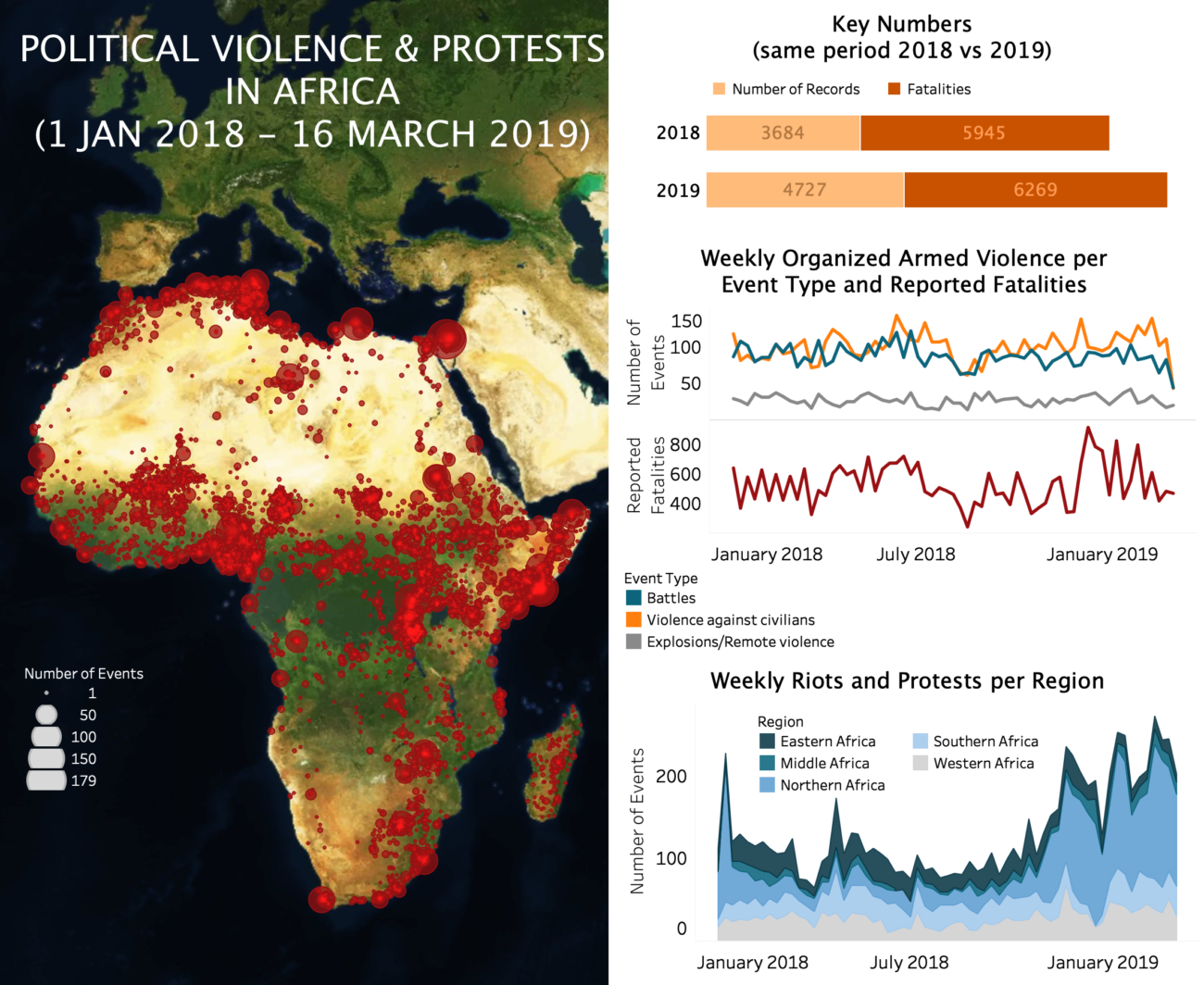