Key developments in Africa in the week of April 7th include the coup in Sudan, the intensification of fighting in Libya’s Tripoli, and other high-impact attacks in Egypt, the DRC, South Sudan and Nigeria. Relevant demonstrations also spanned South Africa, Togo and Gabon.
In Sudan, elements of the Sudan Armed Forces (SAF) on April 11th enacted a coup against President al-Bashir. The coup came after four months of uninterrupted demonstrations in major towns of the country. The demonstrations were initially triggered by price increases but they quickly morphed into contestations of the regime of al-Bashir. Over 500 protests and riots have been recorded in the country between mid-December 2018 and April 13th, 2019, resulting in over 50 reported fatalities. Last week, tensions surfaced within the security apparatus during a large sit-in outside of the army headquarters in Khartoum. Some soldiers clashed with pro-government forces (primarily agents of the National Intelligence and Security Services (NISS) and irregulars in civilian clothing) on several occasions while seeking to protect the demonstrators. This laid the groundwork for the soldiers to start coup actions on April 11th. The coup unfolded with seemingly a lack of planning: the SAF elements placed President al-Bashir under house arrest, arrested several of his aides and senior NCP figures, suspended the Constitution and declared a new state of emergency and curfew. They quickly reshuffled the transitional council after an initial declaration of a two-year military government headed by defence minister and first vice-president Lt Gen Ibn Auf provoked further demonstrations, appointing Lt Gen Abdel-rahman Burhan instead. The short-term prospects are mixed. On the one hand, there is a likelihood that the number of demonstrations reduces in the coming days and weeks if the military government follows up on its proposal for a reduced period of military rule and paves the way for a civilian transitional government. On the other hand, there are lingering doubts about the level of endorsement of the military government by key security services, including the Rapid Support Forces (RSF), the NISS and the police, as well as by less senior SAF commanders and soldiers. These have the potential to introduce further instability into the military-political system in the short-term as the security organs jostle for influence.
In Libya, the fighting between troops of the Libyan National Army (LNA) of General Haftar and of the UN-backed Government of National Accord (GNA) continued unabated in and around Tripoli for a second week. At least 37 episodes of battles, airstrikes and shelling have been reported in and around Tripoli over April 7-13th, mostly around the Tripoli International Airport, the Mitiga airport and Ayn Zarah. The GNA started to reverse the initial gains made by the LNA. The number of reported casualties from the fighting rose five-fold within the span of one week: from 21 people reported killed and dozens wounded as of April 7th to 121 people reported killed and 561 wounded as of April 13th. The UN cancelled the National Conference on a unity government planned for mid-April between the parties due to the intensification of the fighting. Meanwhile, Islamic State militants gained some grounds against the LNA further south, in Al Fuqaha.
Other high-impact attacks were also carried out in Egypt, the Democratic Republic of Congo (DRC), South Sudan and Nigeria last week.
In Egypt, whilst continuing its attacks against state forces in Sinai, Islamic State militants carried out a rare suicide attack last week in a crowded market in Sheikh Zuweiyid in Rafah, leaving at least seven people reported killed. A rare attack was also recorded in Cairo by unknown gunmen against a police patrol on April 7th.
In the DRC, the FARDC launched offensives against Burundian rebel groups of the National Forces of Liberation (FNL) and Republican Forces of Burundi (FOREBU) in Sud-Kivu after clashes in the Mwenga area the week before. Three soldiers and 36 militia members were reportedly killed in three days of operations between April 9-12th in the Uvira and Mwenga areas. Events involving these groups have been rare since the Burundian military and Imbonerakure youth crossed into the DRC in late January-early February 2019 to pursue them.
In South Sudan, cattle raids by members of the Murle group in the disputed Boma state in Jonglei continue to be frequent. Last week, at least 50 people were reported killed in fighting that ensued after cattle raids in Boma state over April 9-10th. And in Nigeria, violence flared up again in various states: in Katsina state, unknown gunmen attacked villages and fought with local vigilante militias over April 7-9th, leaving at least 47 people reported killed; in Zamfara state, the Nigerian airforce launched new airstrikes against positions of “bandits” including herders in the forests, leaving dozens killed.
Lastly, some relevant demonstrations observed last week in Africa span South Africa, Gabon and Togo.
In South Africa, there have been high numbers of demonstrations, particularly riots,  since the beginning of 2019, a majority of them revolving around service delivery. The trend continued last week and is expected to do so in the coming weeks as South Africa heads towards its general elections on May 8th.
In Togo, tensions rose after the government decided to ban protests by the Pan African National Party (PNP) in seven out of ten towns where the party intended to organize marches on April 13th. The PNP activists still protested against the government in several towns, demanding new reforms and the release of political detainees. The death of one of the PNP activists during a peaceful protest in Bafilo, Kara, might trigger further demonstrations next week.
And in Gabon, thousands of students took the streets of nine major cities across the country over April 8-9th to protest a reduction in university grant support. 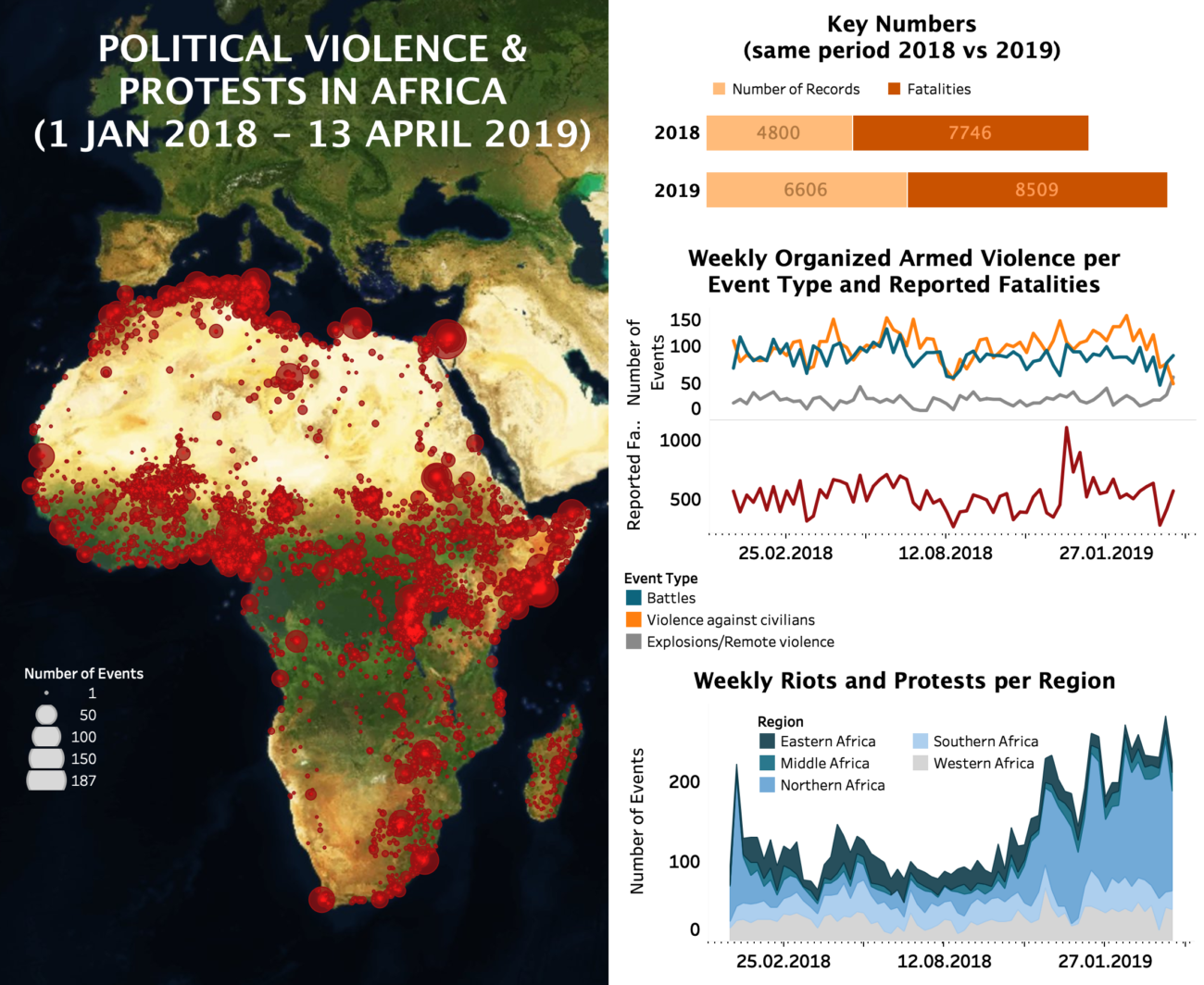 The Armed Conflict Location & Event Data Project (ACLED) is a disaggregated conflict analysis and crisis mapping project. ACLED is the highest quality, most widely used, realtime data and analysis source on political violence and protest in the developing world. Practitioners, researchers and governments depend on ACLED for the latest reliable information on current conflict and disorder patterns.
16 April 2019
Share
TweetShare on Twitter Share on FacebookShare on Facebook Share on LinkedInShare on LinkedIn