Key developments in Africa in the week of April 14th include the escalation of threats in the DRC’s North-Kivu province; the heavy battles against Boko Haram in the Lake Chad area amid changing risks posed by the groups; and the violence in Nigeria, Somalia and CAR.
In the Democratic Republic of Congo (DRC), the Islamic State (IS) claimed for the first time an attack on the FARDC in Bovata in the Kamango area of North-Kivu on April 16th. The attack left at least two soldiers killed and one civilian injured. Local sources attributed the attack to the Allied Democratic Forces (ADF) who have been highly active in the area in recent months – five days earlier, they killed six civilians in the Kamango area, around a dozen kilometers away. The Bovata attack comes a few weeks after President Tshikedi warned that an Islamic threat was stemming from the ADF. He asked for greater international support as IS could seek to take advantage of the instability in parts of Middle Africa through groups like the ADF, leading to the establishment of a caliphate. There has been a significant scaling up of the ADF violence in Nord-Kivu over the past five months, amid the presidential elections and the ongoing Ebola outbreak. Half of the violence is targeted at civilians, through regular attacks and abductions in villages in the Oicha area, which the FARDC and MONUSCO sometimes repel. This is an important shift from the group’s previous mode of operation, which predominantly consisted of battles against the security forces. In a rare incursion into Irumu territory (Ituri province) where they abducted 36 civilians on April 3rd, the ADF asked the FARDC to allow them to move freely in the area and access markets to stop its attacks on the civilian population. Elsewhere in Nord-Kivu, tensions around the response to the Ebola outbreak persist and are set to continue as armed groups have threatened to target anyone involved in the Ebola campaign (including journalists). There were a number of attacks in Butembo last week, including one by suspected Mayi Mayi fighters at the Ebola clinic of the Catholic University of Graben who killed a Cameroonian doctor (the Mayi Mayi told the medical staff that Ebola was not real and accused them of killing people); and one by unknown gunmen against the Ebola center in Katwa, which was thwarted by the security forces.
Along the shores of the Lake Chad, heavy battles engaged Boko Haram militants and military forces last week. On April 13th, joint clearing operations by the Nigerian and Cameroonian forces in the Kukawa area of Nigeria’s Borno state left 27 militants killed. In subsequent days, Boko Haram militants tried to launch several attacks against state forces around the Lake but were repelled. They attacked the Chadian army in the Bohouma area in Chad on April 15th, killing seven soldiers but reportedly losing 63 fighters in the soldiers’ counter-attack. Boko Haram militants targeted Chadian troops again the next day, this time on the Nigeria side, where Chadian forces have been deployed since end February to support Nigeria’s fight against the militants. The fighting occurred in Cross Kaura in the Magorone area and left 55 killed, including 53 among the militants. Meanwhile in Cameroon, Boko Haram militants attacked civilians on several occasions in the Kolofata area of the Extreme-Nord region over April 16-18th, leaving a reported 10 killed. The threat posed by Boko Haram in the Lake Chad area is increasing. The militants have maintained higher-than-average violence levels in recent months. Notably, the geography and nature of the violence has changed: since the February elections in Nigeria, the majority of Boko Haram events have been reported outside of Nigeria (80% of the Boko Haram violence in March occurred in Niger, Cameroon and Chad); the violence also appears to more targeted at civilians than ever before.
Other relevant developments last week span Nigeria, Somalia and the Central African Republic.
In addition to the threat posed by Boko Haram in the northeast, Nigeria continues to be deeply destabilized by intercommunal violence. The Nigerian forces have been conducting regular clearing operations against so-called “bandits” including armed pastoralists for over a year in several states but communal militias continue to launch large-scale attacks against civilians. Last week, on April 14th, 16 people were killed at a naming ceremony in the Akwanga area of Nasarawa amid tensions between farmers and pastoralists in the area. A few days later, on April 17th, Fulani pastoralist militias killed 15 people and left three wounded in late night attacks on communities in the Numa area of Adamawa state. And on April 19th, unknown gunmen killed 11 people coming back from Church in Katsila-Ala of Benue state, while 40 others went missing.
In Somalia, Al Shabaab is launching hit-and-run attacks against Somali or AMISOM forces on a daily basis, regularly throwing grenades at the forces or detonating IEDs on their path. Last week, Al Shabaab engaged the AMISOM forces in Bakool, Middle Shabelle, Bay and Gedo regions in central Somalia on several occasions. The militants also claimed a high toll (15) in an IED attack against Kenyan forces in Lower Juba on April 16th. Meanwhile, new airstrikes by the United States were reported, one of which killed the IS Deputy Commander in Somalia in the Bari region.
And in the Central African Republic (CAR), the situation remains shaky. Last week, Ali Darassa, the leader of the Union for Peace in the Central African Republic (UPC), officially stepped into his role as military advisor to set up the “mixed military force” in Bambari (Ouaka prefecture) planned in the February peace agreement at a ceremony. However, this came amid suspected UPC attempts to secure the Zangba territory (Basse-Kotto), south of Bambari, raising doubts over the group’s commitment to the peace process. Since early April, the UPC has clashed on several occasions with self-defense militias in Zangba and attacked and burned down villages in the area, leaving 30 people reported killed – though new estimates could raise the death toll to over a hundred. 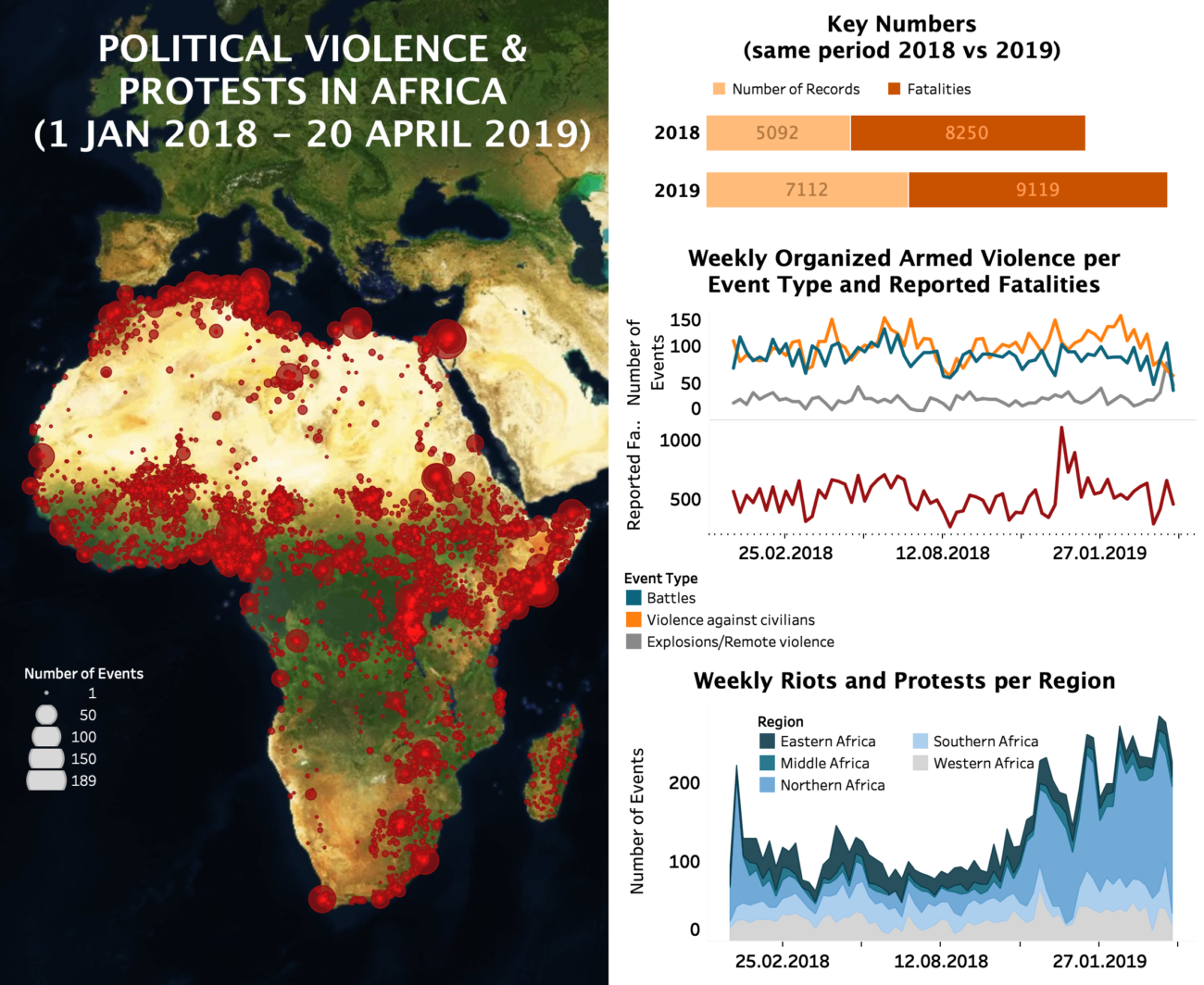 The Armed Conflict Location & Event Data Project (ACLED) is a disaggregated conflict analysis and crisis mapping project. ACLED is the highest quality, most widely used, realtime data and analysis source on political violence and protest in the developing world. Practitioners, researchers and governments depend on ACLED for the latest reliable information on current conflict and disorder patterns.
23 April 2019
Share
TweetShare on Twitter Share on FacebookShare on Facebook Share on LinkedInShare on LinkedIn