Last week, anti-government demonstrations in Albania flared and turned violent and anti-government demonstrations in Serbia appear to have lost momentum. The situation in Ukraine during and after the presidential elections on 21 April remained calm, while the conflict in Donbass continues. In Russia, demonstration event numbers remained low, but these may rise in the coming week.
In Albania, anti-government demonstrations flared and turned violent as demonstrators blocked the country’s main national crossroads and clashed with police. The opposition has been experimenting with various forms of demonstrations since mid-February, reiterating that rallies will escalate unless Prime Minister Edi Rama and his cabinet resign (Balkan Insight, 28 March 2019; Washington Post, 25 April 2019). Demonstrations have intensified as the main opposition, Democratic Party (DP), attempts to prevent the local elections set for 30 June, which they claim will not be free and fair without electoral reforms being made (BalkanEU, 12 March 2019)
In Serbia, anti-government protest event numbers continued to decline last week, confirming a trend that began mid-April. The grievances of these protesters have not been addressed and police did not physically crack down on the protests. However, the efforts of the demonstrators appear to have declined due to a lack of focus by the opposition, along with a strong campaign by president Vucic and the ruling Serbian Progressive Party (SNS) to counter anti-government protests (Balkan Insight, 24 April 2019). This campaign involved intimidation of transport companies to hinder attendance of anti-government protests (though without reports of physical violence) (N1, 11 April 2019) and forcing civil servants to attend the main pro-government rally (Serbian Monitor, 18 April 2019).
In Russia, there was another calm week with no battles, bombings, or attacks against civilians reported. Demonstrations in opposition to the pension and rubbish reforms continued, though with less involvement by the Communist Party of the Russian Federation (KPRF), likely due to its preparations for the traditional ‘1 May’ marches. Looking ahead, the so-called ‘sovereign internet’ bill, which would enable the government to control domestic internet traffic, is close to being signed by Putin (The Guardian, 28 April 2019). The proposed bill fueled protests earlier in March (Moscow Times, 10 March 2019) and similar internet crackdowns led to large protests last year (RFE, 1 May 2018).
In Ukraine, in the final round of the presidential elections held on 21 April — in which no significant incidents were reported — Ukrainians elected newcomer Zelensky over incumbent Poroshenko with 73% of the votes. In the days after, the situation remained calm with few demonstrations reported — similar to previous weeks (see this recent analysis piece). Elsewhere, in the Donbass region, fighting between Ukrainian government forces and separatist rebels continues, with 162 armed clashes and 130 shelling events reported last week, resulting in eight reported fatalities.
Other than these major developments, in the Balkans, Southeastern, and Eastern Europe, a handful of demonstrations took place around government policies, labour disputes, and other social issues — similar to that seen in prior weeks. The vast majority of these demonstrations were peaceful. There was no significant change in political violence levels; one bombing, several attacks against civilians resulting in one reported fatality, and no armed clashes were recorded in the region last week. 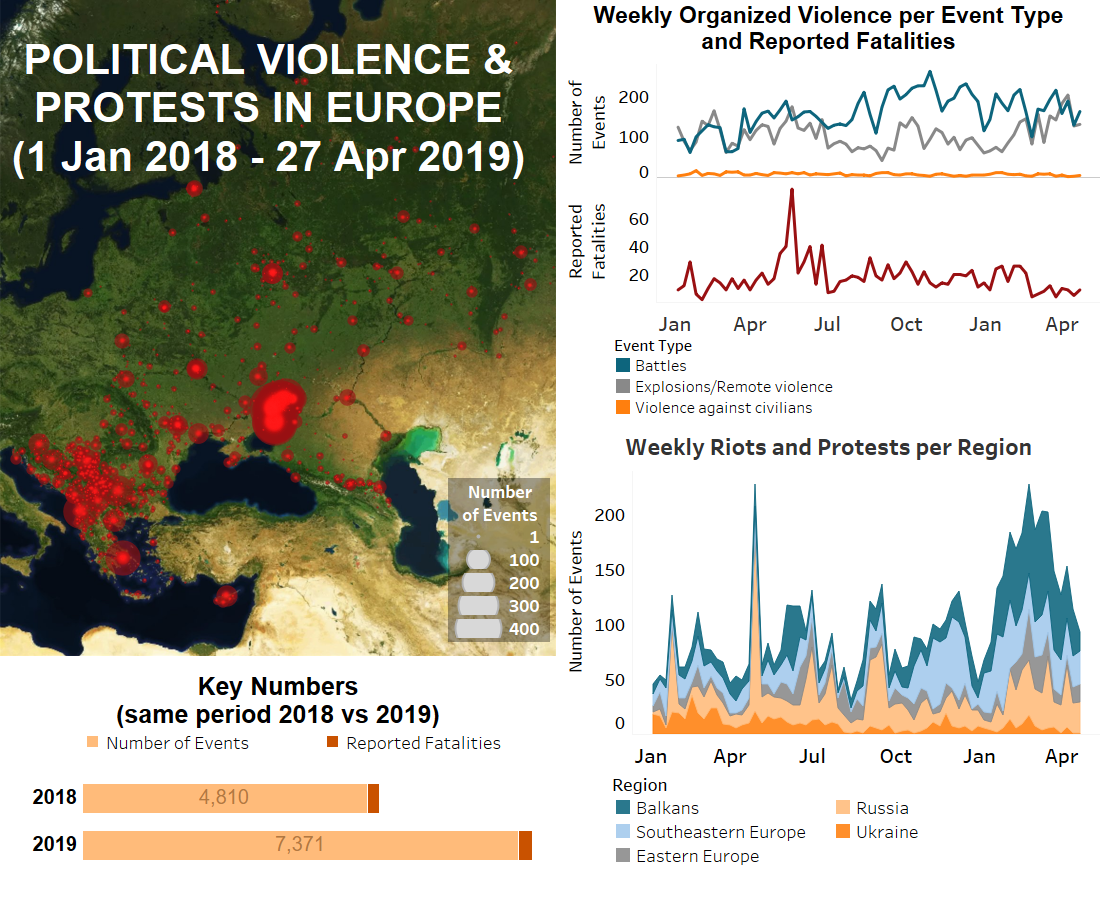