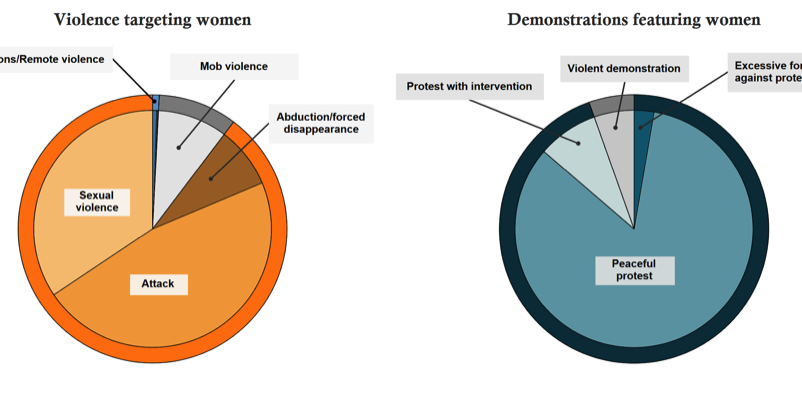 28 May 2019: Women around the world are facing unprecedented levels of targeted political violence. According to new data on political violence targeting women collated by the Armed Conflict Location & Event Data Project (ACLED) – in partnership with the Robert Strauss Center for International Security and Law at The University of Texas at Austin – the threat to women has grown in recent years, currently reaching some of the highest levels ever recorded.
The data capture information on political violence and demonstration events that occur within the public sphere, ranging from war-time sexual violence and attacks on female politicians to repression of everyday women trying to engage in political processes. They confirm a variety of expected threats, such as high levels of political violence targeting women during war, while also revealing surprising new trends, like the disproportionate use of intervention and excessive force against demonstrations featuring women.

Dr. Roudabeh Kishi, Research Director of ACLED: “Political violence targeting women, both sexual and otherwise, is on the rise — during and outside of war-time and election periods. Women of all walks of life, not solely politicians, increasingly find themselves in the crosshairs when engaging in political processes. Such violence is used to create high-risk political spaces, to humiliate and oppress women, and to prevent their effective political participation. New data from ACLED and the Strauss Center allow users to identify the chief perpetrators, map patterns of violence, and track emerging threats to women around the world as they engage in the public sphere.”

Anne Clary, Assistant Director of the Strauss Center: “ACLED represents a vital complement to the Strauss Center’s commitment to addressing issues of contemporary international importance. Political violence targeting women is a problem that intersects with a host of systemic ills. With these new data, the Strauss Center is proud to partner with ACLED to provide users with a key resource for events that are not readily available elsewhere and which can be used to assess larger trends.”

If you would like to use ACLED analysis or visuals, please review our Terms of Use and Attribution Policy.
The Robert Strauss Center for International Security and Law integrates expertise from across The University of Texas at Austin, as well as from the private and public sectors, in pursuit of practical solutions to emerging international challenges.

If you have questions about the data, please contact:
Sam Jones, Communications Manager
[email protected]