Developments in the Middle East region last week included a general reduction in conflict in Palestine, anti-corruption demonstrations in Israel and Iraq, and growing tensions between Iran and the US, as well as between Arabs and Kurds. Meanwhile, there were several updates in ongoing armed conflicts in Syria and Yemen.
Last week in Palestine, there was an overall reduction in armed conflict events. This trend is likely related to the holy month of Ramadan and the continued ceasefire with Israel. Clashes were reported between local Palestinians and Israeli forces in Bayt Furik, Saffa, Barta’a and Dheisheh refugee camp. Last week’s Return March in Gaza was smaller than usual with only 4,000 demonstrators reported to have attended. Attendance at the Return Marches has varied between 5,000 and 8,000 reported demonstrators throughout April and May. Clashes were reported between Israeli forces and demonstrators as well as some injuries, but no fatalities.
In Israel, meanwhile, tens of thousands of Israelis gathered in Tel Aviv Saturday night to demonstrate against Netanyahu’s proposed bill to grant himself immunity against prosecution. Protesters wore the Ottoman-style fezzes in reference to Turkish President Erdogan to symbolize the regime type that they oppose (Haaretz, 25 May 2019). Back in February, the attorney general said he was considering charging Netanyahu with fraud and bribery, however, no formal charges were filed. Netanyahu denies the allegations and has said he is the victim of a left-wing ‘witch hunt’ (BBC, 26 May 2019). Due to Netanyahu’s inability to secure a government since re-election, on 27 May, the Israeli parliament (Knesset) passed the first of three motions to dissolve the Knesset and call for another snap election (NBC, 27 May 2019). The deadline to form a government is Wednesday, 28 May.
Anti-corruption demonstrations continued in Iraq last week led by members and supporters of the Sadrist movement. While support for Muqtada al Sadr’s anti-corruption movement has been the primary theme thus far – and was the subject of at least one protest last week –  a wave of demonstrations led by the group also occurred in multiple cities on 24 May to denounce Iraq’s involvement in the Iran-US conflict. The Sadrist Movement holds the majority of seats in Iraqi Parliament and is a major member of the Popular Mobilization Forces (PMF), a collection of mostly-Shiite militias – many of which are backed by Iran.
The protests are fueled by fear within Iraq that growing tensions between the US and Iran could lead to another war on Iraqi soil. Iranian-tied groups within Iraq were warned recently by the Iraqi government to avoid any actions that may provoke an American retaliation (New York Times, 15 May 2019). American President Donald Trump has approved the additional deployment of US troops to the region amid growing tension (ACLED, 16 May 2019). US representatives have claimed that the Iranian Revolutionary Guard Corps is responsible for a ‘sabotage’ attack on four commercial ships near the port of Fujairah on 12 May, and that a rocket attack last week on the Green Zone in Baghdad – where the American embassy is located – was also carried out by an Iranian proxy group. Neither attack had any reported casualties (CNN, 24 May 2019).
Meanwhile, there were several reports of growing tensions between Arabs and Kurds in the disputed governorate of Kirkuk last week. On 18 May, it was reported that 600 Kurdish families had been expelled from their homes in Kirkuk by army forces along with Arabs, who overtook their homes. Local authorities claim that the expulsion was initiated by the Ministry of Oil. The move lends credence to the idea of a renewed Arabization campaign in Kirkuk, similar to the one instigated under Baathist rule (Rudaw, 8 August 2018). Kirkuk has been one of the main flashpoints in the conflict between Iraqi Kurdistan and the Central government, particularly following the 2017 armed recapturing of the provincial capital by Iraqi state forces. Kurdish Peshmerga forces initially took control of the city in 2014 during the Iraqi Civil War after Islamic State (IS) launched a major offensive causing state forces to flee the city (Washington Post, 16 October 2017). Reports of IS attacks on Kurdish homes were also reported last week in Dibis district, along the border with Erbil governorate.
For the third week in Syria, heavy clashes continued in the northwest along Greater Idleb’s DMZ between regime forces and pro-regime militias supported by Russian airstrikes, and rebel and Islamist factions. The main opposition group fighting regime forces is Hayat Tahrir al Sham (HTS). Hama and Lattakia governorates continued to be the main battleground as regime forces attempted again to advance toward Kabani village in Lattakia, with no success. Meanwhile, rebel factions and HTS recaptured the strategic town of Kafr Nabutha in Hama from regime forces for five days from 22 May to 26 May before regime forces regained control of the town. Russian and regime forces bombarded Kafr Nabutha and the surrounding area with airstrikes and shelling, which resulted in 87 reported civilian fatalities in the Greater Idleb area (Al Jazeera, 26 May 2019). This has been the most intense conflict between the regime and rebel forces in Syria since summer 2018.
In Yemen last week, clashes continued in Ad Dali governorate, with Houthi forces managing to re-take control of several areas, including positions in the districts of Qaatabah and Azariq. Meanwhile, less intense fighting continued in Al Bayda governorate and areas of the northern Sadah governorate. In the latter, anti-Houthi forces reported minor territorial gains in Hashwah district. Further clashes continued between anti-Houthi forces and Houthi fighters in Taiz governorate, with most of the fighting taking place west of Taiz city. Airstrikes by the Saudi-led coalition were reported throughout the northern region and resulted in a number of reported civilian fatalities. One high-profile strike on a gas station in Mawiyah district, northeast of Taizz, reportedly killed eight civilians.
Along the northern border, Houthi forces fired ballistic missiles and explosive-laden drones at multiple targets in Saudi Arabia throughout the week, including missiles that were reportedly shot down as far as Taif city. Drones were reportedly intercepted three days in a row as they attacked the Najran regional airport. 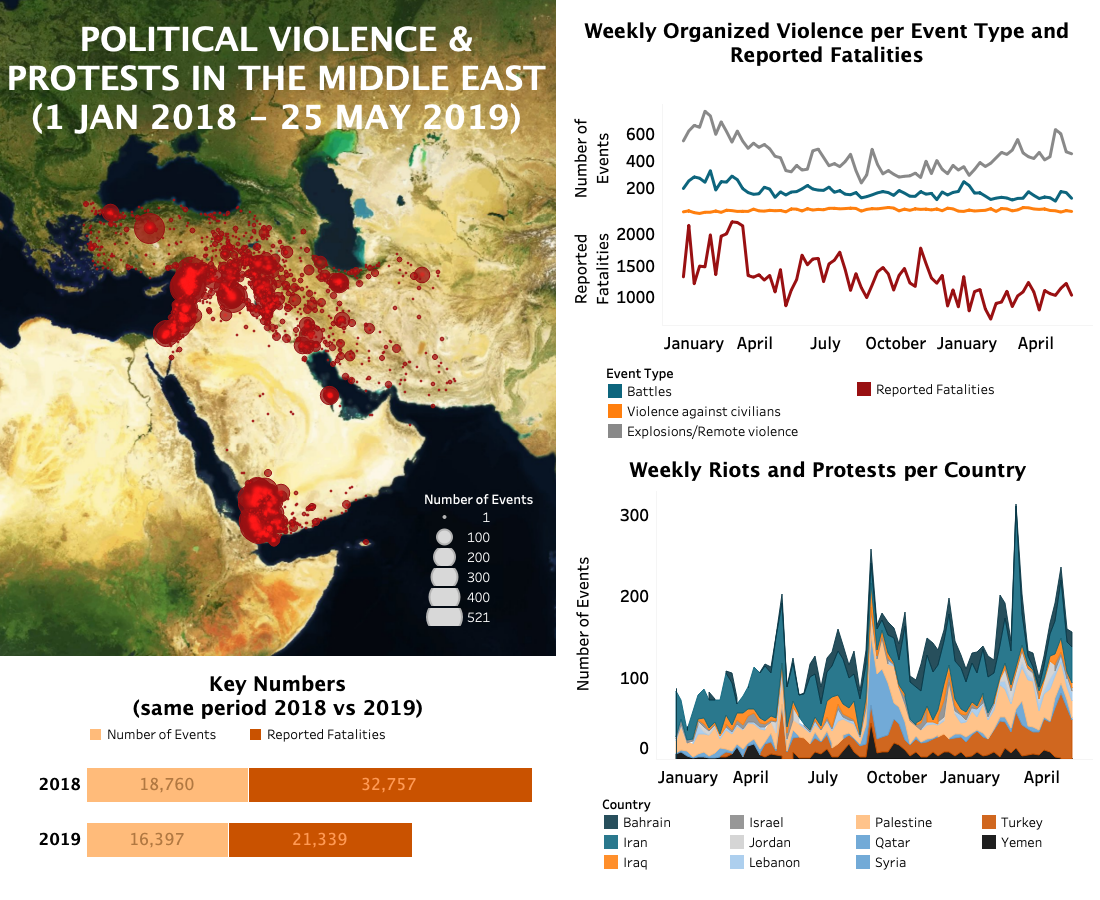