Last week, anti-government demonstrations in Albania, Serbia, and Romania continued. In Greece, there was again violence in support of hitman Koufodinas. In Ukraine, demonstration events were held in support of the sailors captured by Russia and fighting in the Donbass region continued. In Russia, demonstration events remained relatively low with two large demonstrations against waste management reform standing out. In addition, after a long period of no reported violence, an armed clash occurred in Dagestan.
In Albania, the general anti-government demonstrations continued. Although less violent than the previous ones amongst national and international appeal for a peaceful protest (Washington Post, 25 May 2019), it did involve violence by a small group of demonstrators and police intervention. In addition, students restarted their demonstrations claiming the government had not kept its promises on education reforms that were made after large-scale student demonstrations in December and January.
In Serbia, anti-government protests continued in a handful of cities similar to previous weeks. The opposition set up “free zones”, designated spaces for protest events and communication with citizens, in several more cities. In addition, anti-government protests were held in Montenegro, Kosovo, and Romania; and in Croatia, several large marches were organized in opposition of abortion rights.
In Greece, demonstrations and violent acts in support of Dimitris Koufodinas, a jailed hitman for the now-defunct Marxist militant group ‘November 17’, continued for the second week with various anarchist and far-left groups staging several attacks. Violent incidents, not related to the Koufodinas case, involving far-right groups and ‘hooded assailants’ assumed to belong to far-left groups were also reported, some targeting the election campaigns of Coalition of the Radical Left (SYRIZA) and Golden Dawn.
In Russia, demonstration activity remained relatively low with less than two dozen demonstration events reported, the most significant part directed against waste management reforms with large protests organized in Arkhangelsk (7×7, 19 May 2019) as well as in Saratov. After a long period of no reported violence, an armed clash occurred in Dagestan resulting in the reported deaths of 3 unidentified militants by law enforcement officers.
In Ukraine, demonstrations continued, this time primarily against the Russian government and in support of the Ukrainian sailors taken captive after the ‘Kerch Strait incident’ last November (RFE/RL, 25 May 2019). In addition, in a handful of demonstrations, supporters of the pre-reformed Ukrainian Orthodox Church voiced their protest against the newly established Orthodox Church of Ukraine. Near Odessa, a Moldovan national, part of the inner circle of former Transnistrian leader Yevgeny Shevchuk, was killed in an apparent assassination. In the Donbass region, fighting between Ukrainian government forces and separatist rebels continued with 131 armed clashes and 125 shelling incidents resulting in one reported fatality.
Other than the developments reported above, violence in the Balkans, Southeastern Europe, and Eastern Europe remained low, with one bombing in Croatia without reported injuries and attacks against civilians in Cyprus and Greece. In addition, off the coast of Romania, the Romanian coast guard fired on a Turkish fishing vessel illegally operating in the Romanian Exclusive Economic Zone (Deschide, 20 May 2019). Three fishermen were wounded. Similar incidents occur regularly, as poaching is a pervasive issue in the region, but such interceptions generally lead to arrests without injuries.
Throughout the Balkans, Southeastern Europe, and Eastern Europe regions, demonstrations were held at similar levels to weeks prior, sparked by various concerns including labour disputes, climate action and opposition to local construction projects. The EU parliamentary elections, which started 23 May and run up to 26 May, so far have not led to reports of significant demonstrations or incidents. 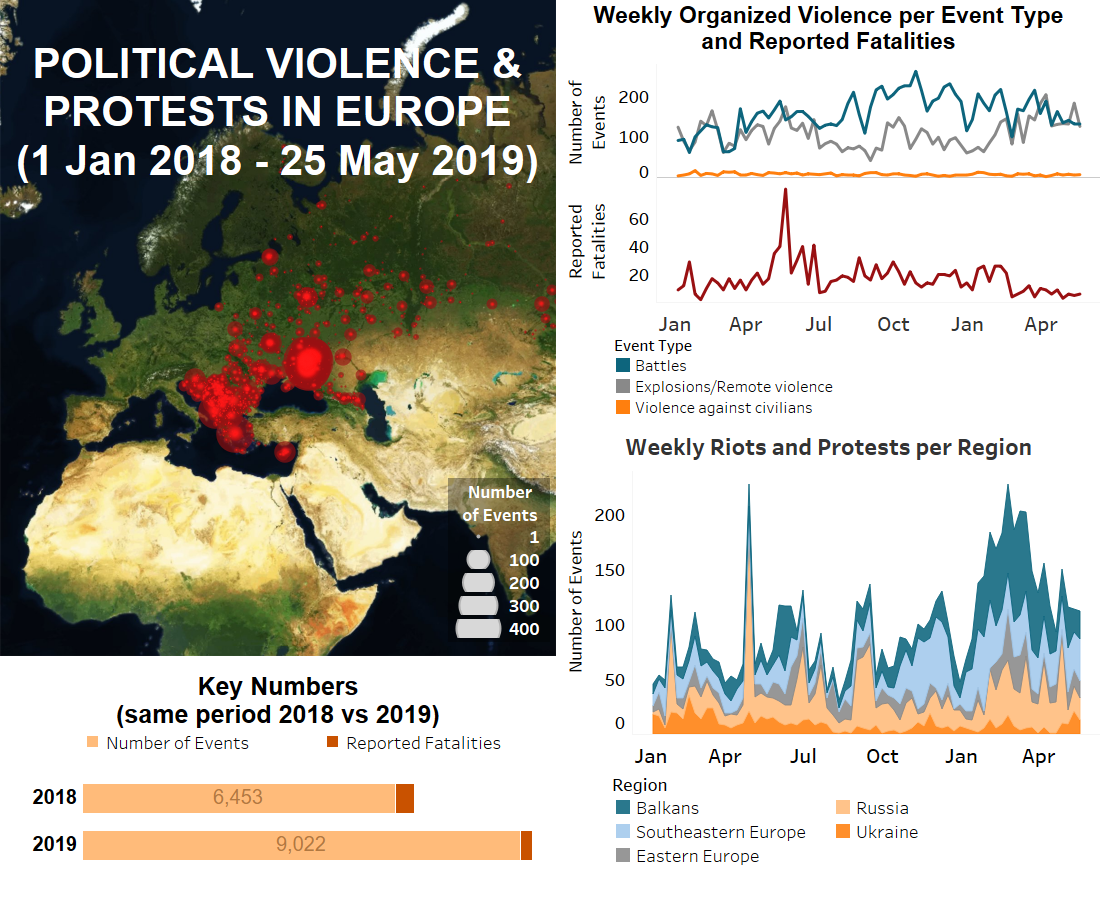