In partnership with the Robert Strauss Center for International Security and Law at The University of Texas at Austin, ACLED is pleased to announce the launch of our new data on political violence targeting women and the accompanying report, Terribly and Terrifyingly Normal’: Political Violence Targeting Women.

Read the executive summary of the report below, and access the full report here.

Women around the world are facing unprecedented levels of targeted political violence. New data on political violence targeting women collated by the Armed Conflict Location & Event Data Project (ACLED) – in partnership with the Robert Strauss Center for International Security and Law at The University of Texas at Austin – confirm that the threat of political violence towards women has grown, in particular over the past 18 months, and is currently at its highest level recorded since 2018.

These data offer a new tool to track politically motivated attacks on women over time and across countries; address a number of critical gaps left by the constellation of efforts over the years to monitor and assess political gender-based violence; and will also complement the range of essential past and ongoing initiatives.

The new data on political violence targeting women are publicly accessible via ACLED’s website — both through the data export tool as well as a curated data file — and also via ACLED’s API on a weekly basis, allowing users to monitor these trends in near-real-time for analysis, programming, early warning, advocacy, and more.

If you are an organization collecting information on political violence targeting women, or demonstrations featuring women, and are interested in a partnership with ACLED to help extend coverage of these threats to women further, please reach out to us at [email protected] 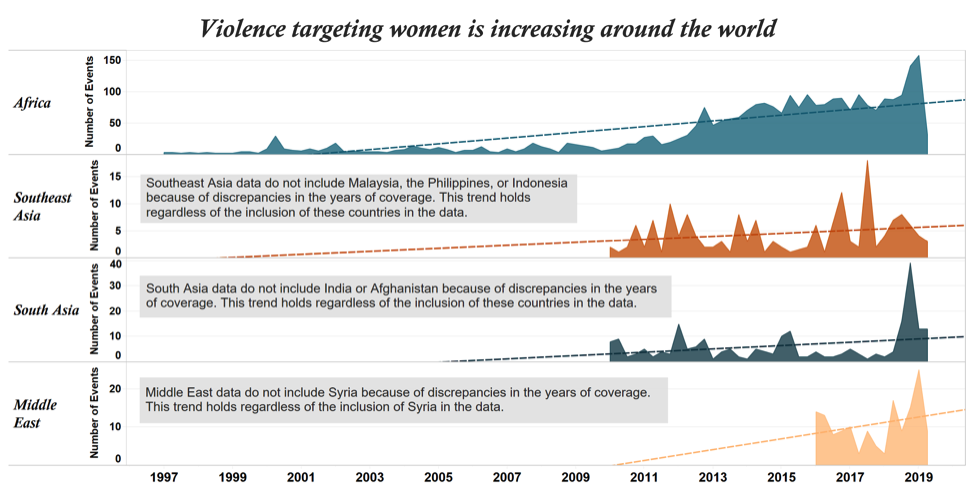