The key trends in the South and Southeast Asian region last week included heavy fighting between Taliban and Afghan security forces in Afghanistan; ongoing fighting between state forces and domestic rebel groups in Pakistan, India, Myanmar, Thailand, and the Philippines; as well as election-related violence and protests in India, Bangladesh, and Indonesia.

In Afghanistan, Taliban and Afghan forces clashed on multiple fronts as Taliban forces attempted to seize control over Daychopan, Obe, and Khawja Ghar districts, particularly after Afghan forces’ successful operation last week to re-capture the latter district from Taliban forces who had controlled the district for two years. One unintended result of these intense clashes is that six Afghan soldiers were killed by a US airstrike in Imam Sahib district. Afghan forces were in the district with US forces and mistakenly clashed with another unit of the Afghan military and requested air support for what they thought was an armed militant group.

For the second week, the Islamic State (IS) carried out a deadly attack in Jalalabad city, Nangarhar, killing 11 civilians and policemen following an attack from last week outside an Afghan military school. A suicide bomber targeted policemen and detonated himself in the sixth police district.

On the other hand, Afghan military special forces freed 47 prisoners from Taliban prisons in Baghlan and Kunduz provinces. The military has conducted a number of operations to free both civilians and Afghan security personnel from Taliban prisons in the past few weeks. At the same time, 30 former Taliban militants were released from Nangarhar’s central prison last week. President Ashraf Ghani had signed a decree on the eve of Eid to release 887 Taliban prisoners.

In Myanmar, fighting between the Myanmar military and the Arakan Army (AA) continued last week with particularly deadly fighting occurring in Buthidaung township in Rakhine state. In the Philippines, four rebels were reportedly killed during fighting between state forces and the New People’s Army (NPA). In Thailand, civilians were the target of suspected separatists in Narathiwat province when two Buddhists were reportedly killed in Ra-ngae district.

In other developments, while post-election violence subsided in most parts of India, inter-party clashes and political killings continue to be reported from West Bengal state. Last week, ten more fatalities were reported owing to the ongoing political rivalry between the Bharatiya Janata Party (BJP) and the Trinamool Congress Party (TMC). An incident of pre-election violence was also reported from Bangladesh, were around 30 people were injured in an armed clash between supporters of an Awami League (AL) candidate and a rebel candidate in Madaripur district. The fifth and final phase of the upazila parishad (sub-district council) elections is being held in 16 upazilas on 18 June. Meanwhile in Indonesia, a demonstration was held in front of the constitutional court in Central Jakarta as the court began hearing Prabowo Subianto’s case challenging President Joko Widodo’s win in the recent general election (Jakarta Globe, 14 June 2019).

Various issues led to demonstrations in the region last week. In Pakistan, arrests of key opposition leaders on multiple cases of corruption and money laundering charges led to nationwide riots and protests. Demonstrations were held on Independence Day in the Philippines with one held in front of the US embassy and another in front of the Chinese embassy. The former protest called for the US not to establish military bases in the Philippines, while the later called for China to curtail its activity in the South China Sea. In Vietnam, demonstrators frustrated with having to pay highway tolls gathered and blocked the Hoa Lac-Hoa Binh highway with their cars and motorcycles in Hoa Binh province. In Myanmar, nationalist Buddhist monks demonstrated over the recent arrest warrant issued for Wirathu, a monk whose sermons have promoted violence. 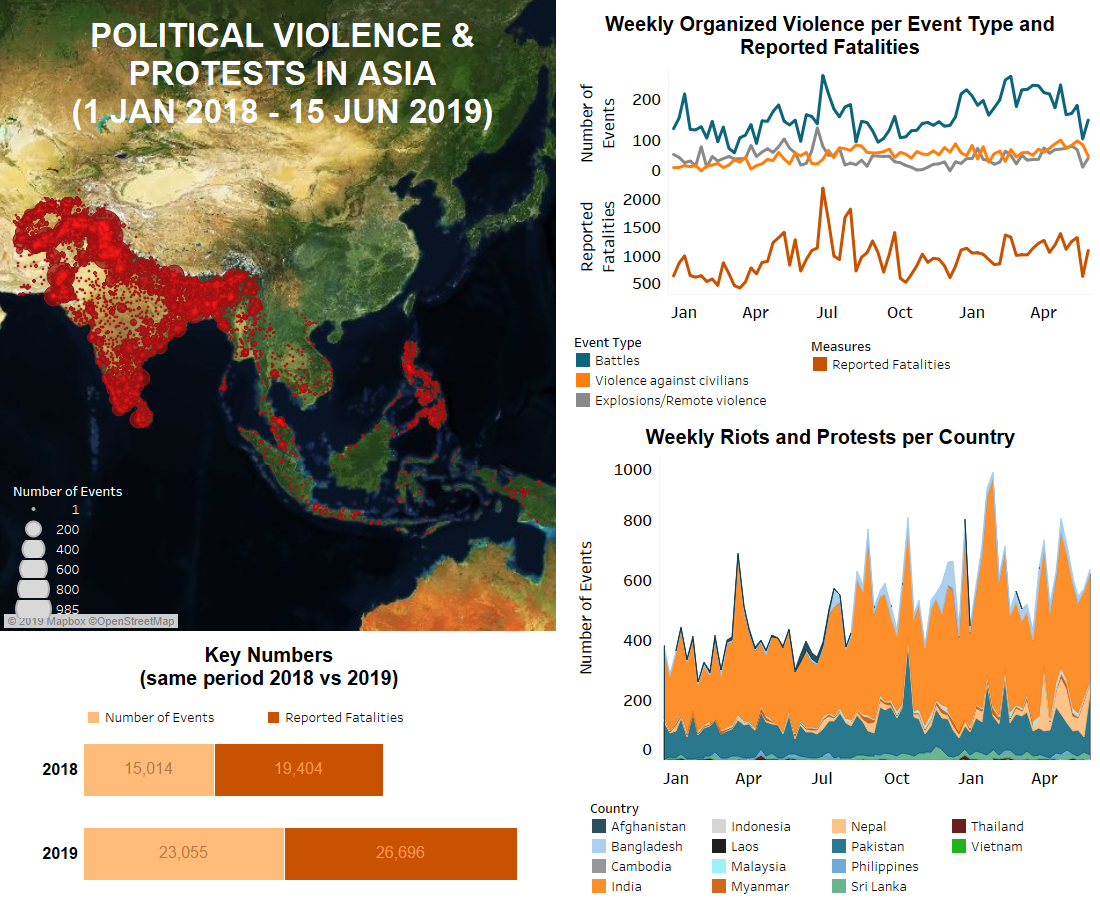