The key trends in the South and Southeast Asian region last week included fighting between Taliban and Afghan security forces in Afghanistan; ongoing fighting between state forces and domestic rebel groups in Pakistan, India, Myanmar, Thailand and the Philippines; as well as demonstrations over water supply issues, land rights, and environmental concerns across the region.

In Afghanistan last week, fighting took place across the country but was once again focused in the southeast as both Afghan security forces and Taliban fighters attempted to gain a foothold in contested territory. Afghan military and NATO air and artillery assaults reportedly led to high Taliban fatalities in the provinces of Zabul and Faryab, although no territory was exchanged. Elsewhere, however, Taliban reported that they captured tens of villages following heavy clashes in two districts of Wardak, as well as more minor gains in Shuhada district of Badakhshan. Both provinces are strategic to the Taliban, with Wardak neighboring Kabul, and Badakhshan bordering both Pakistan and Tajikistan.

In the northeast, meanwhile, there were once again reports of Taliban and Islamic State (IS) fighters clashing in Kunar province. Earlier this year, thousands of civilians were displaced by fighting between the two groups over territory in the mountainous Chapa Dara district (VOA News, 4 April 2019). Last week, hundreds more were displaced by fighting in both Chapa Dara and Dara-I-Pech districts. With IS taking losses in Iraq and Syria as of late, the group’s Afghan chapter appears to be quietly expanding outside of its stronghold of Nangarhar and into defensive mountain regions like Chapa Dara (Al Jazeera, 10 June 2019).

Domestic rebel and separatist groups were also active in other South and Southeast Asian countries. In Pakistan, domestic militant groups continue to be active in Khyber Pakhtunkhwa and Balochistan province. Suspected separatists in Thailand and the New People’s Army (NPA) in the Philippines continued to engage in violence in their respective countries.

In Myanmar, fighting between the Myanmar military and Arakan Army (AA) was particularly deadly around Minbya township in Rakhine state last week. As fighting continues, internet service in northern Rakhine and southern Chin states was shut down, causing many to question whether this is a prelude to increased human rights violations in the area (Reuters, 24 June 2019). Also, notably, last week, the Myanmar military and Palaung State Liberation Front/Ta’ang National Liberation Army (PSLF/TNLA) clashed twice in Kutkai township in Shan state; the clashes come as the unilateral ceasefire declared by the military covering Kachin and Shan states is set to end this month. As well, for the first time this year, the military’s Border Guard Force clashed with a splinter DKBA group in Kayin state.

Activists came under attack in the region last week in Vietnam, the Philippines, and Pakistan. This is of note in Vietnam: a country where such events rarely make international headlines. In the Philippines, specifically, there has been a growing trend of “red-tagging” in the country; reports note that Philippine authorities have been “red-tagging” legitimate organizations, branding them as “communist fronts,” resulting in their members being targeted (Amnesty International, 24 June 2019). This is reflective of the branding of opposition members as “drug suspects” by Philippine authorities, which has also resulted in the targeting and deaths of those individuals (Al Jazeera, 25 June 2019).

Elections remained a theme in India, Bangladesh, and Indonesia. In India, while political violence subsided in most parts of the countries following the general elections, clashes and targeted attacks resulting from political rivalries continued to be reported from West Bengal and Tripura. Last week, upazila parishad (sub-district council) elections were held in 16 upazilas in Bangladesh. Even though elections have previously led to widespread violence in the country, only sporadic incidents of election violence were reported during this latest round of elections. While demonstrations against the results of the recent general election in Indonesia have decreased, last week a rally was held near the constitutional court in Central Jakarta in support of Prabowo Subianto’s challenge of the presidential election result. A ruling on the dispute is expected on 27 June with security forces on standby in the event that demonstrations by those dissatisfied with the results should occur as they did with the deadly riots in May (The Jakarta Post, 24 June 2019).

In other developments, land and labour issues led to demonstrations in India, Sri Lanka, Pakistan, Nepal, Myanmar, Malaysia, and Cambodia last week, a trend often seen across the Asia region. Demonstrations were also reported over water supply issues. Such demonstrations tend to be seen each year in South Asia, especially as summer draws near and temperatures increase. Water supply and management issues led to a rising number of demonstrations, as well as to several incidents of communal violence in rural and urban areas, in India, Pakistan, Nepal, and Sri Lanka. Meanwhile, in Thailand, as the country prepared to host the ASEAN Summit, protesters in Bangkok demonstrated against other countries sending their waste to Southeast Asia, a growing issue in the region (The New York Times, 7 June 2019).

In other news, in Sri Lanka, the President extended the country’s state of emergency status by another month, following the Easter Day bombings on hotels and churches that killed more than 250 people (India Today, 23 June 2019). The emergency law allows the detention and interrogation of suspects without court orders, providing Sri Lankan police and military with sweeping powers which have led to a number of arrests across the country. 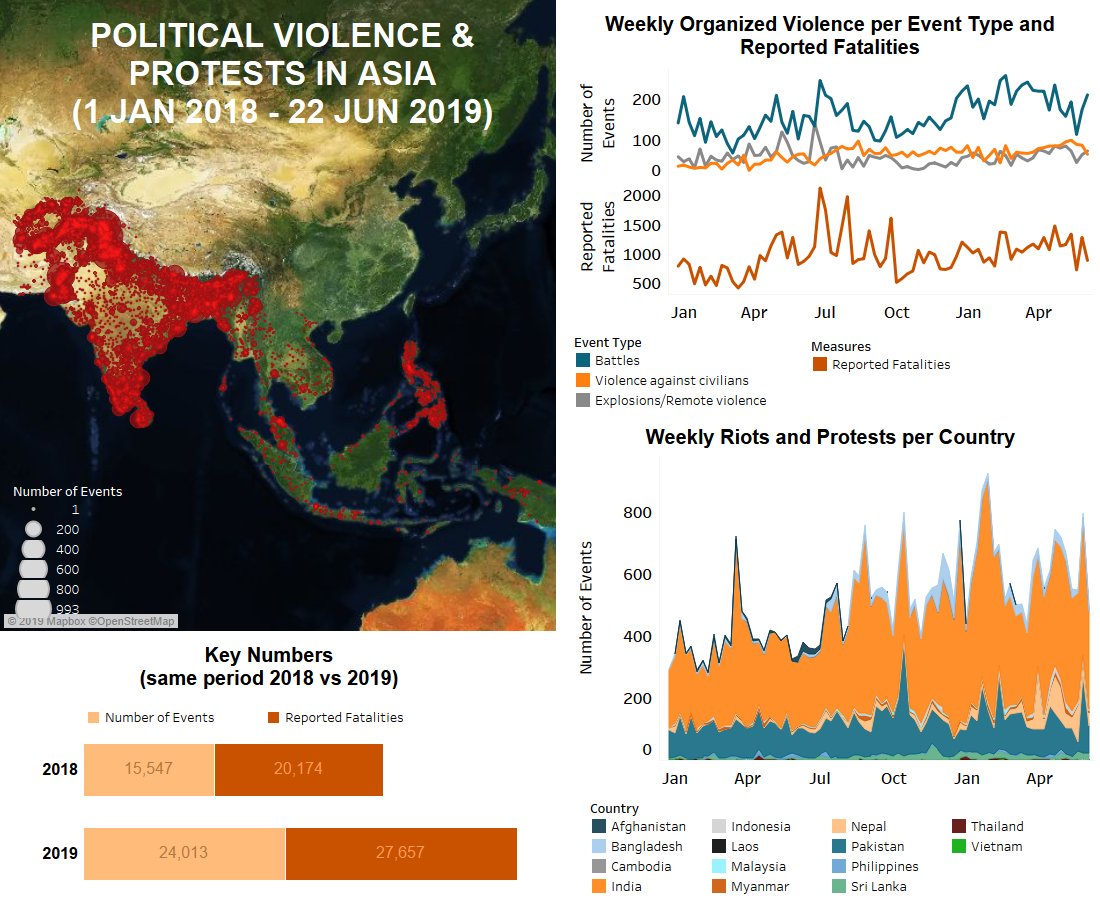 Daniela Pollmann is ACLED's Program Coordinator. Ms Pollmann holds a MA in Conflict, Security and Development from the University of Sussex with focus on peace processes. She has previous work experience in the social sector in Uganda and India where her work focused on women empowerment, child protection and anti-human trafficking. She is currently stationed in New Delhi, India.
Tom Hart

Tom Hart is the Global Research Coordinator with ACLED, and a part-time brewer and genealogist. He received his BA in International History from Carleton University in Ottawa, where he focused on colonial relationships, intercultural interaction, and geocultural perspectives. Tom is currently based out of Ottawa, Canada, and is fluent in English and French.
26 June 2019
Share
TweetShare on Twitter Share on FacebookShare on Facebook Share on LinkedInShare on LinkedIn