There were a few major developments last week in the Middle East region involving the United States. Major events included the downing of a US drone by Iran’s Islamic Revolutionary Guard Corps (IRGC) and the release of the economic section of the ‘Deal of the Century’, as well as the Trump administration’s anticipated Middle East peace plan. Another important development was the mayoral election in Istanbul, Turkey. Meanwhile, there were several updates in ongoing armed conflicts in Turkey, Iraq, Syria, and Yemen.

Amid worsening relations between the United States and Iran, on 20 June, the IRGC shot down an American surveillance drone over the Strait of Hormuz marking a major escalation in tensions between the two countries. The IRGC said that the drone had violated Iranian airspace, but the US military insisted that the drone was operating over international waters and that the attack was “unprovoked” (BBC, 20 June 2019). This is the first direct confrontation between the US military and IRGC since the US withdrew from the 2015 nuclear agreement with Iran last year (Al Jazeera, 25 June 2019). President Trump had reportedly ordered retaliatory airstrikes on three different sites in Iran but called off the operation minutes before they were set to occur (Guardian, 21 June 2019). However, the US launched a cyber-attack on Iranian weapons systems, disabling computer systems controlling rocket and missile launchers (BBC, 23 June 2019). This close brush with war does not appear to have de-escalated the situation as both sides have continued to threaten each other since.

On 22 June, the US released the economic part of the much-awaited US peace plan for Palestine, dubbed ‘The Deal of the Century’. The plan states that it is aimed at economically empowering Palestinians in the West Bank and Gaza, notably through $50 billion in investment (Haaretz, 22 June 2019). The second part of the plan, which will be related to the political situation, is expected to be released in November (BBC, 25 June 2019). However, the plan has already received criticism for failing to address the reasons for economic disenfranchisement of Palestinians in the Occupied Territories (HRW, 24 June 2019). In fact, it excludes any mention of the Israeli occupation or Palestinian statehood. The release of the first part of the plan precedes the workshop in Manama, Bahrain’s capital, where US representatives will discuss the plan with representatives from several Gulf countries, Egypt, and Jordan. Palestinian officials are boycotting the event, as are representatives from Lebanon and Iraq in solidarity (BBC, 25 June 2019). Large protests against the American plan and in solidarity with Palestinians took place in Bahrain, Jordan, and Lebanon last week. With the Manama workshop set to occur on 25 June and 26 June, protests across the Middle East are likely to increase over the next week.

Meanwhile, in Turkey, there were several reports of attacks against opposition party members in the lead up to the second round of elections for the Mayor of Istanbul, which occurred on 23 June. In one of the reported attacks, supporters from the ruling party, the Justice and Development Party (AKP), attacked members of the Republican Peoples’ Party (CHP) at an election meeting. Back in March, opposition candidate Ekrem İmamoğlu from the CHP won the Istanbul mayoral election, unseating former Prime Minister Binali Yıldırım – a close ally of President Erdoğan. However, his victory was short lived as the AKP quickly called for a recount prompting a new election. However, on 23 June, Istanbul definitively elected İmamoğlu by a much higher margin than in the first election (Vox, 25 June 2019). This signals a significant shift in Turkish politics considering that an AKP member has been mayor of Istanbul since 2004.

In Yemen, nearly all of the reported 30 frontlines were active throughout last week with mid-level clashes reported between Houthi forces and forces loyal to the internationally-recognized government. Clashes between anti-Houthi forces and pro-Houthi forces in Taiz city and its surroundings were reported to be the most intense, marking a continuation of the escalation of clashes between the two sides which started around a month ago.

Houthi forces intensified their cross-border attacks into Saudi Arabia‘s Jizan region, including attacks on military sites. Further Houthi intrusions into Saudi Arabian territory included reportedly failed drone attacks on Abha city airport and border clashes along Asir and Najran regions’ southern borders. While clashes continue consistently, the increased frequency of drone attacks on airports and pipelines in Saudi Arabia since 21 May 2019 has been a new element of the conflict.

Al-Qaeda in the Arabian Peninsula (AQAP) activity increased a bit last week, with operations occurring against both Islamic State (IS) forces and United Arab Emirate (UAE)-backed forces. This marks a continuation of tit-for-tat attacks against the Islamic State and recurring confrontations with the UAE-backed forces or the Houthis. Meanwhile, rivalries between Yemeni troops loyal to the vice president and UAE-backed forces came to a head this week with short clashes fought in Ataq town in Shabwah. This is a precarious sign of potential future conflicts between UAE-backed troops and troops loyal to the internationally-recognized government in Shabwah, Hadramawt and potentially even Mahra governorate. Violent incidents in these three governorates have been very rare since 2016.

UAE-backed forces also clashed with local coast guards and security forces on Socotra island after a short dispute arose over equipment. This marks the first time since the beginning of the war that an incident of political violence has been reported on the island.

In Syria, the main development of last week involved Turkish observation posts on the Idleb border. On 16 June, regime forces attacked the seventh Turkish observation point in the demilitarized zone (DMZ) since 4 May. This instance, however, instigated the first retaliatory attack by Turkish forces, who shelled several regime-held locations in the area. The following day, neither regime nor Russian airstrikes on northwest Syria were recorded, which may be attributed to the response of the Turkish military. These Turkish observation posts were established by an agreement between Turkey, Iran, and Russia (Telegraph, 17 September 2019). The response of the Turkish military indicates that are respecting a prior agreement with Russia and will not allow further regime advances beyond these posts in the DMZ.

Regime forces and their Russian allies continued their assault on rebel forces in the Greater Idleb region – mainly Hama governorate. Despite intensive clashes and airstrikes throughout the week, no notable territorial changes occurred.

In eastern Syria, 11 attacks took place last week against Kurdish armed groups in spite of the joint effort between Coalition forces and Syrian Democratic Forces (QSD) to control the security situation. Coalition forces conducted raids against IS sleeper cells. Despite these efforts, it appears IS still has the capacity to continue to launch attacks. Furthermore, in addition to the existing fires that continue to devour large swathes of agricultural land across eastern Syria, new arson incidents were recorded in 11 new locations, mainly in al Hasakeh governorate. These fires have reportedly killed ten people and destroyed 70% of agricultural land in the area (Egypt Today, 16 June 2019). 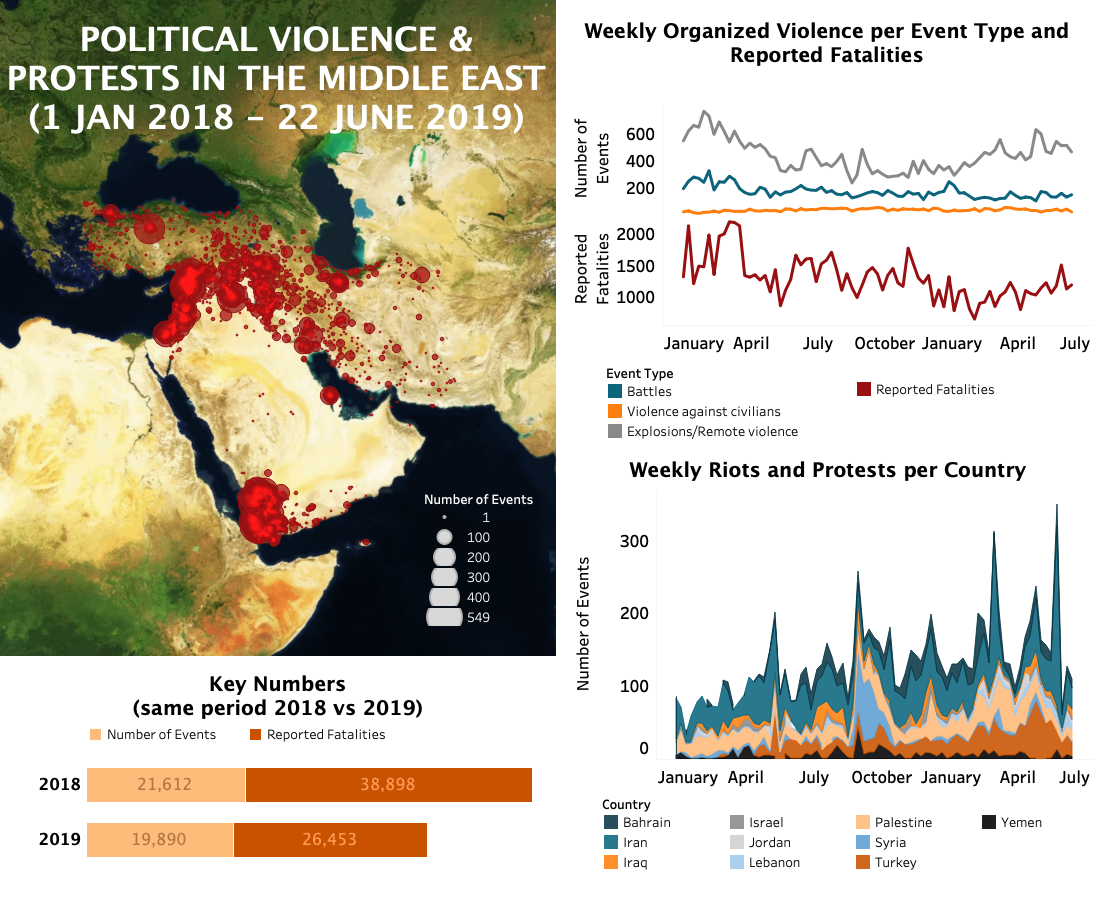