Last week, Israeli attacks in Syria were one of the most significant developments in the Middle East, as well as the intensifying clashes between Kurdistan Workers’ Party (PKK) and Turkish military both in southeastern Turkey and in northern Iraq. Clashes between Kurdish rebels and Iranian forces also increased in northwestern Iran. An alleged assassination attempt against a Lebanese minister also made headlines in Lebanon. Conflicts continued in Yemen and Syria with slight decreases in clashes in certain areas. Operations in Iraq against the Islamic State (IS) also continued last week.

Furthermore, clashes continued in the Greater Idleb area as regime and rebel forces continue to battle for control of the area. Fewer clashes occurred last week compared to weeks prior, and no territorial gains or losses were reported. The Syrian and Russian onslaught on northwest Syria continued, recording an over 20% surge in aerial and ground attacks. Of these attacks, 56 events (over 17%) targeted civilians and civilian infrastructure resulting in nearly 60 reported civilian fatalities as well as substantial damage to three health facilities in Idleb province.

Coalition forces carried out airstrikes against Al Qaeda affiliates in Syria and IS in Iraq. On 30 June, Coalition forces carried out airstrikes against an al Qaeda-affiliate Hurras al Deen gathering near Aleppo city, killing at least 9 members, including several foreign commanders. This marks the first Coalition strike against proscribed groups in northwest Syria in nearly two years; the last of these targeted a Hayat Tahrir al-Sham (HTS) gathering near Aleppo in August 2017. In Iraq, battles targeting IS continued in Iraq’s Anbar, Diyala, and Ninewa governorates, with both Coalition airstrikes and ground attacks led by the Popular Mobilization Forces (PMF) of the Iraqi Military. These operations reportedly inflicted casualties on both parties, though especially on IS forces.

Meanwhile, in Yemen, there was also a slight decrease in the number of clashes between anti-Houthi forces and Houthi soldiers across most areas of the country, although the fighting continued in Qaatabah district of Ad Dali governorate. Airstrikes continued in most Houthi-controlled areas throughout the week, inflicting reported fatalities on Houthi soldiers.

Clashes in Al Bayda continued to decrease rapidly, with only a few gunfights reported between anti-Houthi forces and pro-Hadi troops in Nati district. Despite high levels of violence across the governorate over the last month, the frontlines have now stalled as the warring parties concentrate their efforts around the strategic Ad Dali frontline.

On the other hand, Hodeidah governorate continued to see sustained levels of shelling and clashes between anti-Houthi forces and Houthi troops, despite the declared ceasefire. At the same time, new clashes erupted just south of Marib city, with Al Amir, Al Ashraf, and Ubaydah tribes reportedly battling Islah-affiliated security units. The deputy director of security in Marib was killed during the confrontations on 3 July, along with a number of tribesmen.

Meanwhile, unrest continued to simmer in Aden and the south of the county overall, with dissatisfied oil workers demonstrating against corruption within the Yemen Petroleum Company and rival armed groups fighting minor clashes across several neighborhoods in the city.

In Turkey, the clashes between Turkish forces and PKK continued in the southeast of the country, most intensively in Hakkari province bordering Iraq. On the other side of the border, Operation Claw, the operation launched by the Turkish military in May to target the PKK, continued in northern Iraq’s Amadiya, Hakurk, and Qandil regions. PKK sources claimed that Turkish airstrikes caused damage to civilian lands and Turkish shelling reportedly targeted a village in Pishdar district of Sulaymaniyah province, an unusual location for Operation Claw. Both in Turkey and Iraq, these battles resulted in reported casualties from both sides.

Another development was the vehicle-borne explosion in Hatay province’s Reyhanli town, which borders Syria. While the details of the attack have yet to be released by Turkish authorities, President Erdogan stated that the attack was “terror-related” and intended to target a nearby mosque (Al Jazeera, 5 July 2019).

In Iran, deadly clashes were reported between Kurdish rebel groups and the IRGC in West Azerbaijan province. The Kurdistan Free Life Party (PJAK), a PKK affiliate in Iran, was active in some of these battles in the northwestern Chaldoran county. These clashes have taken place periodically since the end of May but so far have only amounted to two reported fatalities. Last week alone, at least five fatalities were reported marking an escalation in the lethality of these clashes.

In Lebanon, the convoy of the Minister of State for Refugee Affairs, Saleh al-Gharib, came under fire in Aley district near Beirut. Two of the minister’s bodyguards were killed in the ensuing fight. According to the minister, it was an assassination attempt, due to the support of his party, the Free Patriotic Movement (FPM), for the Syrian government and a pro-Syrian Druze leader Talal Arslan. The Aley district is known to support Walid Jumblatt, anti-Damascus leader of Progressive Socialist Party (PSP), the rival of FPM. Although PSP denied any involvement, after the incident, the Lebanese army sent reinforcements to the area (Al Jazeera, 30 July 2019). This event is indicative of the deep and potentially violent divide within the Druze community in Lebanon over the war in Syria. 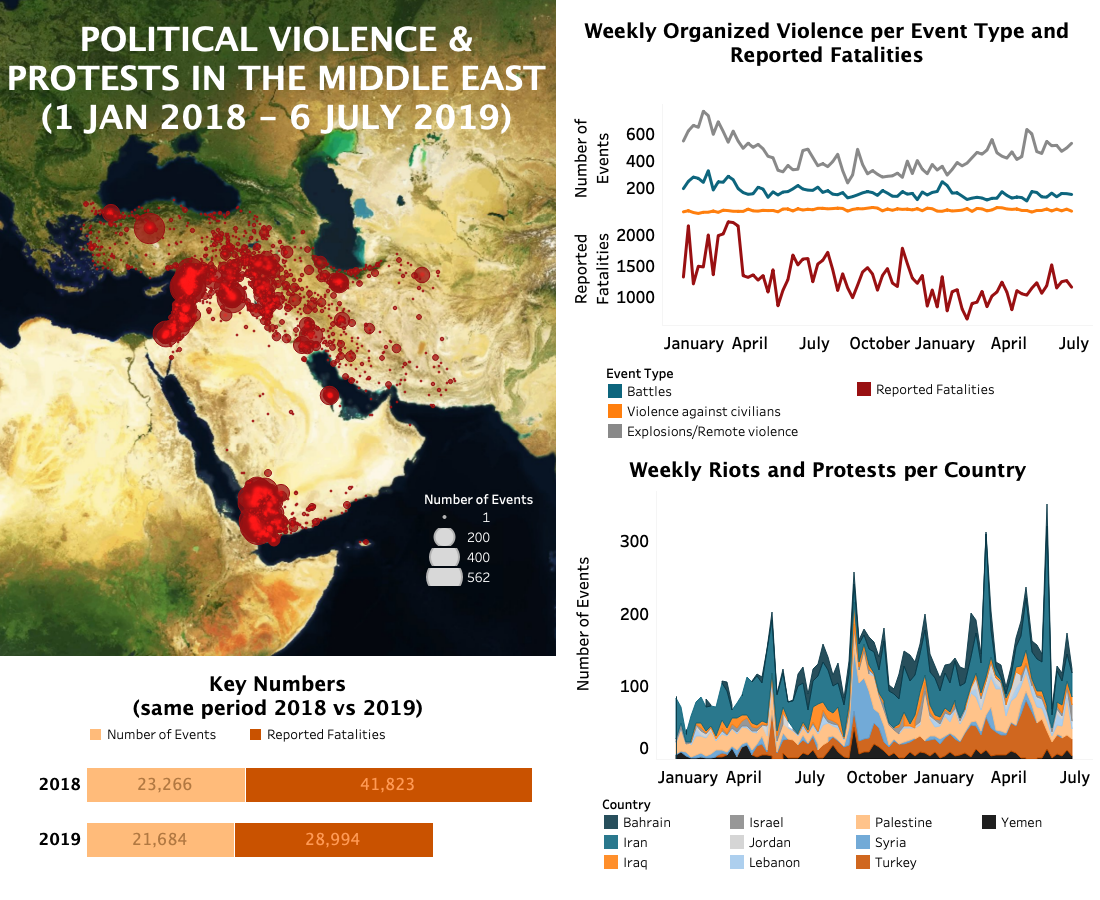