Last week in the Middle East there were a number of developments with on-going conflicts in Syria, Yemen, and Iraq. Tensions between Iran and the US continue to be a focal point of concern over the potential for armed escalation in the region.

In Syria, clashes continued at a lower rate between rebels and Islamist faction fighters against regime and allied forces in northwestern Syria, with neither side gaining any territory in the Greater Idleb area. The Syrian regime and Russian forces, however, continued their aerial and ground bombardments at the same pace as seen in recent weeks. In a sign that the campaign is likely to continue, both regime and Turkish reinforcements were brought to locations near the battle lines in Hama and Idleb provinces.

Elsewhere, IED and assassination attacks against regime forces in Dara’a province continued unabated while the same type of attacks was carried out against Syrian Democratic Forces (QSD) in Al-Hasakeh province. Meanwhile, a regime-controlled gas line was attacked by suspected Islamic State (IS) fighters in eastern Deir-ez-Zor province. Several National Defense Forces (QDW) loyalist militia fighters defected to a pro-Iranian militia in the city of Al-Mayadin, which could portend trouble for the regime in maintaining the loyalty of its paramilitaries.

Meanwhile, in Yemen, five Security Belt fighters were killed in a coordinated RPG attack by Al-Qaeda in the Arabian Peninsula (AQAP) in Abyan governorate, marking the deadliest attack by the group on UAE-trained forces since last month. AQAP was also active in Al Bayda during the week, clashing with IS forces in Dhi Kaleb al Asfal. Clashes between the two jihadi groups have significantly declined recently, despite weeks of intense fighting in Al Bayda governorate earlier in the year.

Intra-Houthi clashes erupted in Raydah district of Amran governorate after Houthi forces from the Harf Sufyan tribe attempted to arrest a pro-Houthi local tribal leader from the Ghawla tribe accused of killing a Houthi-affiliated official. Two days of fighting resulted in a number of fatalities, with tensions ongoing in the area. Intra-Houthi clashes, which often are caused by tribal contestations, occur rarely but have been on the rise in the last two months, with several clashes being reported in Amran and Ibb governorates.

Clashes between Houthi forces and anti-Houthi forces loyal to the internationally-recognized government continued to rage across all of the major battlefronts in the country, with the most intense clashes taking place in Qaatabah district of Ad Dali, the northern areas near the Saudi border, and the districts surrounding the port city of Hudaydah. There were a continuing number of clashes in Al Bayda, Taizz, and Jawf governorates, in line with current trends for this year. Very little territorial change occurred during last week, with some reports indicating that both sides are amassing troops for further clashes in Nihm district, located in a strategic area for access to the capital city of Sana’a.

Saudi-led coalition warplanes conducted strikes against Houthi military targets in and around Sana’a last week, with many additional strikes backing anti-Houthi forces across the country. Despite many airstrikes throughout the week, the number of overall strikes conducted by the coalition seems to have declined. At least one civilian death was reported to be attributed to coalition airstrikes.

In Iraq, Operation Claw — led by the Turkish military against the Kurdish Workers’ Party (PKK) — and Operation Will of Victory — led by the Iraqi military against IS — both continued last week in Iraq. At least three Turkish diplomatic employees were reportedly killed by a gunman in Iraqi Kurdistan’s capital, Erbil, leading to intensified airstrikes by Turkish forces in northern Iraq.

Furthermore, an unidentified airstrike against a military base of the Popular Mobilization Forces (PMF) in Sala al-Din province has been the origin of controversy. Initial reports stated that the strike was likely carried out by a drone; however, the PMF ruled out this possibility due to the extent of damage caused. As IS does not have the weaponry to perform an attack of such magnitude, the PMF have speculated that either the US or Israel is likely responsible for the attack (Asharq al-Awsat, 21 July 2019). This claim has been refuted by the US. The attack has raised concerns about the possibility that US-Iran tensions may have the potential to play out on Iraqi soil.

Over the last week, US-Iran tensions continued to impact the Persian Gulf. On 18 July, US officials claimed that they downed an Iranian drone over the Strait of Hormuz as it allegedly approached the USS Boxer. However, Iranian officials have rejected the US claims and even suggested that the US may have targeted its own drone by mistake (BBC, 19 July 2019). Additionally, the Islamic Revolutionary Guard Corps (IRGC) seized the British-flagged Stena Impero oil tanker with 23 international crew members, while it was transiting through the Strait of Hormuz. Iran reported that the ship had collided with an Iranian fishing vessel, turned off its transponder and failed to respond to distress calls, thereby breaking international maritime rules (Times of Israel, 20 July 2019). The move is considered to be a response to the seizure of an Iranian oil tanker in Gibraltar on 4 July, which British officials claimed violated European Union sanctions by carrying oil to Syria (The Guardian, 19 July 2019). 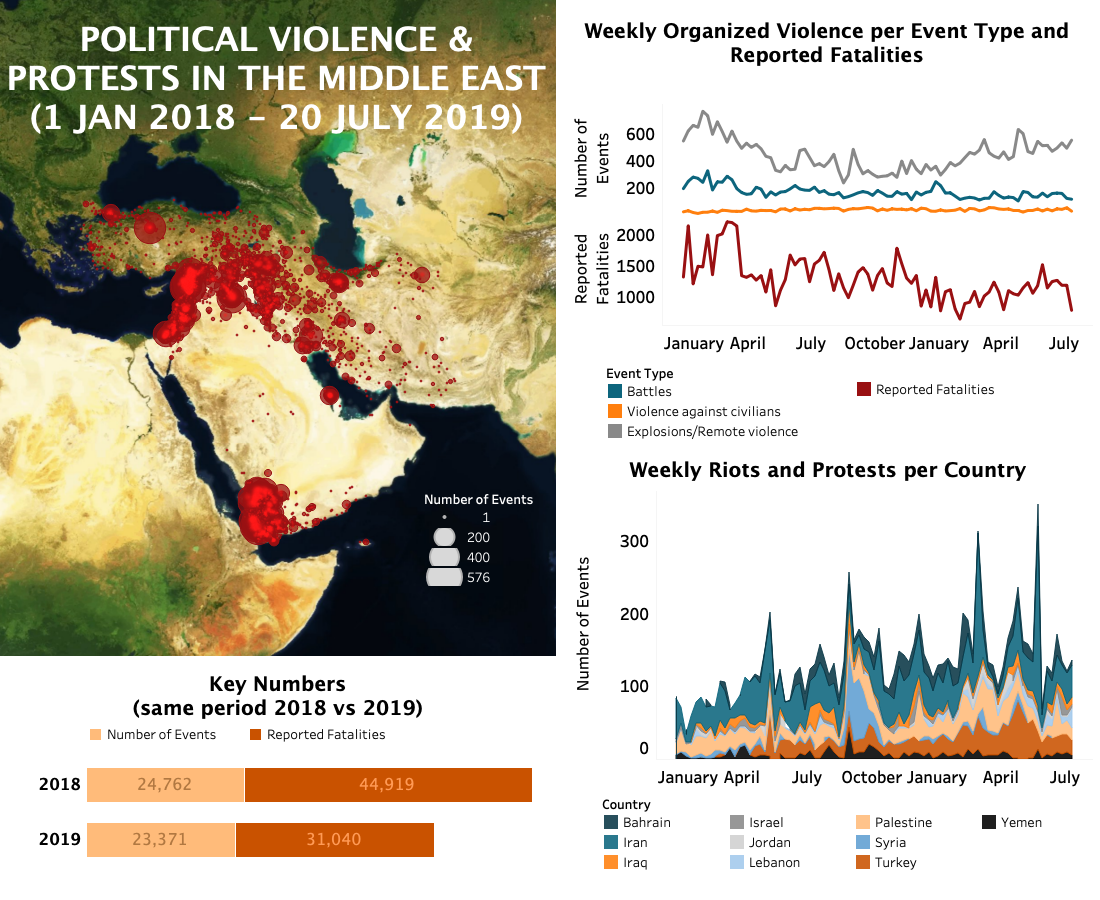