Last week, a leading member of Rouvikonas — Greece’s major anarchist group, responsible for dozens of violent incidents in Athens — was detained. In Russia, protests over the exclusion of opposition candidates from the Moscow city council elections culminated in one of the largest crackdowns in recent years. In Ukraine, the new ceasefire agreement significantly decreased the number of ceasefire violations in the Donbass region.

In Greece, police detained Giorgos Kalaitzidis, a leading member of the infamous Greek anarchist group Rouvikonas (Ekathimerini, 22 July 2019). This came after Greece’s new centre-right government pledged to crack down on anti-establishment groups. Rouvikonas carried out dozens of demonstrations and attacks during 2018 and the first half of 2019 targeting public and private properties in Athens, which are likely to continue.

In Russia, protests over Moscow authorities’ refusal to register independent opposition candidates for the upcoming Moscow city council elections continued, culminating in one of the largest violent crackdowns in recent years with more than 1,000 detentions on 27 July (BBC, 27 July 2019). Alexey Navalny and several other opposition figures were arrested in the run-up to the protest (Moscow Times, 25 July 2019). This represents a powerful message from the government on the right to peaceful assembly and puts into question the fairness of the upcoming local elections in Russia.

In Ukraine, the parliamentary elections were held on 21 July with Servant of the People — the party of the recently-elected President Volodymyr Zelensky — receiving an overall majority in the parliament as a result (Ukrayinska Pravda, 26 July 2019). Despite some increase in the number of protest events and violence directed against civilians and the property of political parties in the weeks before the elections, no major violent or demonstration events were reported on election day or during the days following. Due to the ceasefire agreement in the Donbass region, the number of ceasefire violations by both Ukrainian government forces and separatist rebels decreased by almost three times compared to weeks prior, with 36 armed clashes and 61 shelling incidents reported, resulting in one reported fatality. 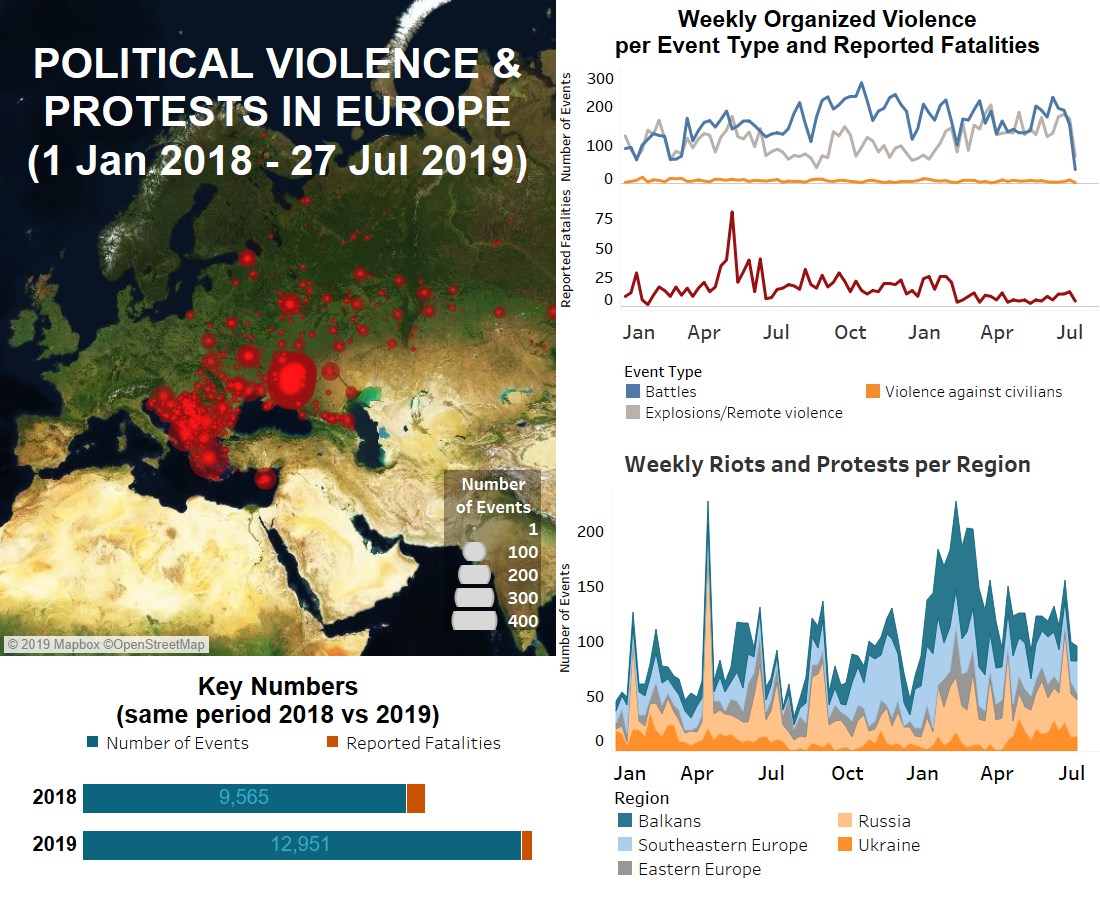