In South and Southeast Asia, the past month has been marked by: intensifying tensions in Jammu and Kashmir (J&K) following the Indian central government’s decision to end J&K’s special status; escalated battles in Shan state in Myanmar; a rise in armed clashes and violence against civilians in Afghanistan; and lastly, protests and riots in Indonesia concerning Papuan independence.

In Afghanistan, the fighting between the state forces and the Taliban continued at an increased pace in recent weeks. The beginning of the month was marked by a deadly suicide attack conducted by the Taliban outside of a police station in the capital, Kabul, that resulted in at least 14 fatalities, including 10 civilians. The group also targeted US troops, especially near Bagram Air Base in Parwan province. A total of three US soldiers were killed in the past month in such Taliban attacks.

The last two weeks of the month were also emphasized by organized violence in the east and the north of the country. Taliban attacks intensified in Kabul, Ghazni, Balkh, Helmand, and Kandahar provinces along with territorial gain claims in Qala i Naw district of Badghis. Meanwhile, the Taliban siege in the city of Kunduz was one of the highlights of the past week. The Taliban has attempted to overrun Kunduz twice in recent years. While it remains unclear if the Taliban has control of the city, Afghan air strikes are still reportedly ongoing in the region (Al Jazeera, 31 August 2019).

Apart from the Taliban, on 17 August, the Islamic State (IS) conducted its deadliest attack this year, targeting civilians in Kabul. A suicide bomber detonated explosives during a wedding party of the minority Shia Hazara community, resulting in 80 reported civilian fatalities.

Almost all of these attacks occurred during the peace talks between the United States and Taliban officials in Qatar during the month of August. These talks were with the goal of reaching a peace deal, foreseeing the withdrawal of US troops and security guarantees from the Taliban. While the details of the deal are becoming clear by this week, the ongoing Taliban attacks since the beginning of the week prove that the negotiations are unlikely to end the daily violence and civilian casualty toll in Afghanistan (BBC, 3 September 2019).

In Pakistan, violence perpetrated by domestic armed groups targeting security personnel and civilians in Khyber Pakhtunkhwa and Balochistan provinces continued throughout the month of August. Members of the minority Hazara community continue to be the target of remote explosions in Balochistan’s capital Quetta. In 2019, the Hazara community has been the target of frequent attacks, most notably in April when a suicide bomber attacked Quetta’s Hazarganji market (Dawn, 12 April 2019).

In India, on 5 August, the central government issued a presidential order effectively abrogating articles 370 and 35 A of the Indian Constitution, which provide autonomy for the state of Jammu and Kashmir (J&K). On the following day, parliament passed a bill bifurcating J&K into two separate union territories: J&K and Ladakh (encompassing the districts of Leh and Kargil). Anticipating violent opposition, the central government implemented severe restrictions on communication services and movement in J&K and substantially increased paramilitary deployment. In addition, hundreds of political leaders and activists, including three former chief ministers, have been placed under house arrest (Al Jazeera, 17 August 2019). Despite the lack of reporting on the ground situation in J&K, incidents of violent rioting have been reported from the Kashmir valley, reportedly leaving four people dead. Opposition against the Indian central government’s decision to end J&K’s special status also led to sporadic demonstrations in other parts of India.

The row over J&K’s special status also affected India-Pakistan relations. Nationwide anti-India demonstrations and Kashmir solidarity rallies were held in Pakistan throughout the month. Cross-border violence across the Line of Control (LoC) between Pakistani and Indian security forces also escalated, resulting in the reported deaths of 17 people.

In the month of August, battle events in Myanmar increased as the military and Arakan Army engaged in several deadly clashes across northern Rakhine state. In mid-August, three members of the Northern Alliance, going by the name of the Brotherhood Alliance, attacked the Defense Services Technological Academy in the Mandalay region (The Irrawaddy, 16 August 2019). Comprised of the Palaung State Liberation Front/Ta’ang National Liberation Army (PSLF/TNLA), Myanmar National Democratic Alliance Army (MNDAA), and Arakan Army (AA), the Brotherhood Alliance’s attacks set off an intense period of fighting in Shan state. Many civilians have been caught in the crossfire of the conflict. While the Northern Alliance met with the government’s peace team in Kengtung on 31 August, no formal agreement was reached, though the military did extend the unilateral ceasefire it has declared since December of last year until 21 September of this year (The Irrawaddy, 2 September 2019).

In Indonesia, after several Papuan students were detained and insulted during a protest in East Java calling for Papuan independence, similar protests and riots were reported across the Papua and West Papua provinces in the last two weeks of August (National Public Radio, 28 August 2019). The demonstrations occurred as Indonesia marked its independence day on 17 August. August is also the anniversary of both the New York Agreement and the “Act of Free Choice” in which control of the two Papuan provinces was given to Indonesia in the 1960s. A government-ordered internet blackout in the region beginning on 21 August has hindered the flow of information from the provinces as the disorder continues; demonstrations and public statements in support of separatist aims have also been banned (Channel News Asia, 2 September 2019).

In Thailand, more explosions/remote violence and violence against civilian events involving separatists were recorded than battles last month. Also, notably, a series of bombs went off across Bangkok in early August. Various actors have been floated as possible perpetrators of this violence (Asia Times, 5 August 2019). The authorities have recently arrested the alleged bombmaker while noting the suspects in the bombing came from the southern provinces of Thailand (Reuters, 3 September 2019); however, no definitive motive for the bombings has been given.

In the month of August, there were at least 84 alleged drug suspects killed in the Philippines either in police raids or by anti-drug vigilantes. Meanwhile, the military clashed with the New People’s Army (NPA) a number of times during the month, leading to 20 reported fatalities. The clashes come as President Duterte has stated his intention to crackdown on NPA rebels in the coming months (Rappler, 27 August 2019).

In Vietnam, three protest events were recorded in August against China’s actions in the South China Sea. The protests come amid rising tensions between the two countries in the region (CNN, 30 August 2019).

Finally, after a month of rising tensions between Cambodia and Laos over a disputed border crossing, both Cambodian and Lao troops agreed to withdraw from the area (The Diplomat, 28 August 2019). 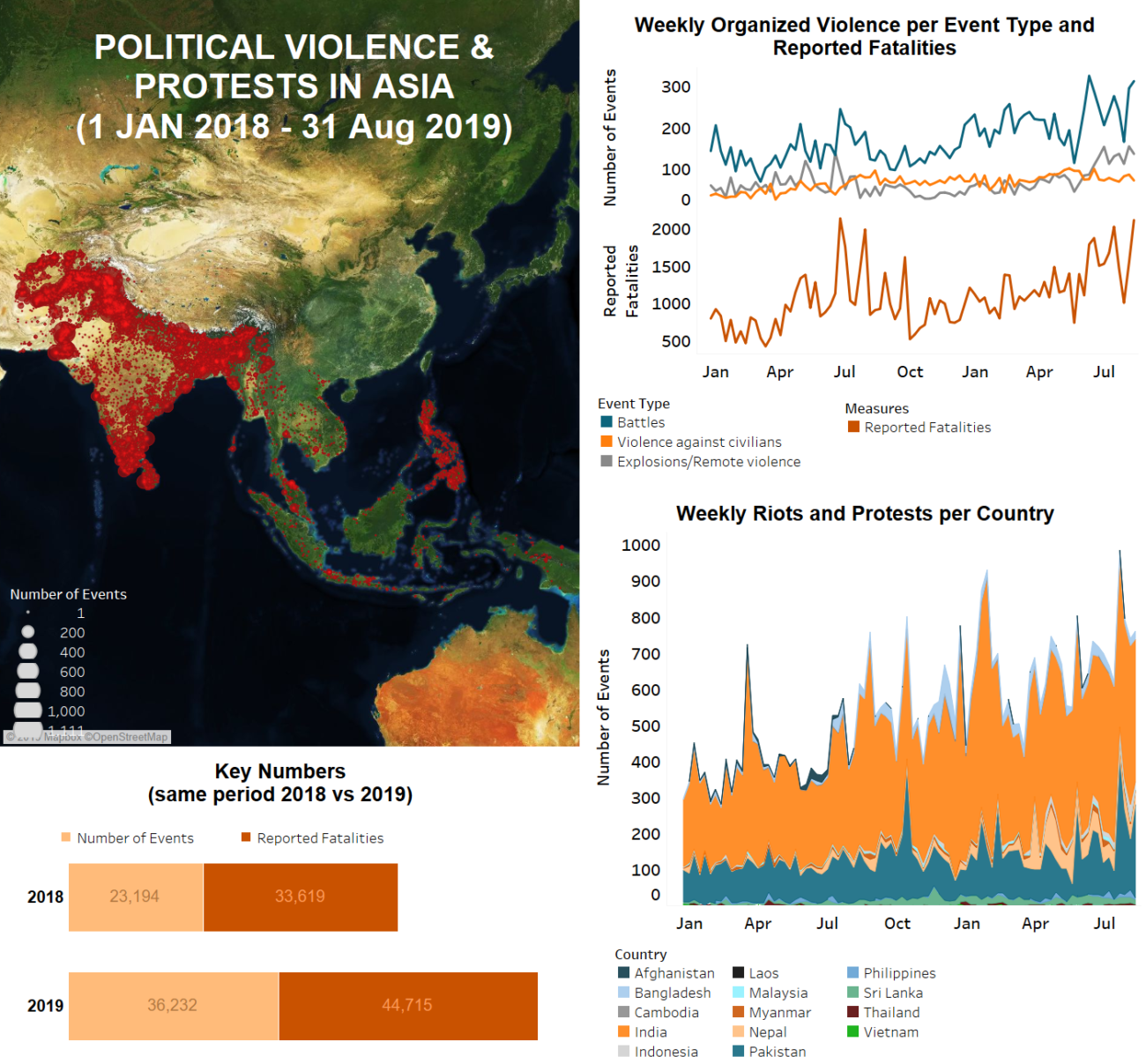 Daniela Pollmann is ACLED's Program Coordinator. Ms Pollmann holds a MA in Conflict, Security and Development from the University of Sussex with focus on peace processes. She has previous work experience in the social sector in Uganda and India where her work focused on women empowerment, child protection and anti-human trafficking. She is currently stationed in New Delhi, India.
Asena Karacalti

Asena Karacalti is the South Asia Assistant Research Manager at ACLED, mainly overseeing the Afghanistan dataset.She holds a BA in Law, and an MSc in Cultural Anthropology and Development Studies from KU Leuven, Belgium. Her research interests focus on the transit experiences of migrant and refugee populations and political violence across the Middle East and North Africa. She has past experience as a lawyer and as an expert in migration and asylum organizations.She has previously worked as the Central Asia & the Caucasus, and Africa Research Manager at ACLED.
4 September 2019
Share
TweetShare on Twitter Share on FacebookShare on Facebook Share on LinkedInShare on LinkedIn