In August, with Europeans on their summer vacations, there was a significant drop in the number of reported events in most countries in the region; this is similar to last year’s vacation period. The notable exception was in Russia where protests flared up after irregularities in the Moscow local elections were reported. While in Ukraine, ceasefire violations rose back to average levels in August after a two-week lull following a ceasefire agreement in late July.

In August, migrant arrivals in Greece rose to the highest peak since the March 2016 EU-Turkey deal on curbing migration (UNHCR, 1 September 2019). The increase comes after months of increased tensions between Turkey and Cyprus — backed by Greece and the EU — over drilling rights in the Eastern Mediterranean. It is unclear, however, if this is related to the increase in migrant arrivals. The rise in migrant arrivals to Greece strains local care systems and raises concerns of increased violence involving refugees (InfoMigrants, 2 September 2019), yet reports of such incidents have remained low in August. Meanwhile, the government is cracking down on violent anarchist movements, with riot police and anarchists clashing in raids and retaliatory attacks involving non-lethal weapons and Molotov cocktails in early August. The situation calmed down in late August, but as summer vacation ends, events are expected to increase.

In Romania, mass nationwide protests took place on 10 August remembering and condemning police brutality during the 10 August 2018 protests. The protesters also referred to police corruption and their failure to act in the case of murdered teenager Alexandra Macesanu, demanding the resignation of the Social Democratic Party (PSD) and Alliance of Liberals and Democrats (ALDE) coalition government (RFE/RL, 10 August). The PSD government is likely to face a vote of no confidence by the Parliament, after junior partner ALDE quit the coalition as presidential elections are nearing (Balkan Insight, 27 August 2019).

In Russia, large-scale protests sparked early August when independent and opposition candidates were refused registration in the Moscow local elections in an apparent attempt to interfere with the elections. In response, protests were held throughout the country. In Moscow, large unauthorized protests were met with violent crackdowns and over a thousand detentions on 3 August (Meduza, 4 August 2019). This was followed by the largest authorized protest since 2011 — estimated to include up to 60,000 people — on 10 August, which was again met with crackdowns and mass detentions (BBC, 10 August 2019). Protests have continued in late August, although at lower levels and with less police intervention.

In Ukraine, after a two-week low following the ceasefire agreement that came into effect on 21 July, the number of ceasefire violations increased over August. By last week, levels had almost returned to the year’s average, with 123 armed clashes and 126 shelling incidents resulting in 8 reported fatalities in the Donbass region. 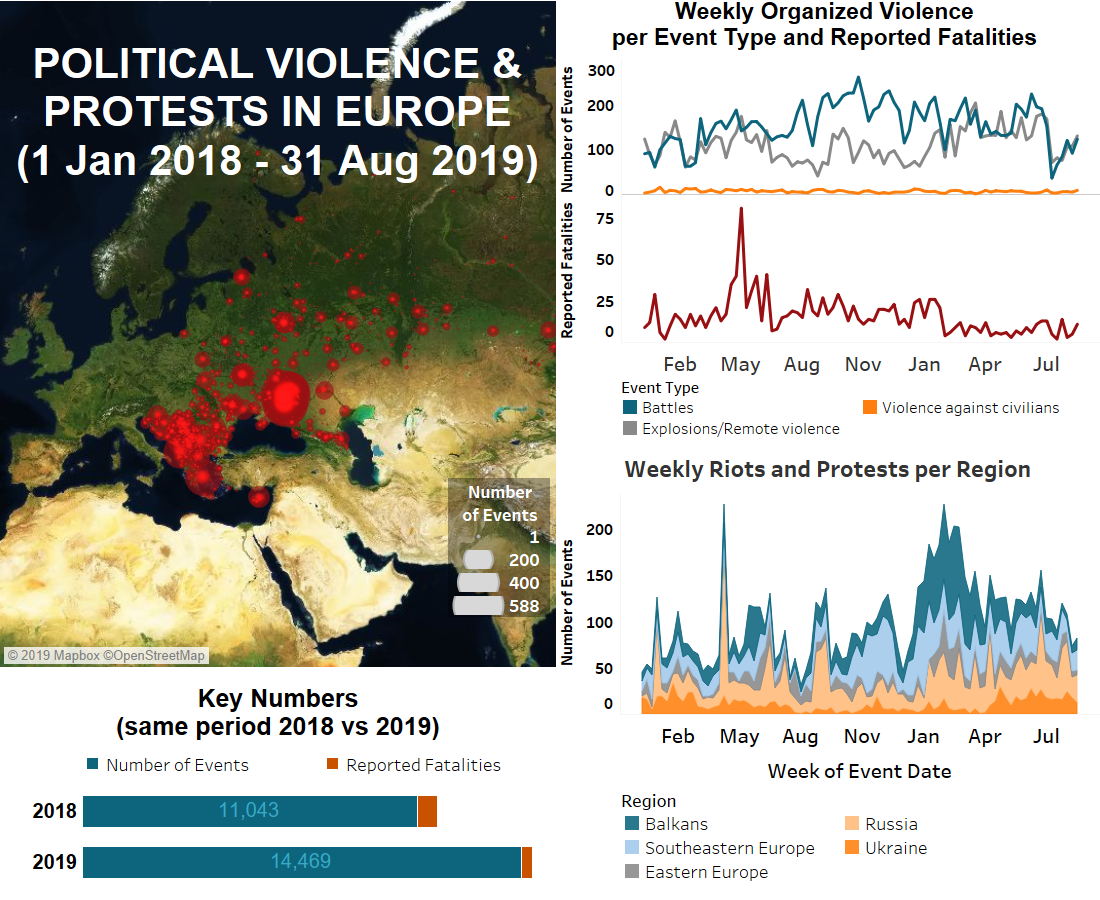