Developments of the past week in Africa include operations against Al Shabaab in Somalia, inter-communal violence targeting civilians in Cameroon, and continued instability in the  Democratic Republic of Congo (DRC) where Islamic State claimed an attack targeting security forces. Demonstrations in Egypt, Zimbabwe, and Sudan are the other significant events of the past week.

In the Democratic Republic of Congo, a significant attack took place in Kitchanga town of North Kivu state during the past week. Although reports state that the army of DRC repelled an attack by Allied Democratic Forces (ADF) on 14 September, Islamic State also claimed responsibility of the attack on the following day for its ‘Central Africa’ branch. Another significant development is a series of attacks in Ituri province, conducted by suspected CODECO (Cooperative for Development of Congo) militia. Dozens of civilian casualties were reported while MONUSCO (United Nations Organization Stabilization Mission in Democratic Republic of Congo) is reported to have repulsed some of the attacks. CODECO is mostly comprised of Lendu ethnic community, and have long been active in Djugu territory of Ituri state (ACLED Regional Overview, Africa, 9 July 2019). Violence in the region has caused displacement of over 10,000 people.

Meanwhile, a Democratic Forces for the Liberation of Rwanda (FDLR) leader — Sylvestre Mudacumura — was killed by the Congolese army on 17 September. Mudacumura was wanted by the International Criminal Court for war crimes and crimes against humanity.

In Somalia, Al Shabaab militants sustained their activities targeting the government workers. An attack in Mogadishu using remote explosives killed at least three civilians. Civilians were further subjected to violence in the country during the past week, as a local source claimed that African Union Mission in Somalia (AMISOM) killed civilians in Qoryooley town of the Lower Shabelle, allegedly as a retaliation to an Al Shabaab attack targeting the Ugandan troops (of AMISOM) in the same town.

In Egypt, a number of protests were held towards the end of the past week, despite a law requiring government approval for public demonstrations since 2013, when the current president Abdel Fattah al-Sisi came to power. Having gathered in Cairo, Alexandria, Suez, and many other cities, the demonstrators accused the president of misspending public funds and corruption. Ongoing through this week, many protests drew the attention of the police forces.

In Zimbabwe, protests took place after the leader of the Zimbabwe Hospitals Doctors Association (ZDHA) went missing during a pay strike. The missing doctor was found some days after his disappearance and claimed to have been subjected to torture; bringing the abductions targeting the political opposition in Zimbabwe to the surface.

Demonstrations in Sudan demanded the removal of the former regime appointees from their current duties. On 19 September, over a thousand protesters marched to the headquarters of the Ministry of Justice in Khartoum, demanding the elimination of all symbols of the former regime in the country. Moreover, in South Darfur, after Rapid Support Forces killed an internally displaced student, riots in the Mershing camp resulted in the killing of four demonstrators by the police forces. In Idan village of the same region, the Darfur communal militia attacking the farmers in Idan village caused protesters in Gereida town demand improvements in security. 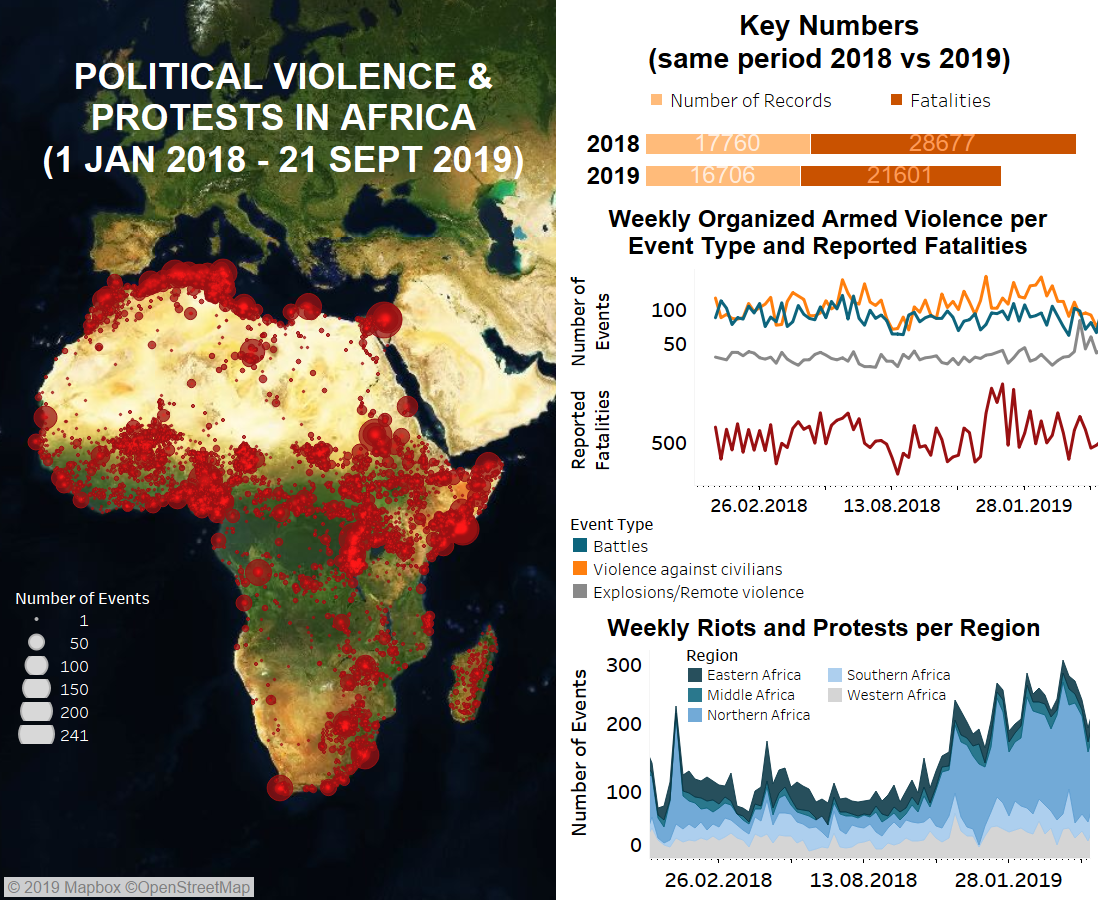 The Armed Conflict Location & Event Data Project (ACLED) is a disaggregated conflict analysis and crisis mapping project. ACLED is the highest quality, most widely used, realtime data and analysis source on political violence and protest in the developing world. Practitioners, researchers and governments depend on ACLED for the latest reliable information on current conflict and disorder patterns.
25 September 2019
Share
TweetShare on Twitter Share on FacebookShare on Facebook Share on LinkedInShare on LinkedIn