During the past week in Africa, key developments include Islamist violence in Sahel region, mass detentions of anti-regime protesters in Egypt and the ongoing battle for Tripoli in Libya.

Attacks targeting civilians in Burkina Faso were concentrated in Centre-Nord region where Jama’ah Nusrat al-Islam wal-Muslimin (JNIM) remains active. On September 28, suspected JNIM militants attacked the village of Komsilga and killed nine people; seven more civilian deaths were reported on the same day in the village of Deneon. Earlier in the week, deadly attacks on civilians also took place in Singa village in the same region.

Having concentrated its attacks on civilian populations since 2018, JNIM violence also continued in Mali (see JNIM: A Rising Threat to Stability in the Sahel, ACLED). On September 23, a JNIM affiliate, Katiba Macina, stopped a local football team’s vehicles in Batouma town of Mopti region and abducted all the team members after killing one civilian. Some days later, Katiba Macina was suspected of an ambush conducted on Malian army convoy in Batouma, resulted in the killing of seven soldiers.

JNIM and the Islamic State in the Greater Sahara (ISGS) have targeted the Tillaberi region of Niger that is proximate to Burkina Faso and Mali; several abductions and lootings were reported in the villages of Banibangou and Tera. The reported attacks by both groups regularly taking place since early 2018 have been on the rise in September 2019.

In Borno state of Nigeria, Boko Haram increased its activity both on civilians and the military forces. On 25 September, a military convoy was ambushed on the Gubio-Maiduguri road of Borno and 14 soldiers were killed. On the same day, the Nigerian army conducted airstrikes against a Boko Haram camp in Kusuma, claiming to have inflicted heavy casualties on the group. However, these battles did not affect Boko Haram’s activities, as in the following days, the group attacked civilians with explosives in Biu, Borno, killing seven people and abducting ten. Another attack followed in Mafa, Borno, where two residents were killed and a local market was burnt down.

Also in Nigeria — in Taraba state — representatives of Tiv and Jukun ethnic groups agreed on a ceasefire in a peace meeting held in Jalingo by September 26. However, two days later, suspected Jukun militias attacked the Tiv community in Akume village of Taraba, continuing this inter-communal violence that re-emerged since April 2019.

In Northern Africa, battles between military forces and Islamic State continued in the North Sinai governorate of Egypt. Islamic State militants attacked several different occasions in Bir Al Abed and Sheikh Zuweiyid, claiming to have inflicted over a dozen fatalities. Ongoing protests against the alleged corruption and misgovernment of President Sisi led to counter-protests showing support for the current government. Anti-regime protesters were targeted by the police forces who conducted mass detentions towards the end of the week. In Cairo alone, over 2,000 people were reported to have been detained for taking part in unauthorized protests.

In Libya, US airstrikes targeted the Islamic State in the south, killing over two dozen militants; the rest of the country was dominated by the battles between Khalifa Haftar’s Libyan National Army (LNA) and the Government of National Accord (GNA). The LNA airstrikes in Tripoli are supported by the United Arab Emirates and led to civilian fatalities and subsequent public discontent in the city.  On September 27, a large crowd of residents in Tripoli gathered on the Martyr’s Square to demonstrate against the foreign-backed LNA offensive on Tripoli, and in support of a civil state and the armed forces aligned with GNA. 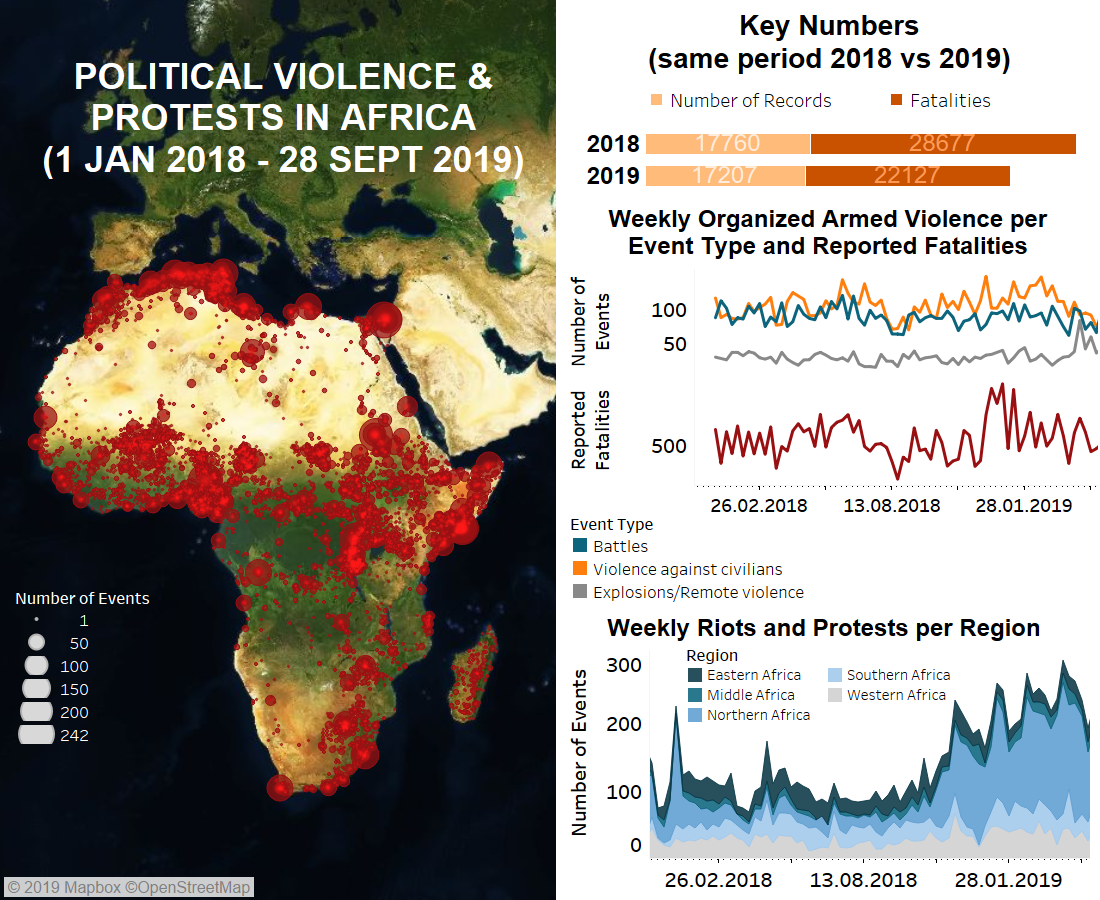