Last week, in South and Southeast Asia, key trends include: election-related violence in Afghanistan; an increase in militant violence in Pakistan and India’s Jammu and Kashmir state; deadly demonstrations in Indonesia; attacks on opposition activists in Cambodia; and anti-government demonstrations in Nepal.

Over the last week, violent events rose significantly in Afghanistan, particularly on Election Day (28 September). Voter turnout was low even in secure areas with early data suggesting that only 25% of registered voters participated (BBC, 30 September 2019). This was reportedly the lowest voter turnout in the last 18 years for Afghanistan, since the Taliban were ousted (Washington Post, 29 September 2019). On Election Day, the Taliban launched a series of attacks on polling centers to disrupt the elections and to deter civilians from voting. Three people were reportedly killed by Taliban mortars in Kunduz city; one civilian was reportedly killed by a bomb next to a polling center in Jalalabad city, Nangarhar; while at least 15 were wounded by another bomb attack in Kandahar. Last year, the Taliban also attacked a similar number of polling centers, which resulted in a similar number of reported fatalities. However, the major difference between last year and this year is that the attacks are concentrated in different areas. Last year, attacks took place throughout central and eastern Afghanistan. This year the majority of attacks on polling centers took place in southern Afghanistan where Taliban attacks have generally increased in 2019. The highest number of attacks occurred in Kandahar Province, the former capital of the Taliban.

Additionally, at least 40 civilians at a wedding party were reportedly killed by a US airstrike (Reuters, 23 September 2019). Afghan forces revealed that they were conducting a raid against the Taliban and Al Qaeda close to the wedding (Long War Journal, 24 September 2019). This is the second week in which a US operation has mistakenly killed civilians. Also, the Taliban claimed to seize control over Qaramqol district in Faryab, and Dara I Sufi Payan district in Samangan, though the Afghan government disputed these claims. In prior weeks, neither district had been a battleground between the Taliban and Afghan forces. The alleged takeover of Dara I Sufi Payan, if true, would be important as it generates a lot of revenue due to its coal mines. ACLED data show that the Taliban took control of the district in 2017 and 2018, though the government seized it back each time. The government has maintained control over the area since November 2018.

In Pakistan, last week, violence perpetrated by domestic armed groups increased following a lull in the number of reported events over the past couple of weeks. Security forces and members of political parties were targeted in two improvised explosive devices (IEDs) attacks in Balochistan province, while in North Waziristan district of Khyber Pakhtunkhwa province security forces and a team of a gas exploration company were targeted in an ambush. Attacks on employees of private companies are more frequent in Balochistan province owing to the separatist militants Baloch Liberation Army (BLA) targeting Chinese-funded projects in the area. BLA violently opposes the China Pakistan Economic Corridor (CPEC), which is part of China’s Belt and Road Initiative and involves the development of a huge port in Gwadar city (Foreign Policy, 30 May 2019). Meanwhile, in North Waziristan, this is only the second report of such an attack on employees of natural resource mining and exploration companies this year.

In India, strict security restrictions, including the continued disconnection of mobile and internet services, remain in place in most parts of the Kashmir Valley. The state has been on lockdown since 5 August when the central government revoked Article 370 which gave special status to J&K. Day-time restrictions were temporarily relaxed in all police station jurisdictions in Kashmir (Economic Times, 28 September 2019). However, in light of Imran Khan’s speech on Kashmir at the United Nations General Assembly on 28 September, authorities again tightened restrictions on movement to prevent possible protests (Reuters, 28 September 2019). Last week, in the most significant outbreak of fighting between militants and state forces since the beginning of the lockdown, at least four militants and two state personnel were reportedly killed in clashes in Ramban, Doda, and Ganderbal districts.

Separatist violence continued in Thailand as a man believed to be a military informant was killed when suspected separatists fired on his residence. The violence comes as it was announced that the head of the National Security Council in Thailand would take over as lead negotiator for the government in peace talks with the separatists (Benar News, 26 September 2019).

The Philippine military and the New People’s Army (NPA) clashed in the Philippines as the government has created new task forces to target the NPA in Western Visayas (Philippine News Agency, 20 September 2019). There were eighteen reported fatalities from police drug raids last week; the deaths come as the Philippines has rejected aid from countries that supported the recent UN resolution calling for an investigation into the ongoing ‘war on drugs’ (Rappler, 30 September 2019).

In anticipation of exiled Cambodia National Rescue Party (CNRP) leader Sam Rainsy’s 9 November return to Cambodia, CNRP members have come under increasing attack and have faced ongoing judicial harassment. Last week, two CNRP members were assaulted by unknown assailants. Several CNRP members have likewise been arrested in recent months (Radio Free Asia, 25 September 2019). In 2017, in a move by Hun Sen to consolidate his power, the CNRP was dissolved so as not to pose a threat to the ruling Cambodia People’s Party (CPP) in the 2018 elections (for more on this, see this ACLED piece).

Demonstrations were reported across Indonesia last week. Students have been at the forefront of demonstrations over proposed laws concerning crime and corruption. The new criminal code is seen as violating the rights of LGBT, women and religious minorities (Human Rights Watch, 23 September 2019). Last week was also marked by particularly deadly rioting in the Papua region stemming from anger over racial taunts; at least 33 people were reportedly killed in the rioting.

In Nepal, the Nepali Congress, the main opposition party, led anti-government demonstrations staged in all 77 districts of the country. The demonstrators accused the government of heading towards authoritarian rule by breaching the constitution and for not acting against corruption, violence and price hikes. 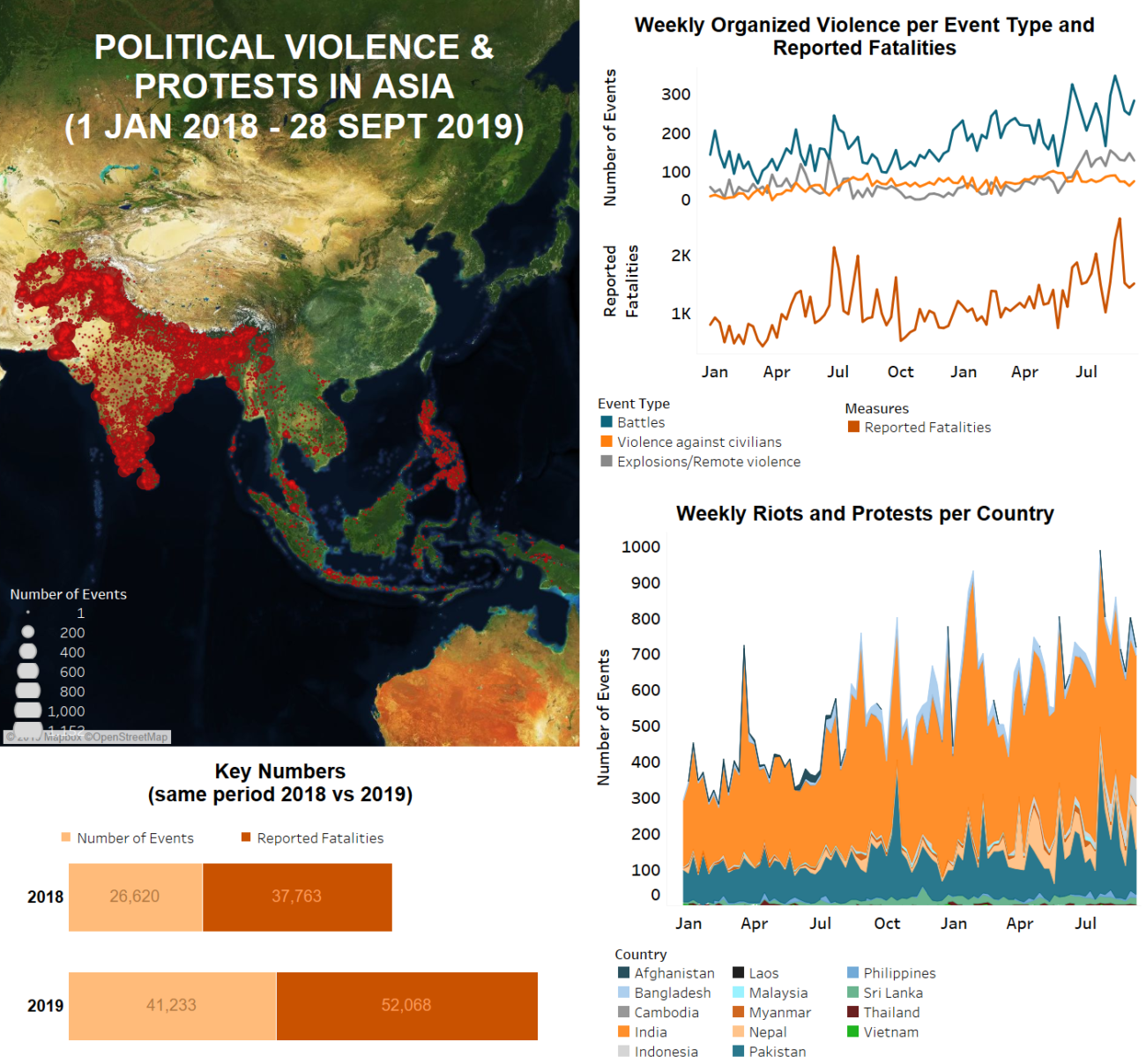