Last week, in South and Southeast Asia, key trends include: the first reported IS attack in Bangladesh since 2017; fighting between state forces and domestic armed groups in Pakistan, Myanmar, Thailand, and the Philippines; and demonstrations against controversial bills in India and Indonesia.

In Afghanistan, at the beginning of last week, the Taliban reported further attacks/closures on polling centers on election day, 28 September, across multiple provinces in the country. The Islamic State (IS) also reported planting 36 IEDs in Nangarhar province to go-off on election day; IS had not launched attacks in last year’s elections. These newly reported attacks significantly increase the volume of attacks the Taliban had launched to deter voters from casting their votes, particularly in comparison to last year’s parliamentary election. A high number of the reported attacks took place in the northern part of the country with the highest number of events in Faryab province, followed by Kandahar as ACLED had initially reported (ACLED, 2 October 2019).

Meanwhile, Afghan forces and the Taliban clashed across the country, with no significant territorial gains for either party. The Taliban attempted to capture Baharak and Khwaja Ghar districts, and Taloqan city in Takhar province (Long War Journal, 2 October 2019). While some sources claim that the Taliban captured the districts, Afghan forces announced they had cleared Baharak and Khwaja Ghar districts from the Taliban, despite battles in Talogan continuing (1TV News, 6 October 2019). More than 4,000 families have been displaced as a result of the clashes (AP, 2 October 2019).

Furthermore, six civilians were reportedly killed in Khwaja Umari district, Ghazni province, by a US airstrike; this is  the third week in a row that a US forces strike leads to civilian fatalities. US Defense Secretary, Mark Esper, last week confirmed that the US stepped up their military operations in Afghanistan following the collapse of peace talks with the Taliban; this is despite the rising number of civilian fatalities in the country as a result of US and Afghan forces’ operations (Politico, 4 October 2019). During the same week, a Taliban delegation met with US Peace Envoy Zalmay Khalilzad in Pakistan’s Capital, Islamabad, on Friday. This is the first meeting between the two sides since President Donald Trump halted peace talks between the US and the Taliban last month (AP, 5 October 2019). There still appears to be a willingness to continue peace talks from the Taliban and Pakistani officials despite the official halt called by the US.

In Pakistan, violence perpetrated by domestic armed groups continued with attacks on tribal leaders and security forces in Khyber Pakhtunkhwa and Balochistan provinces. A tribal leader was reportedly killed by an IED planted by unidentified assailants in Bajaur district of Khyber Pakhtunkhwa on 28 September, marking the third IED attack during the month of September. IED attacks have been a signature tactic of the Tehreek-i-Taliban Pakistan (TTP) in the past and the recent escalation of IED attacks – even though the identity of the attackers is unknown – may signify the resurgence of TTP in the district (Gandhara, 5 September 2019). In Balochistan, the spate of violence continued with suspected militants launching gun and bomb attacks on security forces in Panjgur and Loralai districts. Five such incidents were reported during the past two weeks.

Meanwhile, in the restive Kashmir region, heightened levels of cross-border shelling and small arms fire continued along the Line of Control (LoC) and Working Boundary, resulting in the reported deaths of three Pakistani civilians and an Indian army porter. In other developments, Kashmir solidarity rallies against the Indian government’s revocation of Article 370, which gave special status to Jammu & Kashmir (J&K), continued throughout Pakistan. On call from the Jammu and Kashmir Liberation Front (JKLF), members of the Kashmiri community from all over Pakistan gathered in large numbers in Muzaffarabad district of Azad Jammu and Kashmir in an attempt to march towards the LoC.

In India, amidst an ongoing security lockdown in J&K, journalists in Srinagar staged a protest against the continued disconnection of mobile and internet services in the region. The protest was the first reported incident of journalists staging a protest in Kashmir since 5 August 2019, when the central government revoked Article 370. The protest, combined with an increasingly visible number of locally published opinion pieces, suggests that journalists in J&K are becoming more able and open in voicing criticisms of the lockdown, despite ongoing restrictions on reporting by local newspapers.

Elsewhere, a series of protests against the Citizenship Amendment Bill (CAB) were held across northeast India and West Bengal. As examined in a previous ACLED report, opponents of the bill, which would grant citizenship rights to undocumented non-Muslim immigrants, contend that legitimizing undocumented immigrants would threaten the indigenous communities of the region.

In Bangladesh, IS claimed responsibility for a bomb explosion targeting an office of the ruling Bangladesh Awami League (AL). The explosion marked the first reported IS attack in Bangladesh since 2017.

Clashes between the Myanmar military and the Arakan Army (AA) continued across northern Rakhine state in Myanmar; meanwhile, clashes between the Myanmar military and other ethnic armed organizations (EAOs) in the Brotherhood Alliance (of which the AA is part) in Shan state have decreased. As well, the United Wa State Army (UWSA) was involved in a shoot-out with drug smugglers in eastern Shan state that reportedly left eight drug smugglers dead. The incident is seen as a pivot towards an anti-drug agenda as the UWSA have long been one of the largest producers of narcotics in the region (Radio Free Asia, 4 October 2019).

Separatist violence continued in Thailand in Yala and Narathiwat provinces, resulting in two reported fatalities. The violence comes as a leader of the separatist group Barisan Revolusi Nasional Melayu Patani (BRN) was arrested after years in hiding (Bangkok Post, 4 October 2019).

Activists from the banned Cambodia National Rescue Party (CNRP) continued to be arrested as the leader of the CNRP, Sam Rainsy, prepares for return to Cambodia from exile: a return that Prime Minister Hun Sen has threatened to meet with military force (Radio Free Asia, 2 October 2019).

Across Indonesia, demonstrations against revisions to crime, land, and corruption bills continued. There were 25 recorded demonstration events last week. Changes to these bills have led to significant disorder in the country as Joko Widodo embarks on his second term as president (South China Morning Post, 7 October 2019). Meanwhile, thousands of people have fled the Papua region in the wake of deadly riots over racial taunts that reportedly left 33 people dead the week before last (Al-Jazeera, 7 October 2019). 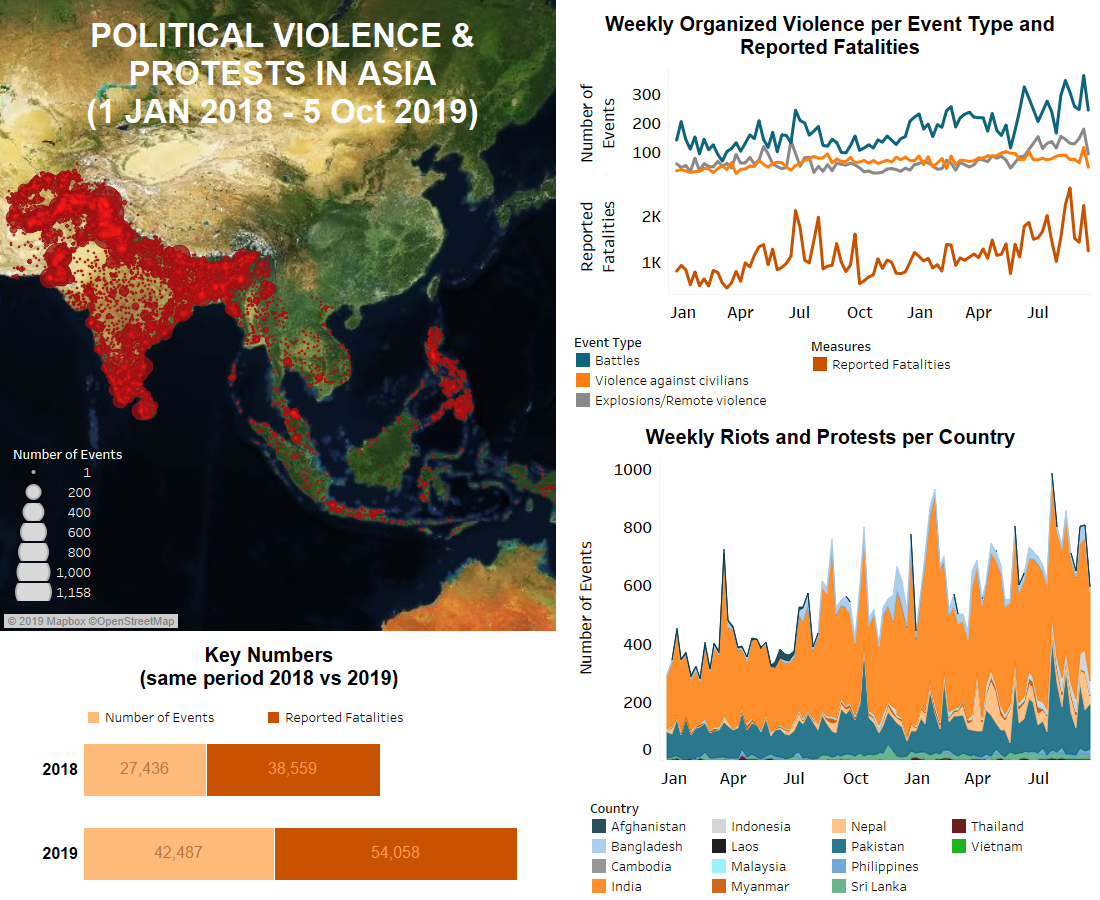