Last week in the Middle East, calm returned to Iraq after several days of violent anti-government demonstrations. Syria was the scene of heightened regional tensions as Turkish forces launched a military offensive against Kurdish fighters in northern Syria, whereas reported violence in Yemen declined. In another development, an Iranian oil tanker was hit by two missiles off the coast of Saudi Arabia in the Red Sea, raising alerts about maritime and oil infrastructure security in the Middle East.

Following deadly riots in Baghdad’s Sadr City on Sunday that led to 15 further reported fatalities, and other sporadic demonstrations in the first half of the week, the lethal unrest in Iraq appears to have halted for the moment. Authorities have used a combination of different tactics to stem further unrest, including an internet blackout, arrests of demonstrators, the targeting of reporters, as well as announcing a package of reforms and a reshuffling of the cabinet. Furthermore, Prime Minister Abdul-Mahdi has announced the formation of a commission to investigate the recent incidents that led to the death of more than a hundred demonstrators. This came in response to Grand Ayatollah al-Sistani’s remarks blaming the government for the killing of demonstrators, and giving authorities two weeks to find out who had given the orders to shoot. Earlier, authorities blamed “unidentified snipers” for the killings, only accepting responsibility for the military’s “excessive force” in the Sadr City district of Baghdad, and the killing of a protester in Babylon by anti-riot police (Al Jazeera, 12 October 2019).

Meanwhile, Turkey’s military launched a long-planned offensive involving air strikes, artillery and ground attacks into northern Syria. The offensive, dubbed “Operation Peace Spring”, was launched on Wednesday just days after US President Trump announced a withdrawal of US troops from northern Syria. Much of the area has been outside the control of the Syrian government since 2012, when forces loyal to Assad withdrew from the region to fight rebels elsewhere, allowing Kurdish groups to take control. The biggest Kurdish group, the People’s Protection Units (YPG), established an alliance with local Arab fighters in 2015, forming the Syrian Democratic Forces (QSD) to fight against the Islamic State (IS). With the help of US-led coalition airpower and weaponry, the Kurdish-led QSD drove IS out of the area and set up an autonomous administration to govern the region. Despite disagreement about Kurdish autonomy, Assad’s forces did not seek to retake the territory (BBC, 14 October 2019). Yet, Turkey regards the YPG as an extension of the Kurdistan Workers’ Party (PKK), which has fought for Kurdish autonomy in Turkey for three decades and is designated as a ‘terrorist group’ by Turkey, the US, and the EU. The current offensive is aimed at pushing Kurdish forces away from the border area and creating a safe zone reaching 32km into Syria. Turkey plans to use this area to resettle some of the 3.5 million Syrian refugees currently living in Turkey. Turkish forces and local fighters supported by the Turkish government began pushing into Syria along several fronts, capturing the towns of Tell Abiad in Raqqa and Ras al Ain in Al-Hasakeh governorates by the end of the weekend. In addition, Operation Peace Spring moved into the Nusf Tall area in Raqqa province and captured part of the M4 international highway, effectively cutting YPG/QSD-controlled northeastern Syria into two. Without access to the M4, YPG-led QSD forces are unable to move troops and equipment between Raqqa and Al-Hasakeh governorates. In the first four days of Operation Peace Spring, at least 31 civilians were reported killed by ground and aerial bombardments in Syria. Civilian casualties were also reported in the Kurdish shelling of Turkey’s border towns. Furthermore, according to the UN Office for the Coordination of Humanitarian Affairs (OCHA), at least 150,000 civilians had fled their homes by Sunday (OCHA, 13 October 2019). Turkey is moving forward with the operation despite harsh criticism from the EU, the US, and the Arab League, claiming that it is acting under Article 51 of the UN Charter and UN Security Council Resolutions regarding the fight against terrorism (Sputnik, 13 October 2019).

In Yemen, Southern Transitional Council (STC) forces made prominent territorial gains by capturing several strategic towns and military sites in northern Ad Dali governorate from Houthi forces, including al-Fajir and surrounding areas in Qaatabah district. But overall, a decline in reported violence could be observed across the country in the past week. On the one hand, this is likely related to the Hadi government and the STC being close to reaching a power-sharing agreement to end their standoff. The two groups fought on the same side against the Houthis for years, but clashes broke out between them in August 2019 after the secessionists turned on Hadi’s government and seized parts of Aden. The UAE – which has supported the STC, but has been scaling down its presence in Yemen since July – started withdrawing troops from Aden last week in a bid to facilitate the deal (NY Time, 11 July 2019). On the other hand, the decline in reported violence can likely be attributed to reported back-channel negotiations between Saudi officials and the Houthis (Financial Times, 11 October 2019). Progress on both tracks may bring the war in Yemen closer to an end.

Finally, the Iranian oil tanker Sabiti was reportedly hit by two missiles last Friday while traveling through the Red Sea about sixty miles off the Saudi Arabian port city of Jeddah. No one has claimed responsibility for the attacks, and despite initial speculations about Saudi involvement, Iran has not publicly blamed its arch-rival for the incident. On Saturday, the Secretary of Iran’s Supreme National Security Council announced that Iranian oil tankers Helm and Happiness 1 had also been targeted by damaging activities over recent months in the Red Sea. Earlier reports had indicated that the tankers suffered from a technical malfunction (BBC News, 12 October 2019). Friday’s incident has raised renewed concerns about maritime safety in the Red Sea and the Persian Gulf – two crucial shipping routes through which Middle East crude exports are sent – where a series of oil tanker attacks and seizures have been reported since May 2019. Some analysts suggest that Friday’s attack could have been carried out by Israel in an attempt to disrupt Iran’s oil exports (France24, 11 October 2019). Others suggest that the recent attacks could have been aimed at raising the stakes ahead of Pakistan’s Prime Minister’s visit to Tehran and Riyadh in a bid to defuse regional tensions. They argue that a Japanese oil tanker was also attacked while Japan’s Prime Minister was in Iran as part of a mediation effort (Financial Times, 10 October 2019). Given Iran’s cautious reaction, it is unlikely that the recent attack will derail efforts to de-escalate tensions between Iran and Saudi Arabia, which, if successful, would further ease tensions in Yemen. 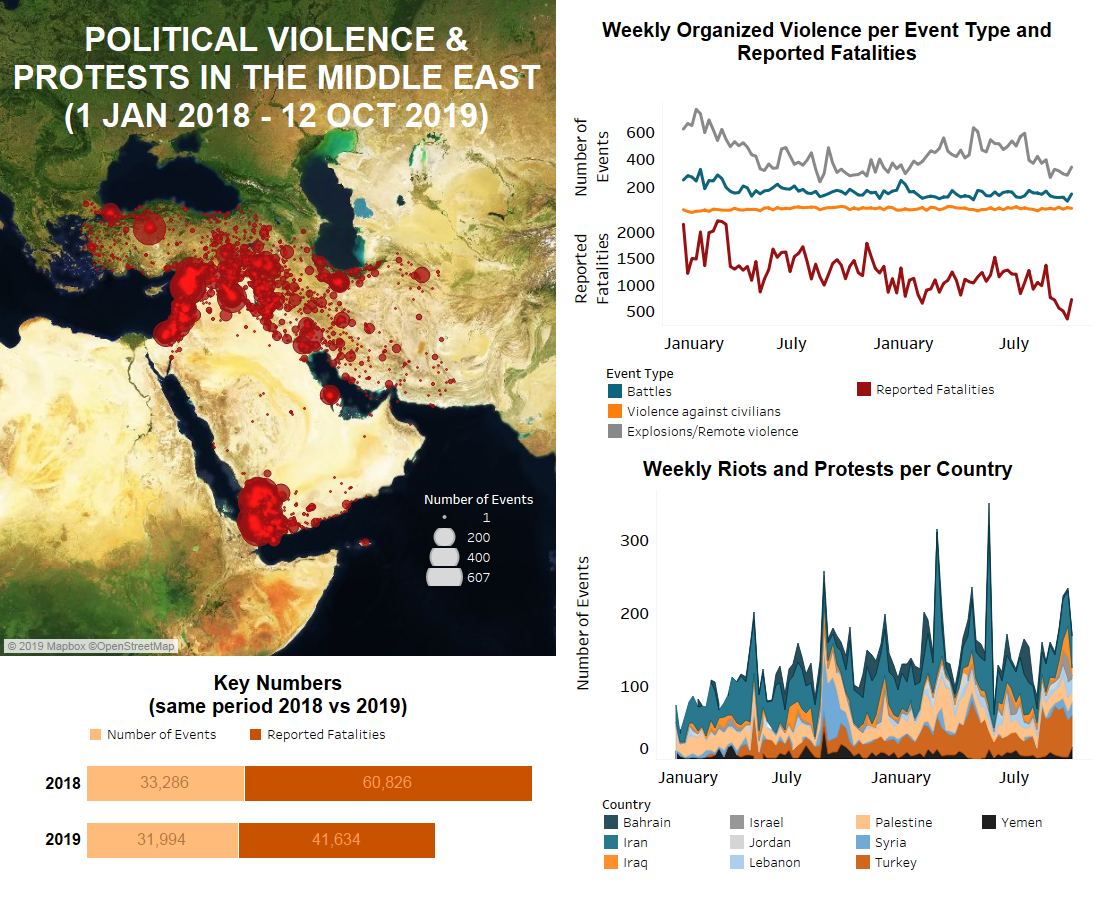