This week, while protesters amassed in Guinea to oppose President Condé’s bid to extend his tenure in office, the violence of Mozambique’s 2019 campaign season continued through election day. In Ethiopia, clashes between the military and the Bodi community, and an incursion of gunmen from across the Djiboutian border left many dead, while clashes in eastern Democratic Republic of Congo displaced thousands. Islamist violence persisted in Burkina Faso, Mali, Nigeria, and Cameroon.

After Guinea’s President Condé encouraged parliamentarians to revise the constitution, allowing him to seek a third term, Guinea experienced a surge in protests and riots during the past week. Violence peaked on October 14th and 15th, when police and military forces fired live ammunition to subdue the demonstrators. At least four civilians were killed in the protests in the capital, Conakry. President Condé is Guinea’s first democratically elected leader, coming to power in 2010 after the death of his predecessor in 2008. There is mounting concern that the President — once a prominent opposition leader himself–is stifling dissent and gambling with the country’s hard-won democracy. Demonstrations were also held in many other cities including Boke, Kindia, Labe, Mamou, and Nzerekore.

After a violent campaign season, in Mozambique, people went to the polls on October 15th. As expected, the Mozambique Liberation Front (FRELIMO) won a vast majority of votes (71%). Throughout the day, suspicion and mistrust resulted in multiple instances of election-related violence. In Zumbo, RENAMO’s Women’s League President and her husband were killed by unidentified gunmen; and in Nacala, one voter was killed and four injured as police tried to disperse a crowd gathered at the local polling station. In northern Machanga district, suspected opposition Mozambican National Resistance (RENAMO) supporters attempted to steal ballot boxes and assaulted the polling station chairperson. Police used tear gas and gunshots to dispel RENAMO supporters, who believed polling station presidents had tampered with votes to favour the incumbent FRELIMO.

Security concerns persisted in Ethiopia this week. On 14 October, in the Afar region bordering Djibouti and Eritrea, an unidentified armed group attacked the pastoralist village of Afambo Woreda, killing 17 civilians and wounding at least 34 others. The motivations of the group, reported to have crossed into Ethiopia from Djibouti, remain unclear. The Government of Djibouti issued a statement affirming that the Djiboutian military had no part in the incursion. In response to the attacks, demonstrators gathered in Galaluaa, Awash, Koneba, Gewane, and Afambo cities in Afar region to protest the attacks. Clashes between the Bodi community and Ethiopian soldiers continued in Jinka, as resettlement programs displace locals to make room for the new Gibe III dam and sugar plantations. An estimated forty people have died in this dispute since September 15th.

Meanwhile, from October 13 to 18th, in Minembwe, South Kivu, in the Democratic Republic of Congo, a series of clashes between the Armed Forces of the Democratic Republic of Congo (FARDC) and Mayi-Mayi militia is reported to have killed three civilians, and displaced thousands. This wave of displacement prompted provisional deputies to call for an investigation into the security situation in Fizi and Uvira territories, and for the urgent distribution of humanitarian assistance (L’Interview.cd, 19 October, 2019).

The Group for Support of Islam and Muslims (JNIM) and/or Islamic State (Greater Sahara) continued to engage the militaries of Burkina Faso and Mali, as well as other armed groups in the area. Boko Haram’s attacks against civilians also continued in Nigeria and Cameroon. The attacks were especially deadly along the border, with seven civilian deaths in Cameroon’s Extreme Nord province. Meanwhile, the Nigerian Air Force continues to target Boko Haram. On October 13th and 18th, it conducted airstrikes against Boko Haram camps in Ngoshe and Boboshe, killing several fighters. 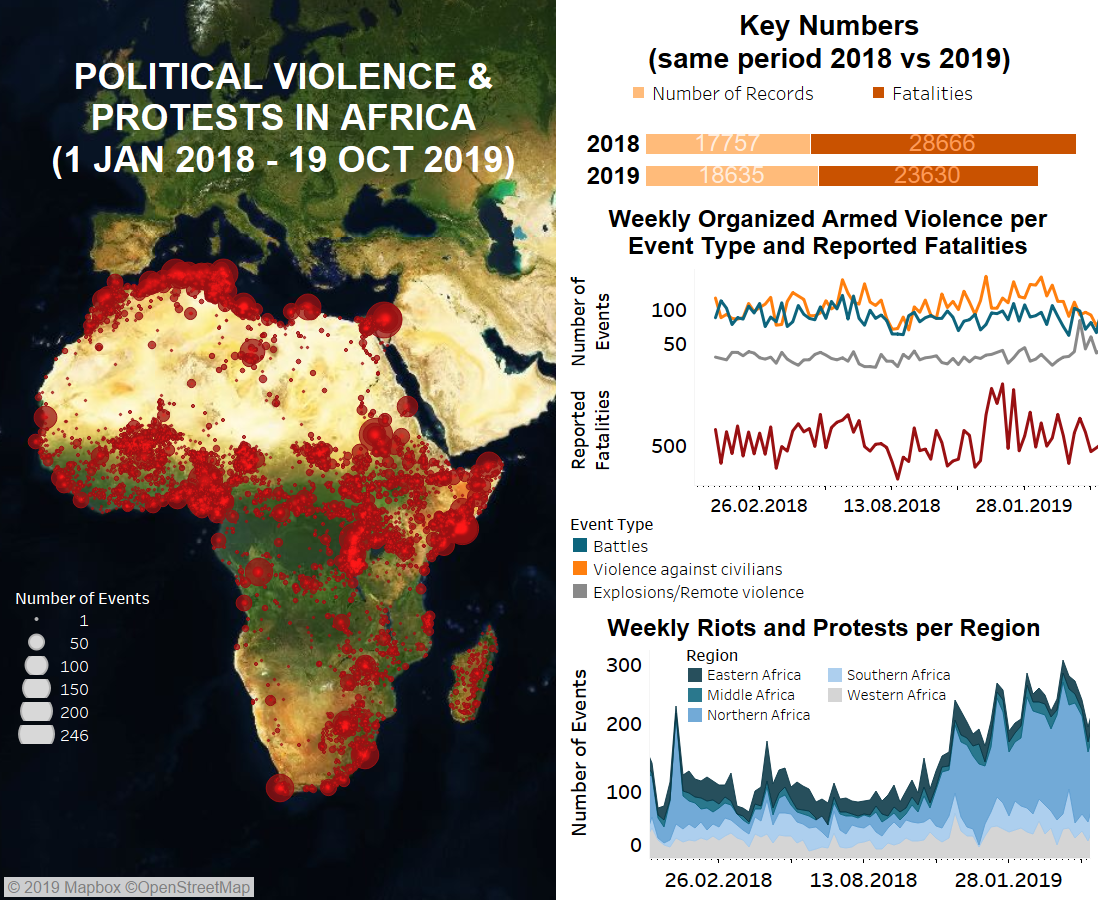