Last week in the Middle East, Operation Peace Spring in northern Syria dominated the news. Security vacuums in the area have allowed the Islamic State (IS) to launch renewed attacks in both Syria and Iraq. Widespread anti-government demonstrations also spread across Lebanon. In Saudi Arabia and Yemen, there has been a general decrease in political violence since September. The Jeddah talks present a possibility for the end of the conflict in Yemen and the formation of a new government.

In northern Syria, the Turkish-led military offensive, Operation Peace Spring, continued last week. Turkey aims to secure a 30-kilometer buffer zone within northeastern Syria to protect Turkey from the security threat posed by Kurdish-Syrian forces active in the area. In Turkey, demonstrations in favor of the operation were held across the country and racially-motivated violence against Kurds increased. On the other side of the border, Turkish and allied Syrian forces captured the key cities of Tell Abiad in Raqqa province, as well as Tell Halaf and Ras Al Ain in Al-Hasakeh province. The latter was recaptured by the Syrian Democratic Forces (QSD) and Kurdish People’s Protection Units (YPG) fighters. Before the American withdrawal, the primarily Kurdish QSD forces were supported by the Global Coalition Against Daesh, particularly the US. Facing domestic and international condemnation for the swift and abrupt decision to withdraw, the Trump administration on 17 October negotiated a 120-hour ceasefire (BBC, 17 October 2019). The pause in the offensive was designed to allow Kurdish forces to withdraw to beyond Turkey’s proposed buffer zone, and to allow humanitarian aid to reach the affected areas. Despite continued artillery fire and sporadic skirmishes, the ceasefire largely held in its first few days on both sides of the border.

In response to the Turkish-led offensive, QSD and Syrian Kurdish officials negotiated a deal for Syrian government forces to enter QSD and YPG-held towns in northeastern Syria, in return for protection from the Turkish-led assault. For the first time in several years, Syrian regime forces entered the strategic towns of Menbij and Ain Al Arab (Kobani) in Aleppo province, Ein Issa and Al Tabqa in Raqqa province, and Al-Hasakeh city in Al-Hasakeh province (Washington Post, 13 October 2019). While this move prevented their fall to Turkish-led forces in the short term, the return of government forces was not entirely welcome. Anti-regime protests were reported across QSD-held areas. Russian forces were also deployed near the strategic town of Menbij in Aleppo province to act as a buffer between Turkish and regime forces and to mollify the concerns of local residents in newly-reclaimed government-controlled areas.

As American military forces continued to withdraw from their positions across northeastern Syria, IS fighters took advantage of the chaos to launch attacks on QSD forces and civilian populations in Deir-ez-Zor and Al-Hasakeh provinces. In the first eight days of Operation Peace Spring, over 250,000 people were displaced (SOHR, 12 October 2019). As more refugees are expected by border countries and news of escaped IS militants were reported, Iraq has deployed more troops to the border with Syria, in a preemptive move to ensure that IS militants do not sneak across the border (Rudaw, 15 October 2019).

In Iraq, IS has taken advantage of the security void as state forces tried to secure the three million Shiite pilgrims for Arbaeen and recuperate following weeks of deadly demonstrations. In one of the most prominent moves by the group this year, IS militants overtook the village of Mukhaysah in Diyala province. However, this move by IS was months in the making, as these areas in the Waqf basin have been under constant mortar and sniper attacks over the past two months. This has resulted in the abandonment of the village by the residents and a swift takeover by IS (Yaqein, 12 February 2019). Security forces will need to secure the rest of Muqdadiyah district to ensure that more villages are not abandoned, otherwise, IS will continue to overtake villages in the area.

In Lebanon, massive anti-government protests began on Thursday after Lebanon’s government proposed a number of tax increases, including on messaging and video chatting services such as WhatsApp, Skype, and FaceTime. These tax increases were aimed at narrowing Lebanon’s deficit; however, they sparked rage across the country that quickly gained momentum, despite the cabinet immediately withdrawing the proposed ‘WhatsApp tax’. Demonstrators have a wide range of grievances with the government that have contributed to the popularity of the protests across all sects, ages, and political affiliations (Times of Israel, 18 October 2019). The protests aim to unseat Lebanon’s sectarian ruling elite that have mostly kept peace in the country since Lebanon’s civil war from 1975 to 1990. However, they have also led the country into economic crisis, failing infrastructure, and widespread corruption (AP, 20 October 2019). On Saturday, from a population of just over 4 million, a reported 1.2 million people attended protests nationwide (Newsweek, 20 October 2019). These are the largest demonstrations since the 2015 ‘You Stink’ protests over the waste crisis (Al Jazeera, 19 October 2019). The demonstrations have been largely peaceful so far, though violent riots were reported across the country too. The vast majority of the rioting activity involved blocking roads and lighting tires on fire; there were relatively few reports of clashes with police. Two Syrians were killed on Friday in Beirut when rioters set fire to a building from which the Syrians were unable to escape. The Christian party (Lebanese Force) announced its resignation from the government on Saturday (Al Jazeera, 20 October 2019). The government is under intense pressure to meet demonstrators’ demands for sweeping political reforms. The government will have to make dramatic moves in order to quell the protest movement.

Meanwhile, following a standstill that lasted from late September, clashes between pro-Houthi and Saudi-affiliated forces resumed in Saudi Arabia, and especially in Jizan province where shelling and sniper attacks took place. While these attacks are not large in scale, this shows a tentative move on the pro-Houthi side to continue to fight.

Moreover, in Yemen, Saudi forces took control of Aden’s airport and ports, following the non-violent withdrawal of the UAE-backed Southern Transitional Council (STC) forces last week. This is in an effort to end a power struggle between the Saudi-backed Yemeni government and southern separatists (Reuters,14 October 2019). As fighting continues on the frontline in Ad Dali and Ibb governorates, several reports noted intra-Houthi fighting, and alleged executions of pro-Houthi members refusing to fight.

Although the UN humanitarian chief described September as the deadliest month for civilians in Yemen this year (AP, 18 October 2019), violence has generally decreased across the country in October. As the Jeddah talks continue, a rumored ‘Jeddah Agreement’ could be on the horizon. The negotiations represent an important step towards ending the conflict between the Saudi-backed Hadi government and the STC, and the formation of a new government (Asharq al-Awsat, 16 October 2019). 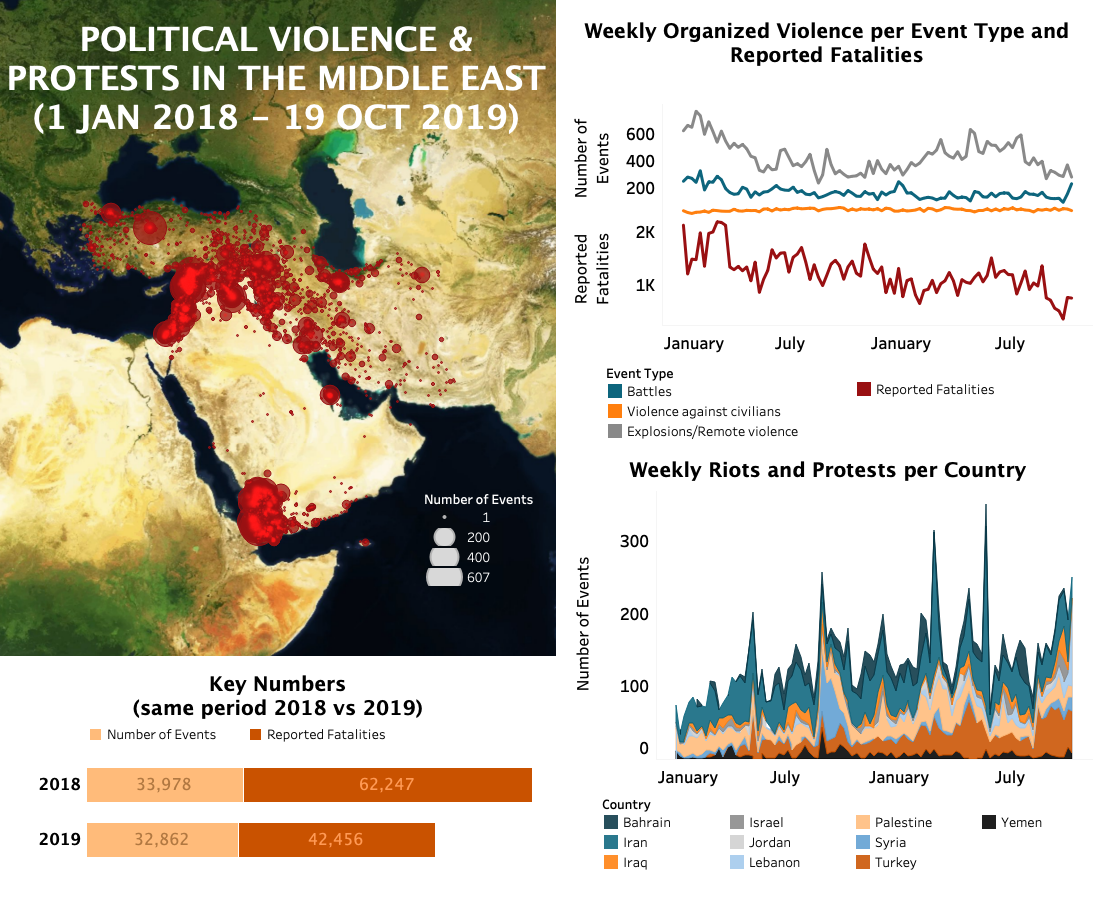