In South and Southeast Asia last week, key trends include: continued armed clashes between state forces and domestic rebel groups in Afghanistan, Myanmar and the Philippines; ongoing cross-border violence between Indian and Pakistani forces in Kashmir; and an attack on civilians by the separatist West Papua National Liberation Army in Indonesia.

Armed clashes continued last week in Afghanistan as the government reclaimed Dahana i Ghuri and Darqad districts in the northern provinces of Baghlan and Takhar from the Taliban. In recent years, the Taliban has gained ground in northern Afghanistan as it has expanded its insurgent activities from its traditional strongholds in southern and eastern Afghanistan to once peaceful regions in the north. Darqad district was seized by Taliban forces in September 2019, while Dahana i Ghuri had been under Taliban control since August 2016. Heavy clashes in Afghanistan’s northern provinces have been ongoing for months as both the Taliban and the US-backed Afghan military have stepped up efforts to gain the upper hand in peace negotiations. US-Taliban talks in Doha were abruptly halted by US President Trump last month following the death of a US soldier and 11 other people in a Taliban bomb attack in Kabul. However, renewed international diplomatic efforts in recent days have raised hopes about the resumption of talks (VOA, 27 October 2019). Amidst official confirmation that the United States has been reducing the number of its troops in Afghanistan by 2,000 over the last year, some experts have voiced concern about the reduced US leverage over the terms of any potential settlement with the Taliban (New York Times, 21 October 2019).

In India, Block Development Council (BDC) elections were held for the first time in Jammu & Kashmir (J&K) on 24 October. The BDC constitutes the second tier of the system of local self-government in J&K. The elections were held amidst ongoing controversy surrounding the security lockdown and communication blackout following the Indian government’s revocation of Article 370 since 5 August 2019. Additionally, following the abrogation of Article 370, opposition party leaders in J&K were detained or placed under house arrest, preventing them from participating in political activities in the build-up to the elections. With the exception of India’s ruling Bharatiya Janata Party (BJP), major parties in J&K had boycotted the elections, citing the revocation of Article 370 and the detention of their leaders (Times of India, 25 October 2019). This thus raised questions about the legitimacy of the elections (Hindustan Times, 30 September 2019).

Whilst the elections passed mostly without violence, several schools, chosen as BDC polling stations, were reportedly targeted in arson attacks by suspected militants. A high voter turnout (98%) was reported and independent candidates unexpectedly won 19 of 22 districts across J&K, despite the BJP’s ability to campaign across the state and avoid mainstream political leadership (The Wire, 26 October 2019). The BJP, who had expected to win 90% of the BDC seats (The Hindu, 7 October 2019), failed to significantly extend their power in the political hierarchy of the Kashmir valley. Meanwhile, in other developments, already heightened levels of cross-border violence between Indian and Pakistani forces escalated further with at least 12 fatalities reported along the Line of Control.

Finally, in addition to continued clashes in the region, in Indonesia, the separatist West Papua National Liberation Army (TPNPB) killed three taxi drivers who they accused of being soldiers. Elsewhere in the country, students in several cities protested as President Joko Widodo was sworn in for a second term on 20 October. After being sworn in, the President appointed his election rival, Prabowo Subianto, to be Minister of Defense. Subianto’s loss in the presidential elections earlier in the year had led to deadly riots (BBC, 27 October 2019). Known for his involvement in human rights violations in the past, Subianto’s appointment comes at a time when unrest in the country is at a high and many are doubting Widodo’s commitment to liberal reforms (The Diplomat, 24 October 2019). 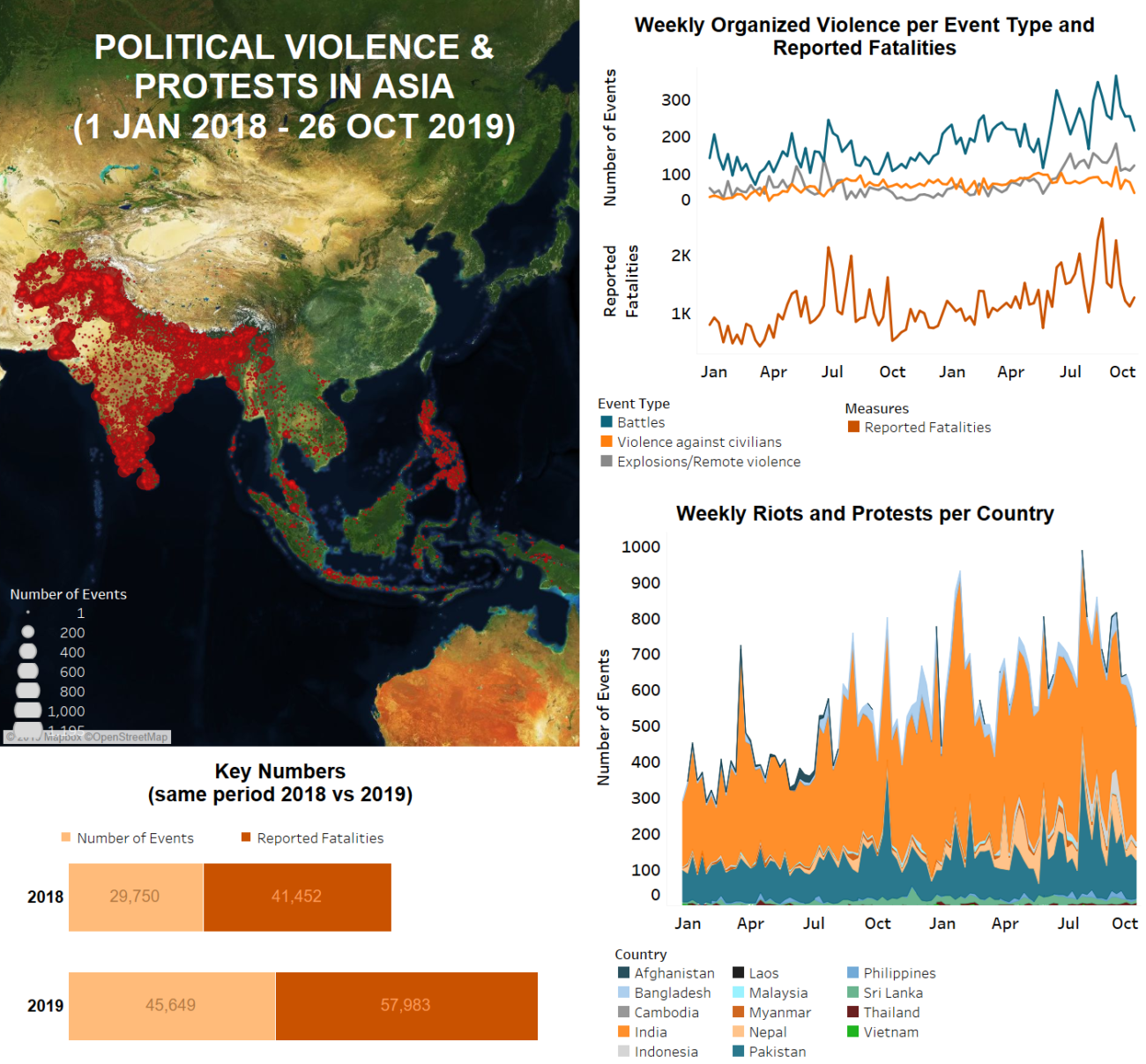