In Southeast Asia, key trends last week include: a deadly attack by suspected separatists in Thailand’s deep south; ongoing fighting between the Arakan Army and the military in Myanmar; an increase in ‘vigilante’ violence against drug suspects in the Philippines; and continued arrests of Cambodia National Rescue Party members in Cambodia.

One of the deadliest attacks since 2001 by suspected separatists occurred in Thailand’s deep south last week (International Crisis Group, 8 November 2019). On 5 November, separatists attacked a village defence volunteer checkpoint, reportedly killing 15 people. The Barisan Revolusi Nasional Melayu Patani (BRN) are thought to be behind the attack. The attack occurred despite an overall decline in separatist violence in the country in recent years, pointing to the continued threat posed by separatists in the deep south region.

Meanwhile, fighting continued between the Myanmar military and the Arakan Army (AA) in Myanmar, with one Rohingya civilian reportedly killed in the crossfire in Rakhine state last week. Abductions in the region have also been occurring more frequently. Notably, the AA abducted ten people, including a National League for Democracy (NLD) member of the Union Parliament from Chin state, as well as several Indian nationals working on the Kaladan Multi-Modal Transit Transportation Project (Irrawaddy, 4 November 2019). One of the abducted Indian civilians died while in AA custody, though the AA claims the death was due to the man’s poor health. All of those abducted were eventually released, except for the NLD MP.

In the Philippines, Vice President Leni Robredo, a vocal critic of President Duterte and his “war on drugs,” accepted a position as co-chair of the Inter-Agency Committee on Anti-Illegal Drugs (ICAD). The move comes after Duterte challenged her to do a better job addressing the drug issue than the government. It remains to be seen whether the position will be a “political trap” for Robredo as some have warned (Asia Times, 8 November 2019). There is concern that the position is meant to weaken Robredo as she will now share culpability for the drug violence in the country. The appointment comes in light of an increase in ‘vigilante’ violence against drug suspects last week. Anti-drug vigilantes, many with ties to the state, often carry out attacks on drug suspects with impunity (for more on this, see this ACLED piece).

Finally, members of the opposition Cambodia National Rescue Party (CNRP) continue to be arrested in Cambodia. The return of exiled CNRP leader Sam Rainsy, planned for 9 November, was delayed after his original plan to enter Cambodia through Thailand was thwarted. Another CNRP leader, Kem Sokha, who had been detained for two years since the CNRP was dissolved in 2017, was released from house arrest. However, he has been restricted from participating in politics or leaving the country. This move has been viewed as an effort by Prime Minister Hun Sen’s government to ease pressure prior to a decision this week by the European Union, Cambodia’s largest trading partner, regarding preferential market access under the “Everything but Arms” scheme. Sokha’s release is likewise seen as a move to further weaken and divide the opposition to Hun Sen by playing up the rivalry between Rainsy and Sokha to lead the CNRP (South China Morning Post, 11 November 2019). 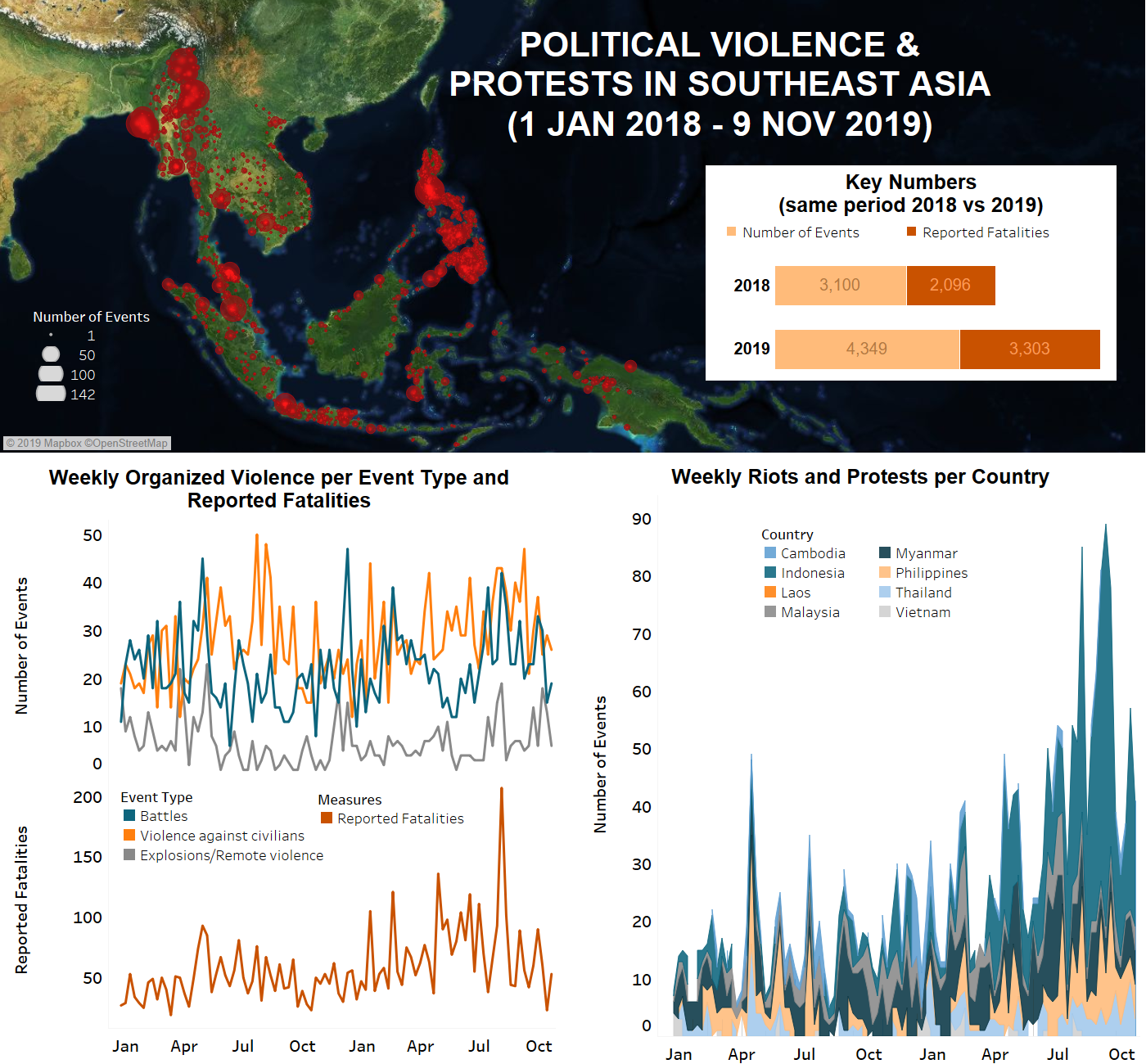