Last week in the Middle East, the ‘Riyadh Agreement’ was signed in Saudi Arabia uniting the Southern Transitional Council (STC) and pro-Hadi forces against pro-Houthi forces in Yemen. Pro-Houthi forces appear to be preparing for major attacks in response. In Syria, the Sochi-ceasefire largely held despite continuing territorial exchanges. Following the death of Islamic State (IS) leader Abu Bakr Al Baghdadi, IS activity in Syria and Iraq dropped as the group recalibrates. Anti-corruption protests were reported in Kuwait and Israel as major demonstrations continued in Iraq and Lebanon.

In Saudi Arabia, the Hadi government of Yemen and southern separatists from the STC signed the so-called ‘Riyadh Agreement’ on 5 November in an effort to end a power struggle in the south. Since August 2019, the southern power struggle became a new frontline in the multifaceted conflict in Yemen (Euronews, 7 November 2019). The agreement pushes for official participation of the STC and other southern movements in the Hadi-led government and gives Southern representatives a seat in UN-led peace talks. One of the main features of the agreement is the planned unification of military forces under a unified defense ministry, and the security forces under the interior ministry. Saudi military forces will assume primary security in Aden to facilitate the return of the Hadi government to the temporary capital, as all government and STC military forces were given 30 days to redeploy outside Aden.

Pro-Houthi forces reportedly dug up to 19 trenches in Hodeidah to prepare for an intensification of attacks on their forces following the signing of the ‘Riyadh Agreement.’ The UN observation posts installed a couple of weeks ago did not have any measurable effect on the fighting in Hodeidah, as fighting continued and increased in the area over the last week. Pro-Houthi forces also blew up one of the largest strategic bridges on the road between Aden and Sanaa, to prevent pro-Hadi reinforcements from passing through (Teller Report, 5 November 2019). These moves, combined with pro-Houthi forces reportedly abducting several tribesmen in Ad Dali and Ibb governorate after they refused to be recruited for the Houthi war effort, seem to indicate that the Houthis are preparing for major clashes. Meanwhile, pro-Houthi forces also fired a number of ballistic missiles and drones in Al Mokha district in Taizz governorate, which hit a National Resistance Forces weapons depot, reportedly killing a number of fighters and civilians. The attack forced a Médecins Sans Frontières (MSF) hospital to close.

Meanwhile, in Syria, Syrian Democratic Forces (QSD) fighters retook a number of villages and positions in the Ras Al Ain and Ein Issa areas in Al Hasakeh and Raqqa provinces, respectively. The QSD advanced despite wavering support from Syrian government forces, who withdrew from positions in the Abu Raysan, Al Hasakeh area after suffering losses in clashes with Turkish and pro-Turkish forces. Despite the continued territorial exchange, the Sochi-ceasefire negotiated by Russia between Kurdish forces, including QSD, and Turkish forces largely held (BBC, 23 October 2019). Joint Russian-Turkish patrols were carried out along the frontlines in northeastern Syria, which provoked demonstrations from residents who threw stones at the patrols in a number of villages. Concurrently, American military forces sent military vehicles and logistics to their base in the Ain Al Arab (Kobane) in northern Aleppo province, signaling their intention to maintain a ground presence in Syria.

In the northwest of the country, regime and loyalist militia forces renewed their push into the Kabani area in the Jabal Al Akrad mountains in northeastern Lattakia province. The aim of the operation is to secure Hmeimem airbase, the headquarters for Russian forces in the country, from attacks originating in the Jabal Al Akrad mountains. In neighboring Idleb province, unrest against the Hayat Tahrir Al Sham (HTS) and the Syrian Salvation Government boiled over as residents of the town of Kafr Takharim kicked out both groups. This prompted HTS to retaliate by launching an armed siege on the town. In response, demonstrations were held across Idleb province to protest the siege and demand the expulsion of HTS and Salvation Government forces.

Furthermore, a week after the death of Al Baghdadi and the Al Muhajir, the spokesman of IS, images were widely circulated of the various worldwide IS affiliates pledging their allegiance to the group and its new leader, Abu Ibrahim Al Hashemi Al Qurayshi. During this time, IS activity dropped in both Syria and Iraq as the group scrambles to portray a united front and a reborn version of IS under new leadership.

At the same time in Iraq, the general population is occupied with the demonstrations and violence that are gripping the country and that have reportedly killed over 300 people (ACLED, 23 October 2019). The demonstrations have been ongoing since 1 October against corruption, unemployment and lacking public services. They are also opposed to Iranian intervention in Iraq. Mass demonstrations escalated last week, with demonstrators calling for civil disobedience and strikes as their only recourse to pressure the government to appease them (Reuters, 6 November 2019). Several government offices were shut down and access to the southern Nassiriya oil refinery was also restricted. All roads leading to Iraq’s main port, Umm Qasr near Basra, were blocked. Operations at the port — which receives most of Iraq’s imports of grain, vegetable oils and sugar — have been at a complete standstill for the last week (Reuters, 6 November 2019). The economic impact of the port’s closure is too serious for its closure to continue much longer. However, whether this will be enough to push the government to make concrete concessions, if there are any to be made, is yet to be seen.

In Lebanon, large and widespread demonstrations for government accountability and against Lebanon’s political elite continued for the third week. Despite the resignation of Prime Minister Hariri on 29 October, demonstrations have continued, calling for more resignations and for the cabinet to be replaced by independent experts (Al Jazeera, 13 November 2019).  Clashes between demonstrators and citizens increased, as citizens became more frustrated by the roads blocked during demonstrations. Students took on a larger role in the demonstrations by the end of the week. In Kuwait and Israel, protests were also held against corruption. 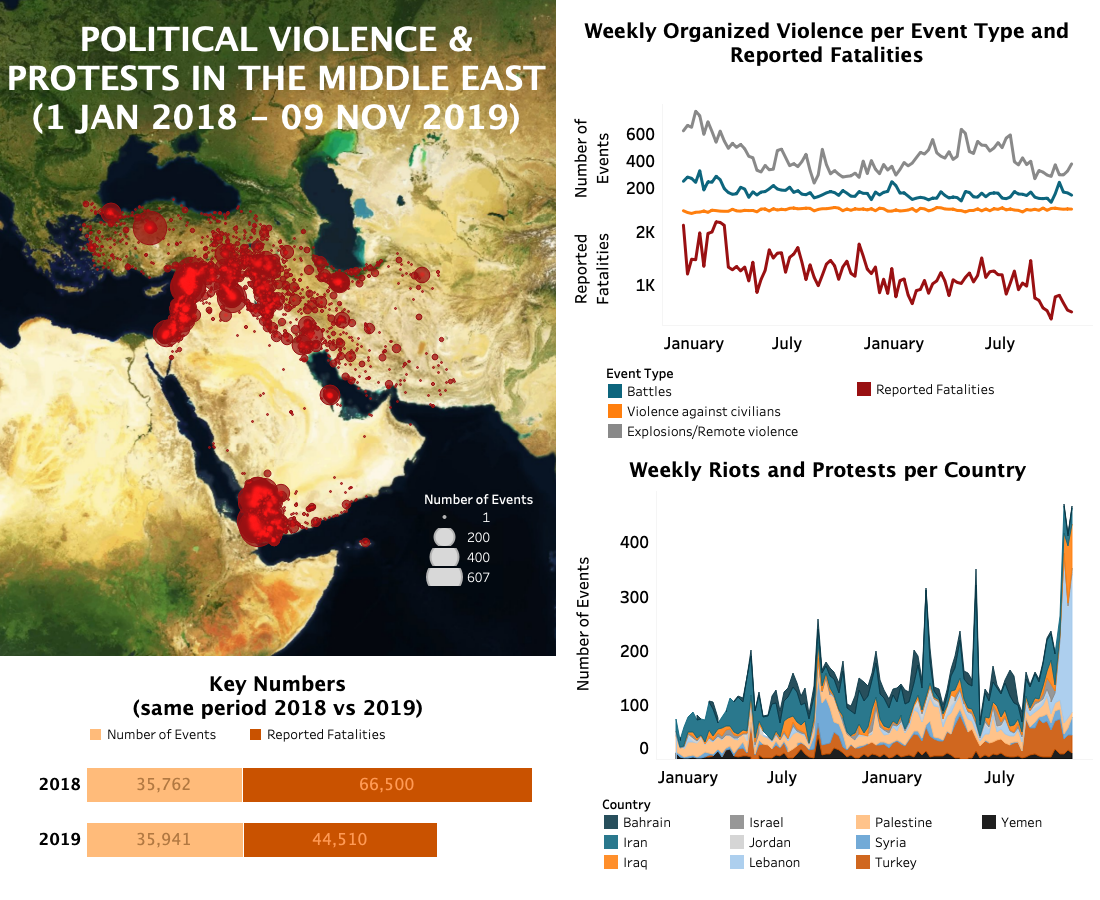