This week, Africa experienced a significantly high number of attacks on a whole, and the violence was distributed across the continent including the typical hot spots of Somalia, the Democratic Republic of Congo (DRC), and Nigeria, but also the continued troubles in Ethiopia and Burundi. Over 600 people are estimated and reported to have died in political violence across the continent last week.

In Ethiopia, political violence continued, largely drawn on ethnic lines. At least three university students were murdered during clashes in Woldia University in Amhara and in Dembi Dollo University in Oromia. Both communities are pitted against each other, as the Oromo seek better accommodation as the largest group in the state, and in continued fallout from the attempted coup by Amhara Nationalists earlier this year.

In Nigeria, tensions between the APC and PDP increased this week ahead of governorship elections in Kogi and Bayela states. In Nembe town, militias of both parties clashed at a PDP rally resulting in one death and several wounded supporters. On election day, six people were killed at polling units in Lokoja, Opolo and Abocho. Several other polling units reported attacks on journalists and voters.

In Burundi, RED-TABARA and FOREBU coalition continue to clash with state forces and Imbonerakure in the northwest of the country. Violence against CNL supporters by CNDD-FDD and clashes between the two parties continues, highlighted by the rape and killing of a CNL party leader who led the women’s political wing. Lesotho also experienced the killing of a political party leader when the head of the Democratic Congress was killed in her home.

In the Central African Republic (CAR), several raids were carried out by rebel groups against aid facilities, in ongoing violence and looting against aid workers.

In Somalia, on 12 November, Al Shabaab killed Abdulle Hassan Haji, the head of Cadayaga village and his deputy (Ali Qoje Hassan) in Cadaya. There has been a sharp increase of attacks by Al Shabaab against the Somali military, government officials, AMISOM and civilians; this continues as a major battle took place in Cadadle between Al Shabab and AMISOM over the weekend. There are growing reports about a new armed, organized group called Awale/Awdal that has been active in the SELAL regions: they demand that all foreigners leave Somaliland.

In South Sudan, several targeted attacks and clashes occurred this week, including a cattle raid in the disputed Western Lakes state (killing three), and a clash between an NSS officer and police in the disputed Gok state (which killed two police). In Sudan, numerous instances of violence against farmers occurring in several parts of North Darfur state, with much of the violence coming from armed pastoralists. This represents a considerable increase in such events in the area.

In Rwanda and the DRC, on 9 November, Rwandan FDLR leader Musabimana Juvenal was killed in North Kivu in the DRC; the second major Rwandan rebel leader to be killed in the DRC over the past two months. The attack may result in a heightened risk of retaliation against the Rwandan army or civilians by FDLR or affiliates.

In Guinea, demonstrations erupted in several cities throughout the country against a possible revision of Guinean constitution.

There were several attacks by Boko Haram in the Kolofata region of Cameroon, including on attack targeting a military base. Assailants reportedly took away armaments. 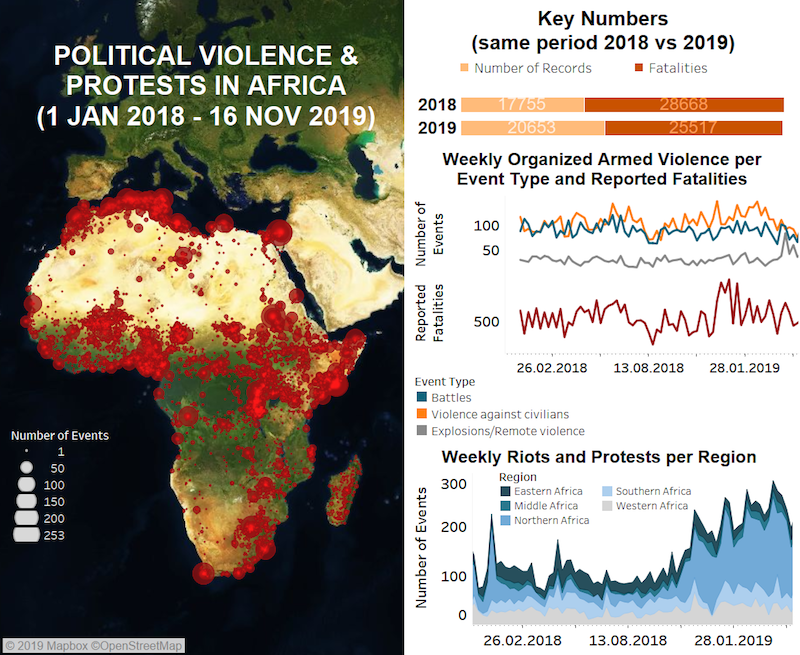