Last week in the Middle East, developments occurred throughout most of the region, including an escalation between Palestinian Islamic Jihad (PIJ) and Israel, as well as the outbreak of major demonstrations in Iran. Other developments were also reported in Syria, Turkey, Iraq, Lebanon, and Yemen.

Israeli forces launched dual assassination attempts on PIJ leadership in Palestine and Syria on Tuesday of last week. In Syria, the airstrike on the capital, Damascus, missed the PIJ leader but reportedly killed two members of his family (The Guardian, 12 November 2019). In Gaza, an Israeli airstrike killed a senior commander of PIJ, Baha Abu Al Ata, and his wife. The attacks were quickly responded to by PIJ who launched upwards of 400 rockets at Israel over the next few days (Jerusalem Post, 19 November 2019). 90% of the rockets headed toward residential areas in Israel were reportedly intercepted by the Iron Dome (The Times of Israel, 16 November 2019). In Gaza, 34 people were reportedly killed including 8 members of one family. Israeli forces later admitted that the house of the family was targeted based on incorrect information (The Times of Israel, 17 November 2019). A ceasefire was agreed to on Thursday and mostly held for the rest of the week (BBC, 14 November 2019).

In Syria, Syrian Democratic Forces (QSD) and Syrian government fighters were able to recapture a few villages from Turkish-led Operation Peace Spring (OPS) fighters in the Ras Al Ain and Tell Abiad areas of Al Hasakeh and Raqqa provinces, respectively. However, OPS forces made larger gains in capturing a number of villages and areas in the Tal Tamer area of Al Hasakeh province, which gave them control over another point along the strategic M4 International Highway (ACLED, 17 October 2019). Protests against the operation and the Turkish handling of recently controlled Syrian territories turned deadly near the town of Ain Al Arab in Aleppo province where Turkish forces fired on protesters who were demonstrating against a joint Turkish-Russian patrol that was passing near the town.

Meanwhile, in Turkey, more mayors from the mainly-Kurdish Peoples’ Democratic Party (HDP) were removed from their offices and replaced with Ankara-appointed trustees. Since they were elected earlier this year, 24 mayors from HDP have been dismissed due to government allegations of their party’s connections with the Kurdish Workers’ Party (PKK) (Aval, 16 November 2019).  Last week, reports of clashes between the PKK and Turkish military dropped with only one event being reported. In northern Iraq, Turkish airstrikes and shelling of reported PKK targets continued steadily. Also in northern Iraq, five Italian Special Force soldiers were seriously injured when a roadside bomb detonated (Time, 10 November 2019).

In the rest of Iraq, Baghdad and the south were the focal points of demonstrations and violence due to clashes with riot police. The demonstrations, which began on 1 October, continued last week with no signs of stopping (ACLED, 23 October 2019). Moreover, the Iraq Teachers’ Union called for another general strike, which led to the closure of schools in Najaf, Al Muthanna, Dhi Qar, Basra, Babel, Karbala and Maysan in an attempt to boost the protests (Musings on Iraq, 13 November 2019). Students en masse joined the protests this week, along with several sections of the health sector.

General Jabbar, the Dean of the Interior Ministry’s Institute for Security and Administrative Development, was kidnapped from central Baghdad, reportedly by a Popular Mobilization Forces (PMF) affiliated group, Asaib Ahl Al-Haq (Al Hurra, 15 November 2019). In recognition of the need to further tighten security, Iraqi authorities last week reinstated a substantial number of military forces and some counter-terrorism forces who were dismissed following the defeat of the Islamic State (IS). This is the first time Iraqi core military forces were reinstated since 2014.

The demonstrations in Lebanon, which have been ongoing for the last month, continued last week at the same scale as weeks prior. Demonstrators are still calling for the resignation of the government which has yet to respond to their demands of a government of independent experts, a new non-sectarian electoral law, and early elections (Al Jazeera, 17 November 2019).

Last week in Yemen, the signing of the ‘Riyadh Agreement’ brought about a relative lull in the fighting in the south. Building on last week’s preparation for fighting, pro-Houthi forces increased the shelling of Hodeidah, and reportedly killed a UAE soldier in Saudi Arabia. Pro-Houthi forces also launched an attack aimed at a pro-Hadi military camp in Marib province, reportedly killing a number of soldiers (The Washington Post, 13 November 2019). Clashes between both pro-Houthi and government forces continued in Ad Dali, Al Jawf, and Taizz governorates, with pro-Hadi forces making marginal territorial gains on the frontlines in these three governorates. 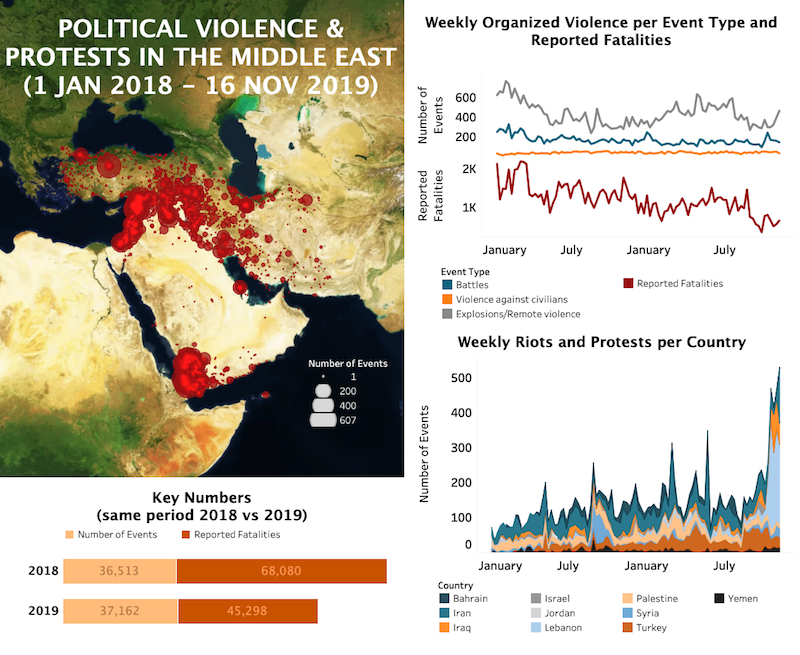