Last week, in Southeast Asia, key developments included: ongoing clashes between the military and ethnic armed groups in Myanmar; separatist violence against civilians in Thailand; continued clashes between state forces and the New People’s Army (NPA) in the Philippines; and labor protests in Cambodia, Malaysia, Indonesia, and Thailand.

Clashes continued in Myanmar between the military and the United League of Arakan/Arakan Army (ULA/AA) in Rakhine state and between the military and the Palaung State Liberation Front/Ta’ang National Liberation Army (PSLF/TNLA) in Shan state. Both groups are members of the Northern Alliance, an alliance of four ethnic armed groups that have not signed the Nationwide Ceasefire Agreement (NCA). The government recently announced that peace talks with the alliance have been postponed for the foreseeable future (Myanmar Times, 14 November 2019).

Meanwhile, in Thailand, suspected separatists reportedly shot and killed two civilians and injured one child in Pattani province. This comes after arrest warrants had been issued following the deadly 5 November attacks by separatists in Yala which left 15 dead (Benar News, 15 November 2019).

Labor protests were reported last week in Cambodia, Malaysia, Indonesia and Thailand. In Cambodia, a two-day protest was held by textile factory workers angry over the firing of two workers for their union activities. Construction contractors in Thailand held a protest against the Department of Highways over unpaid expenses. Oil palm workers demonstrated for higher salaries in Sarawak in Malaysia. As well, protests took place in multiple locations in Indonesia calling for a higher minimum wage as the government set its budget for 2020 (ASEAN Briefing, 14 November 2019).

Finally, a rare protest was reported in Vietnam as police officers who participated in a housing scheme demonstrated when the houses they paid for were not constructed. A planned protest in Laos by pro-democracy activists was canceled as authorities detained the organizers. Critics of the government in Laos are often deemed to be threats to national security and face significant harassment for any political dissent (Human Rights Watch, 16 November 2019). 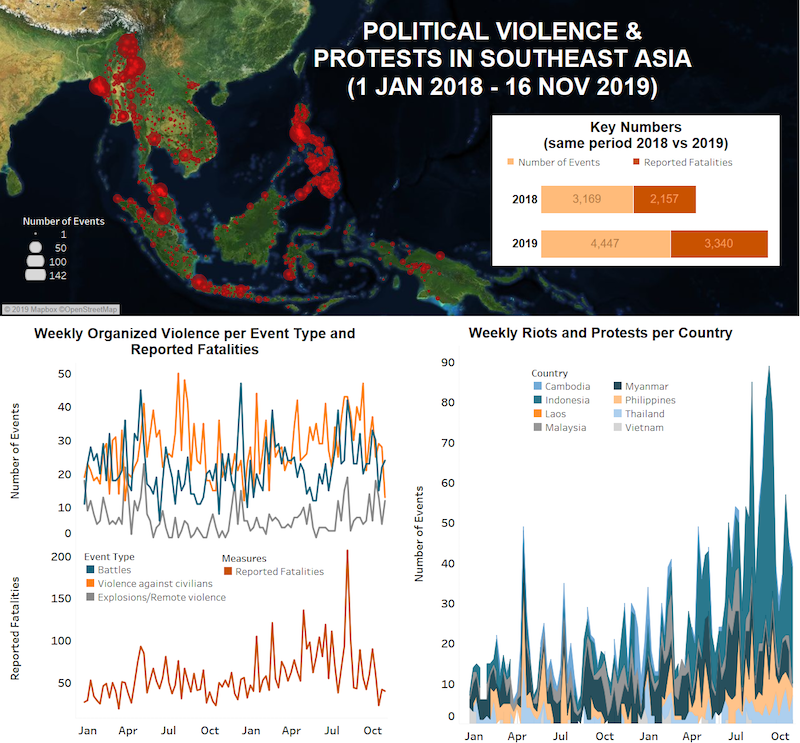