Last week, in Central Asia and the Caucasus, election-related protests spiked in Georgia while organized violence continued along the Line of Contact between Azerbaijan and Armenia. In Afghanistan, the country’s president claimed a significant victory over the Islamic State (IS).

Ahead of the 2020 elections in Georgia, the parliament’s decision to reject a bill that offered an early switch to a proportional electoral system sparked demonstrations all over the country. The bill was expected to transform the mixed electoral system to a proportional one by 2020, before the previous schedule set for 2024. However, on 14 November 2019, the bill failed to receive the needed votes from parliament, despite prior support from the ruling Georgian Dream party. The opposition claim that some Georgian Dream representatives purposefully blocked the bill, either by voting against it outright or abstaining. As the ruling party holds a high number of seats disproportionate to the percentage of votes it received in 2016, the new system could potentially favor underrepresented groups in Georgia’s parliament.

Right after the parliament’s decision, opposition parties and civil rights groups called for protests by gathering in Tbilisi and Batumi, prompting numerous demonstrations all over the county against the delayed reforms. On 18 November 2019, police detained 37 protesters after they attempted to symbolically place padlocks at the entrances to the court and government buildings in Tbilisi. In some cities, supporters of the Georgian Dream party reportedly engaged the demonstrators alongside the police, with clashes breaking out between the two groups.

Protests have consistently called for electoral reforms in Georgia since the summer of 2019, and demonstrations remain ongoing this week.

Meanwhile, in Azerbaijan and Armenia, ceasefire violations remained at a similar level, as the Ministry of Defense of Azerbaijan reported 74 conflict events along the Armenia-Azerbaijan and the Artsakh-Azerbaijan Lines of Contact. In an atypical development, an Armenian soldier was injured by a landmine in the Tavush region of Armenia and another soldier was injured in Stepanakert in the Republic of Artsakh. Although it is unclear if the landmines were planted by Azerbaijan’s military, both regions have been the sites of Azerbaijan-Armenia-Artsakh border clashes, which show no sign of decline during November 2019.

Lastly, in Afghanistan, President Ghani declared that IS had been defeated in the eastern Nangarhar province, the group’s main stronghold where it controlled large swathes of land. The announcement came after both Afghan government officials and the Taliban confirmed that approximately 600 IS fighters and their families had surrendered to Afghan forces in November. Nangarhar’s provincial governor indicated that the remaining IS fighters in the province “are dispersed in small groups, most of whom are on the run or hiding” and that the group’s capacity to carry out massive attacks had been eliminated (RFE/RL, 18 November 2019). ACLED data confirm that IS activity has declined in the province, with fewer than 10 violent events reported in Nangarhar involving suspected IS fighters over the past week (and only 6 with IS as a confirmed actor). US officials have confirmed the group’s collapse in Nangarhar, but caution that IS still maintains a presence in Kunar and some northern provinces, and therefore continues to pose a threat to security in Afghanistan (VOA, 21 November 2019). 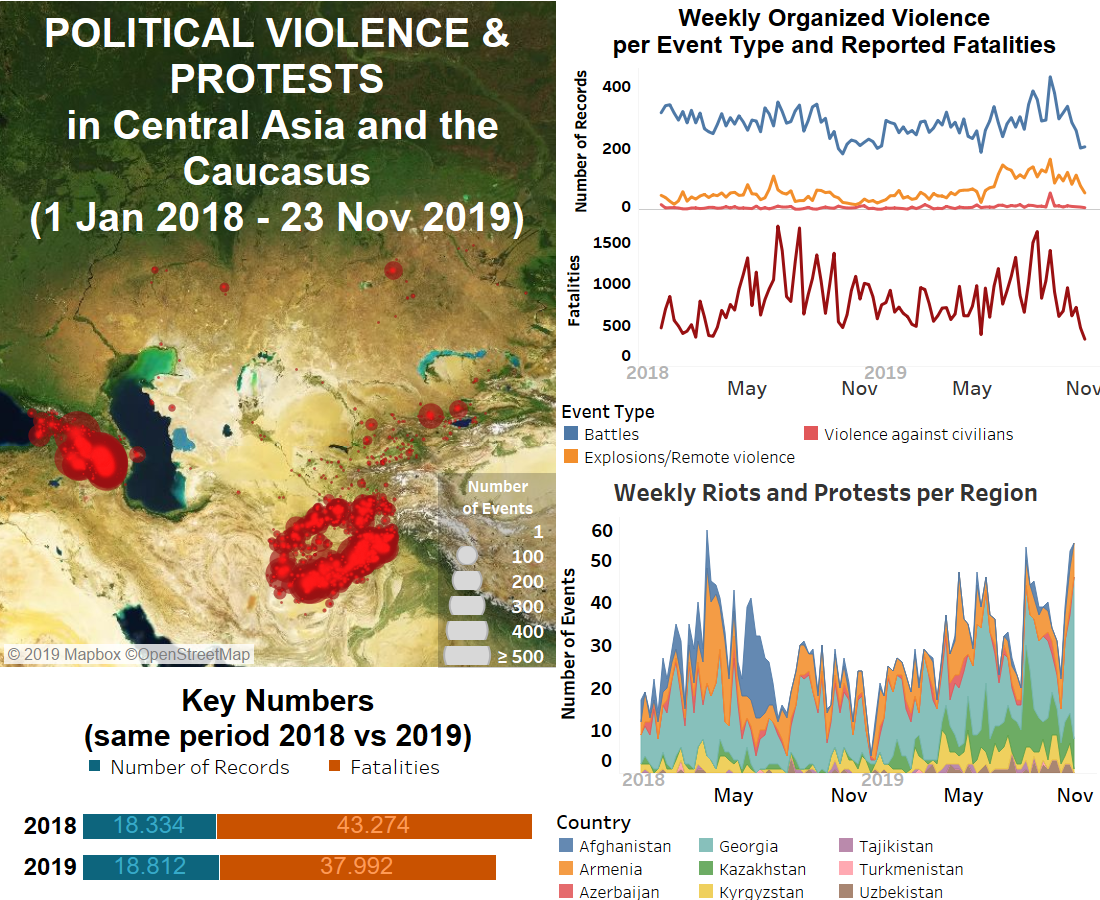