The main highlights from the Middle East last week were the widespread demonstrations in Iran, Iraq, and Lebanon. In Syria, Operation Peace Spring (OPS) continued in the northeast and Israeli airstrikes were reported in Damascus. Important political developments also took place in Israel and in Yemen, where the ‘Riyadh Agreement’ began to go into effect.

In Iran, nationwide demonstrations continued across the country in the first half of last week. Triggered by a sharp hike in fuel prices, the recent demonstrations were extremely violent. It is estimated that more than 400 banks were torched, 180 petrol stations burned downed, 80 shops looted, and dozens of government offices and buses vandalized by demonstrators since the beginning of the demonstrations on 15 November (DW, 20 November 2019). Security forces used lethal force to crush the demonstrations and the internet remained shutdown nationwide until 21 November. ACLED has recorded over 180 fatalities based on reports since 15 November, though the true fatality count is likely to be even higher. (ACLED defers to a conservative fatality estimate; for more on ACLED fatality methodology, see this primer.)

Furthermore, the government has reportedly arrested thousands of people and is accusing some demonstrators of working as agents for Iran’s enemies. The Rouhani administration has pledged that the fuel price increase will fund new subsidies for low-income families, but it is unlikely that this measure alone will remedy the situation (Al Jazeera, 15 November 2019). Frustration over economic conditions is running high among Iranians. According to the Iranian Statistical Center (ISC), the inflation over the last year was 42% compared to the year prior and food prices rose by more than 60% (ISC, 09 November 2019). Since the US abandoned the nuclear deal and re-imposed sanctions in 2018, Iran’s oil exports have collapsed, and the value of the country’s currency has plummeted. Although by the time of this writing unrest in the country has been contained, a fresh wave of demonstrations is likely to be around the corner in the absence of meaningful improvements in the dire economic situation.

In Iraq, the on-going demonstrations in Iraq intensified on 22 and 23 November leaving scores dead in clashes with riot police (ACLED, 23 October 2019). Throughout last week in southern Iraq, demonstrations were reported with some skirmishes with security forces, particularly in Al Rifai district in Thi-Qar province, following the arrest of demonstrators from the area. On 20 November, PM Abdul-Mahdi met with tribal leaders in hopes of gaining their support to end the unrest, but this did little to appease the demonstrators. The meeting was ineffective, especially considering the support lent to the demonstrations by the Shiite religious leadership. Grand Ayatollah Ali Al Sistani reiterated his support for the demonstrations on 22 November and called on the government to swiftly implement reforms (The Arab Weekly, 24 November 2019). Strikes continued throughout the country, with several teacher-led labor unions joining. Schools and government offices remained shutdown in several southern provinces (Reuters, 22 November 2019). Demonstrators also continued blocking major ports such as Umm Qasr and Khor Al Zubair, as well as oil fields in Basra province. Police were able to successfully reopen some of these locations by the end of last week. Access to messaging apps and social media (including Twitter, Facebook and Instagram) were restored after being blocked for 50 days.

In Lebanon, mostly peaceful demonstrations continued throughout the country as the protest movement entered its fifth week. On Wednesday, protesters blocked all entrances to the parliament building to prevent PMs voting on anti-corruption legislation. Demonstrators continue to demand that the government resign. On Friday and Saturday, protesters held alternative Independence Day festivities in the form of mass protests in all major cities of Lebanon. Students continued to play an important role in the demonstrations with daily demonstrations occurring outside the Ministry of Education in Beirut and student participation in many other events.

Meanwhile, in Syria, government and Russian forces increased their artillery and air bombardment campaign of Idleb province, likely in anticipation of another major ground offensive. There were regime and loyalist militia attacks in eastern Idleb province’s countryside with rebel and Islamist fighters managing to fend off the attacks. Russian aircraft and regime artillery began to strike areas in northern Idleb, which had previously been relatively unaffected. One strike hit a camp for internally displaced persons (IDPs) and a women’s hospital in the town of Qah.

In northeast Syria, Turkish and pro-Turkish fighters operating as part of OPS continued to clash with Syrian Democratic Forces (QSD) and Syrian government fighters. Neither side made any major advances in these clashes in the Tal Tamer area of Al Hasakeh province along the M4 international highway and in the Tell Abiad area in Raqqa province near the border with Turkey. Joint Turkish and Russian patrols continued in the Ain Al Arab area of northern Aleppo province and the Ras Al Ain area of Al Hasakeh province along the frontlines with QSD and government forces.

Following the launch of four rockets from Syria toward Israel, on 19 November, Israeli jets struck Iranian Quds Force and pro-Iranian militia targets in and around Damascus, including at Damascus International Airport (BBC, 19 November 2019). Israeli media reported that the rockets were all intercepted and that they were launched by Iran or Iranian proxies in Syria (Times of Israel, 19 November 2019).

On Monday, the US Secretary of State announced that Israeli settlements in East Jerusalem and the West Bank of Palestine are not inconsistent with international law (BBC, 18 November 2019). This is a reversal of the Obama administration’s stance on the topic and is in contradiction with international legal norms, including the positions of the United Nations and European Union. While ACLED has not recorded a Palestinian response yet in the form of violence or unrest, major demonstrations are anticipated in the coming week.

Moreover, on Thursday, the Israeli Attorney General announced that PM Netanyahu will be indicted on corruption charges. This is the first time a sitting Israeli PM has been charged with a crime (Time, 21 November 2019). PM Netanhayu responded with an announcement that he will not resign from his position. The elected parties in the Israeli Parliament (Knesset) have yet to form a coalition: a necessary step in the formation of a government. If this remains the case over the next few weeks, there will likely be a third election in Israel.

Furthermore, in one of the first concrete steps taken as a result of the ‘Riyadh Agreement’, Yemen’s internationally-recognized government returned to the country last week. Local officials and Saudi forces in Aden received Prime Minister Maeen Abdulmalik Saeed, accompanied by five key ministers from the Hadi government, fulfilling one of the main points in the power-sharing deal brokered by Saudi Arabia (AP, 18 November 2019).

Meanwhile, Houthi forces reportedly seized two South Korean boats, along with a Saudi tugboat, near the Red Sea a few miles off Uqban island, west of Sanaa, intensifying tensions between them and Saudi Arabia (Reuters, 18 November 2019). The number of Saudi-led coalition airstrikes have fallen, with only about 35 strikes reported in Sadah and Hajjah governorates, and one reported inside Saudi Arabia. However, fighting between Houthi forces and pro-government forces intensified once again last week in Hodeidah governorate, and to a lesser extent in Ad Dali and Taizz governorates. 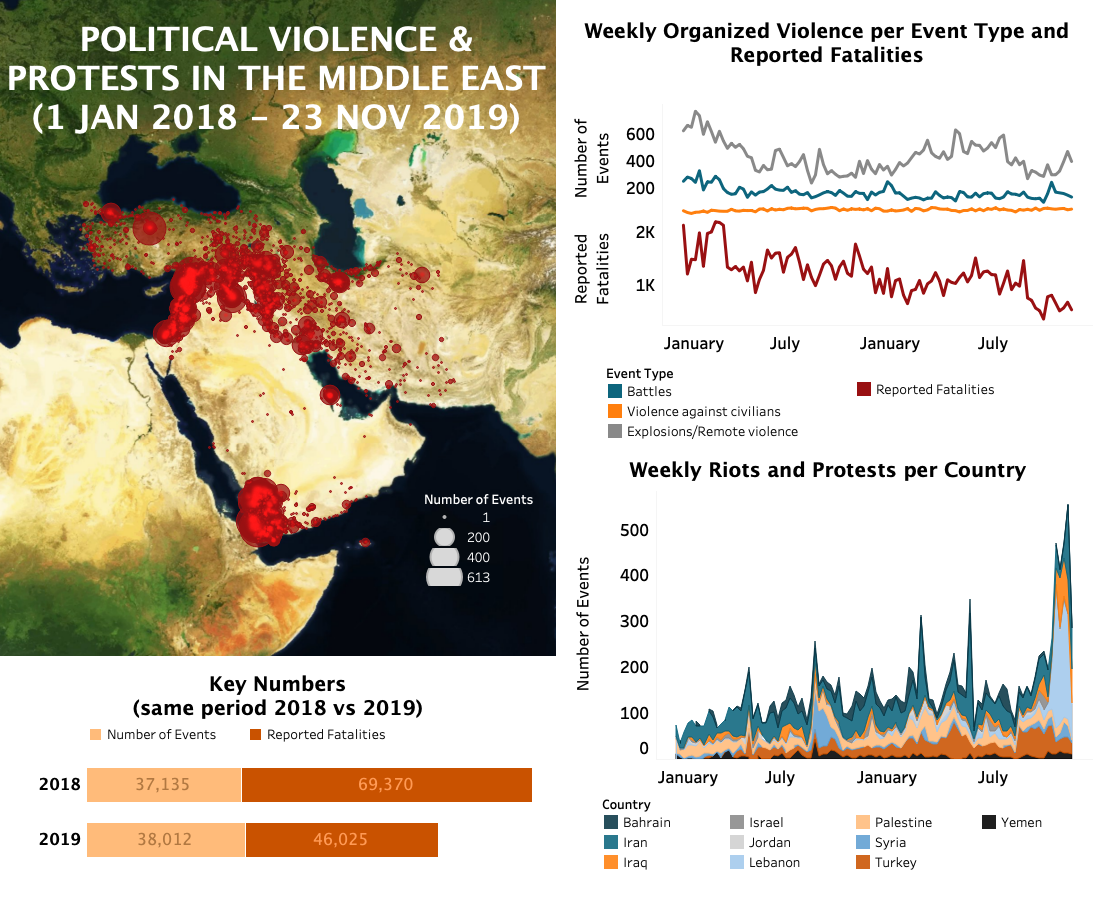