Last week in Central Asia and the Caucasus, main developments included demonstration events over a large-scale corruption case in Kyrgyzstan as well as access to energy supplies in Uzbekistan. Ceasefire violations continued along the Armenia-Azerbaijan border, while in Afghanistan, the US attempted to initiate ceasefire negotiations between the Taliban and the Afghan government.

In Afghanistan, clashes between pro-government forces and the Taliban continued on a similar level compared to the week prior. However, there is renewed hope for a peace deal to end the 18-year war in Afghanistan: US President Trump made a surprise Thanksgiving Day visit to American troops in the country on 28 November, where he announced that the United States (US) and the Taliban have reengaged in peace talks. Furthermore, Trump said that the US now demands a ceasefire from the Taliban, which marks a shift in the US negotiating position. Although the Afghan government has long called for a ceasefire, there are no signs that the Taliban – who now control more territory than at any time since 2001 – are willing to accept this demand. Nevertheless, the Taliban confirmed that meetings between US and Taliban officials have been taking place since last week in Doha, Qatar, indicating their readiness to resume formal talks (Reuters, 29 November 2019).

While there is cautious optimism over peace talks, key issues – including the Taliban’s refusal to engage in direct talks with the Afghan government – remain to be resolved. A strong election victory for Afghan President Ghani could have strengthened his hand to play a more significant role in negotiations with the Taliban. But with the results of the September election still being counted, the ongoing limbo in Afghan politics has added to the uncertainty in the country. Last week, thousands of protesters, mainly supporters of Afghanistan’s Chief Executive Officer and presidential candidate Abdullah Abdullah, took to the streets in Kabul against alleged voter fraud. Protesters chanted slogans against the country’s independent election commission, alleging that it was recounting 300,000 invalid ballots to help President Ghani win a second term. The controversy complicates US efforts to secure a negotiated end to Afghanistan’s hostilities (VOA, 29 November 2019).

Meanwhile, in Kyrgyzstan, one of the largest protest actions of 2019 took place in Bishkek on 25 November, after the revelation of a large money-laundering case involving Raiymbek Matraimov, a former officer in the State Customs Service. The scheme was brought to public attention by an Uyghur businessman from China, Aierken Saimaiti, who shared the details of the scheme with the press (RFERL, 21 November 2019). On 10 November, he was killed in Istanbul, Turkey, outing the case and prompting the arrest of Kyrgyzstan’s Former Istanbul Envoy as a suspect in the murder. The public outrage on 25 November was unprecedented in terms of reaction to corruption in Kyrgyzstan, where about a quarter of the population lives below the poverty line (National Statistical Committee of the Kyrgyz Republic, 2018).

In Uzbekistan, protests took place in the Syrdarya and Andizhan regions in response to the nationwide power supply and natural gas emergency. After a series of debated government plans to renew and extend energy infrastructure, citizens struggle to access fuel and electricity in Uzbekistan, despite the country ranking 20th in the world in gas production (IWPR, 5 February 2019). During the past week, the residents of Shortanbay town in Karakalpak region blocked a road demanding proper supply of natural gas. Following this, on November 29, Kushtepa village residents in Andizhan region also blocked a road in protest of the power cut caused by the authorities installing a defective power transmission. On the same day, Uzbekistan’s Prime Minister admitted that the government mishandled the issue and called the ongoing problems in the energy sector a “shameful situation” (Gazeta.uz, 29 November 2019).

*Correction: This piece has been updated to accurately reflect Raiymbek Matraimov’s position. 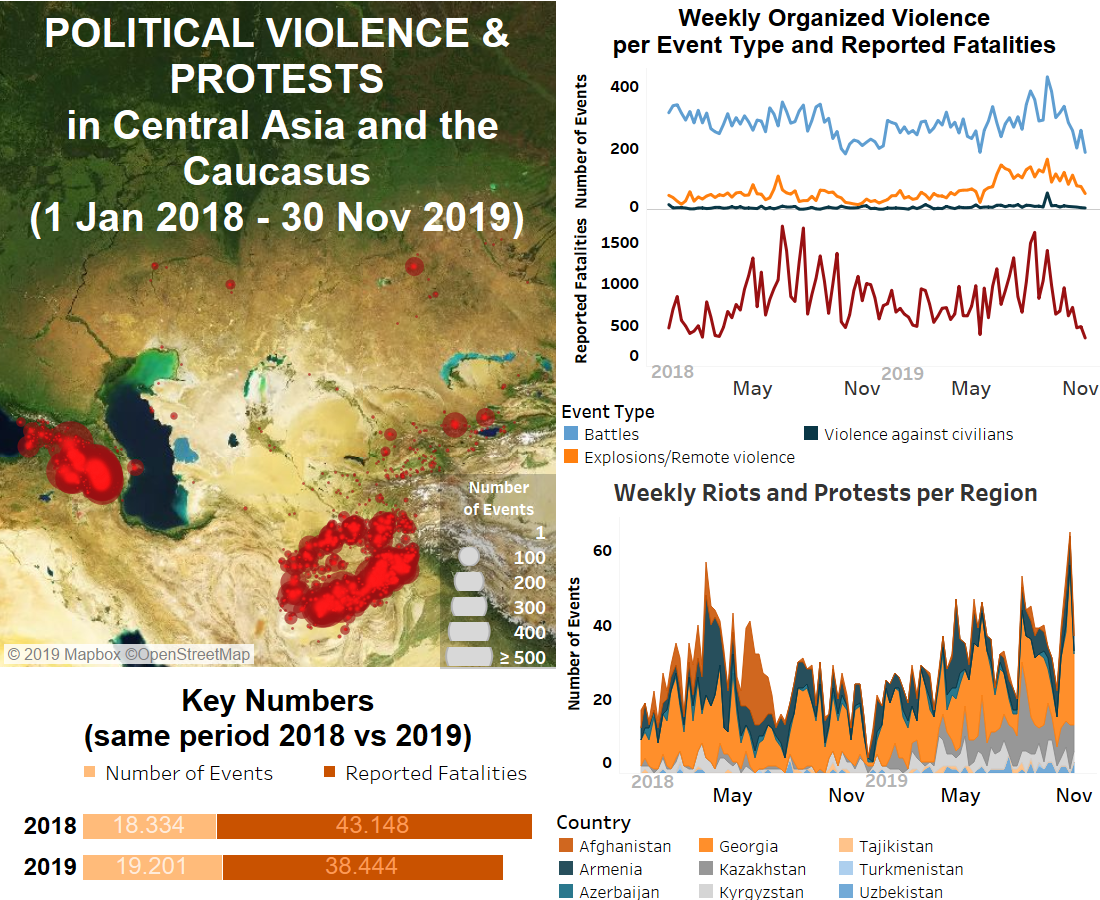