Last week, demonstrations continued in the Balkans, Southeastern Europe, and Eastern Europe over a wide range of issues. Notable developments were the restart of anti-government demonstrations, as well as demonstrations supporting the government, in Serbia; and protests in Belarus against plans of integrating the country with Russia.

In Serbia, the “1 of 5 Million” anti-government protests entered their second year (N1, 2 December 2019). After peaking in early 2019 and nearly vanishing over the summer, protests recently picked up, spurred by several fraud and corruption scandals involving government officials. In response to the resurging anti-government protests, the ruling Serbian Progressive Party (SNS) restarted its own protests against the opposition (N1, 4 December 2019).

In Greece, violence and demonstration events spiked over the eleventh anniversary of the killing of teenager Alexandros Grigoropoulos by police in Exarchia, Athens. While large crowds held peaceful protest marches, smaller groups of anarchists and unidentified rioters clashed with police for several days (Ekathimerini, 6 December 2019).

In Belarus, protesters, including opposition members, students and pensioners, rallied in Minsk against the rumored plans on the integration of Belarus with Russia. The police did not intervene in the unsanctioned protest, suggesting that these anti-integration protests are allowed to continue to provide President Lukashenka cover to push back against Moscow’s plans on integration (RFE/RL, 7 December 2019).

In Russia, the Communist Party of the Russian Federation (KPRF) continued its small-scale protests in support of two high-ranking KPRF functionaries. In addition, protests over waste management reform continued. Protests are concentrated in Arkhangelsk region, where much of the waste will be processed from the large cities in the western part of the country (Dovod, 2 December 2019).

In Ukraine, protests over corruption and the liberalization of the land market continued throughout the country, with similar event numbers to weeks prior. Demonstration activity in Ukraine has been elevated since September of this year, doubling on average compared to the relatively calm first half of the year. In the Donbass region, fighting between Ukrainian government forces and separatist rebels continued at similar levels to weeks prior, with 118 armed clashes and 107 shelling incidents resulting in seven reported fatalities. 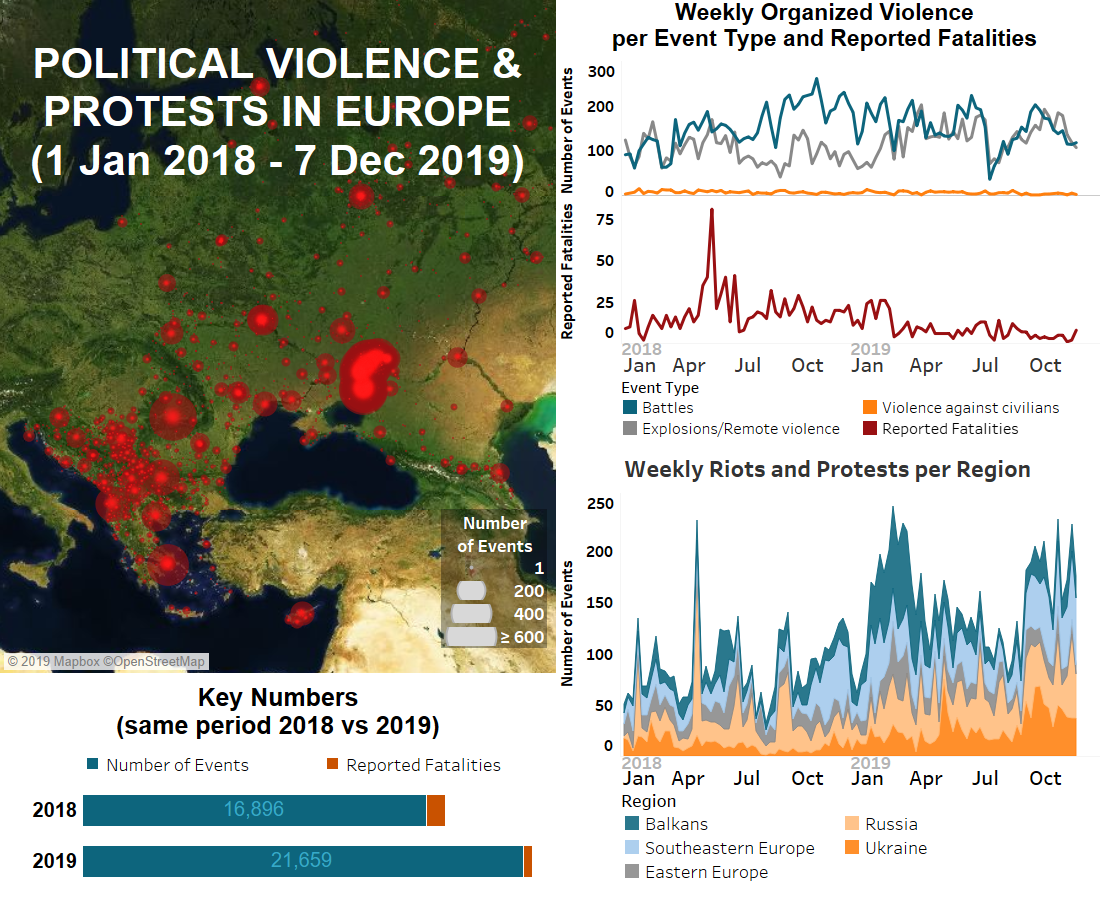