Last week in Central Asia and the Caucasus, notable developments included a Taliban attack targeting a US base in Afghanistan, anti-China and anti-government demonstrations in Kazakhstan, and continued ceasefire violations along the Armenia-Azerbaijan border.

In Afghanistan, Taliban militants carried out a major attack near Bagram Airfield, the largest American military base in the country. The assault began when two suicide bombers targeted a medical facility being built adjacent to the airfield, reportedly killing two civilians and wounding 70. Though the Taliban claimed its fighters then entered the military base, a spokesman for US forces in Afghanistan said the “airfield was not in danger,” and that the attackers barricaded themselves inside the hospital building (CBS, 11 December 2019). After a multi-hour gun battle and a series of US airstrikes, all attackers were reported killed.

Newly-resumed peace talks between the US and the Taliban were suspended following the attack. Rejecting suggestions that the incident seriously harmed the negotiation process, a Taliban spokesman claimed that the talks were paused in a “good and positive” atmosphere and will shortly resume again after internal consultations (VOA, 12 December 2019). The US negotiating team has been urging the Taliban to reduce violence or to declare a ceasefire. Last week’s assault on Bagram was likely a message to the US that violence will continue until a troop withdrawal agreement is reached. However, some analysts suggest the attack might have been a sign of disagreement among the Taliban’s political leadership and its military field commanders over the peace talks (Pajhwok, 12 December 2019).

In Kazakhstan, demonstrations took place in Shymkent and Oskemen cities against the deportation of two ethnic Kazakhs who illegally crossed the border from China’s northwestern region of Xinjiang. The demonstrators raised allegations of mistreatment and torture in China’s disputed Xinjiang “vocational camps,” and underscored growing anti-China sentiments in Kazakhstan. Since September 2019, multiple protests have been reported in the country against the confinement of Muslim indigenous ethnic groups in Xinjiang as well as China’s economic expansion into Central Asia (Washington Post, 16 October 2019). The effect of this economic leverage on asylum applications from the Xinjiang camps was also raised by a US State Department delegation last week, following a meeting with the Foreign Minister of Kazakhstan regarding American strategy in Central Asia. According to a senior State Department official, the new strategy will seek to both increase “political, economic, and military engagement” with Central Asian countries and counterbalance China’s influence in the region (RFE/RL, 14 December 2019).

Moreover, two significant protest events against political repression took place earlier this week, in the cities of Nur-Sultan and Almaty, with Kazakh security forces detaining dozens of protesters. Reports indicate that a number of activists were jailed ahead of these expected protests on account of undisclosed investigations, likely in an attempt to suppress the demonstrations (TAG News Agency, 13 December 2019).

Throughout 2019, Kazakhstan has registered by far the highest number of demonstration events in Central Asia, followed by Kyrgyzstan, which has experienced a wave of anti-corruption protests. 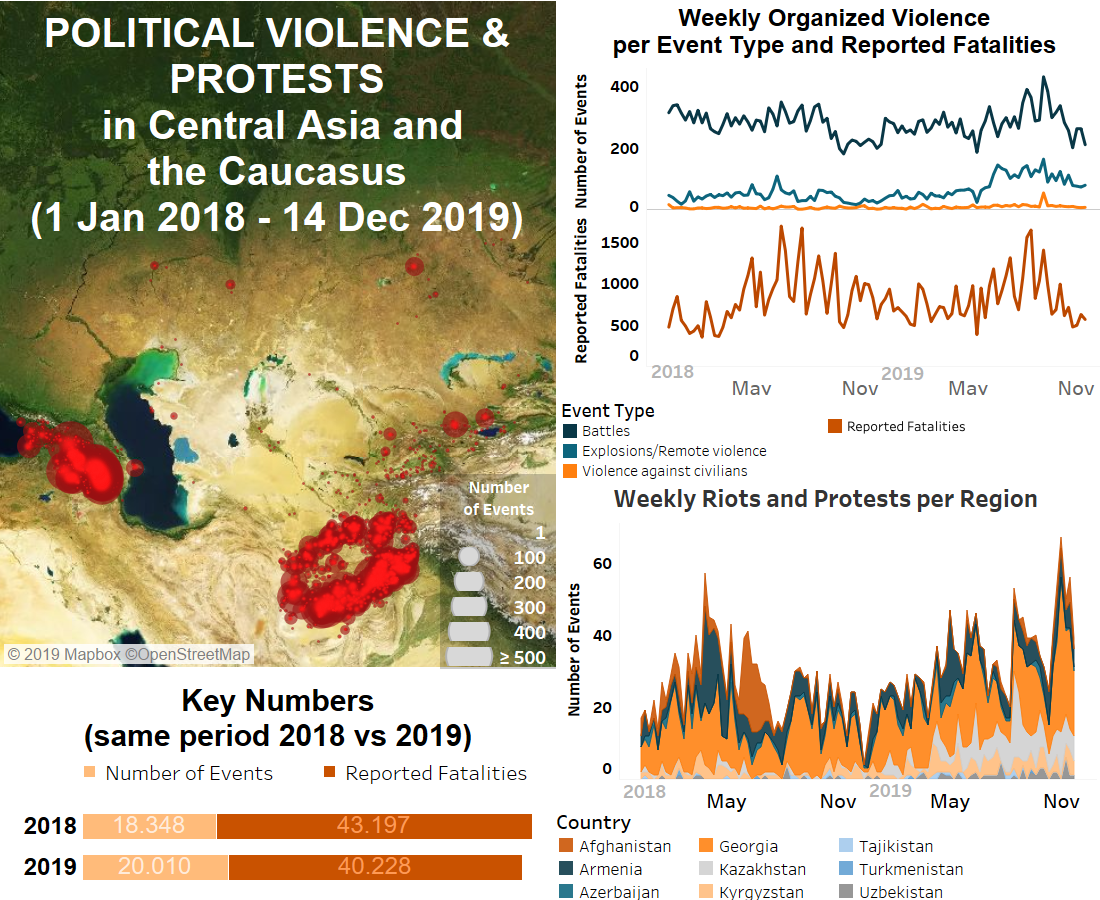