Last week, in Southeast Asia, key developments included: the largest demonstration in Thailand since the 2014 military coup; rallies across Myanmar in support of Daw Aung San Suu Kyi; continued clashes between state forces and communist rebels in the Philippines; a battle between an Islamist armed group and state forces in Indonesia; and region-wide demonstrations on International Human Rights Day.

The largest demonstration since the military seized power in 2014 occurred in Thailand as the Future Forward Party (FFP) led a rally in Bangkok against the military’s ongoing involvement in politics (Al Jazeera, 14 December 2019). Recently, the Election Commission has sought to dissolve the FFP. While the commission claims that the party committed campaign finance violations, the leader of the FFP, Thanathorn Juangroongruangkit, has argued the charges are politically motivated. The FFP has indicated they will protest again in January (The ASEAN Post, 17 December 2019).

Dozens of rallies were held across Myanmar in support of the State Counsellor, Daw Aung San Suu Kyi, as she represented Myanmar before the International Court of Justice over the charge of genocide against the Rohingya. In contrast, there was also a small protest by youth activists against the denial of genocide. Meanwhile, deadly fighting continues in northern Rakhine state and southern Chin state between the military and the Arakan Army (AA). Civilians continue to be killed in the conflict. Last week, a woman and child were reportedly killed by artillery shelling in Paletwa township in Chin state. A recent meeting of the government and the Northern Alliance, of which the AA is part, failed to make any progress towards stopping the ongoing fighting (Irrawaddy, 16 December 2019).

In the Philippines, clashes between the New People’s Army (NPA) and Philippine state forces continued. Two civilians were killed in an attack by the NPA that targeted a police officer. After President Duterte announced that martial law would not be extended in the Mindanao region (Associated Press, 10 December 2019), no clashes were reported last week between state forces and armed Islamist groups.

Meanwhile, in Indonesia, the Islamist group Mujahidin Indonesia Timur (MIT) clashed with Indonesian state forces in Central Sulawesi, which resulted in the reported death of one policeman. Such clashes with the MIT were last reported in March of this year. Elsewhere in Indonesia, several demonstrations were held against corruption on International Anti-Corruption Day (9 December). Demonstrations over corruption issues have been more frequent after the recent legislation to weaken the anti-corruption body, the Corruption Eradication Commission (KPK), was supported by the president.

As a Catholic group in Vietnam was setting up a Christmas nativity scene on disputed land in Ho Chi Minh City, the police intervened and assaulted several people. Disputes over land have often led to disorder in the country (Radio Free Asia, 9 December 2019).

Finally, protests were reported across Southeast Asia on International Human Rights Day (10 December) in Indonesia, Myanmar, and the Philippines. 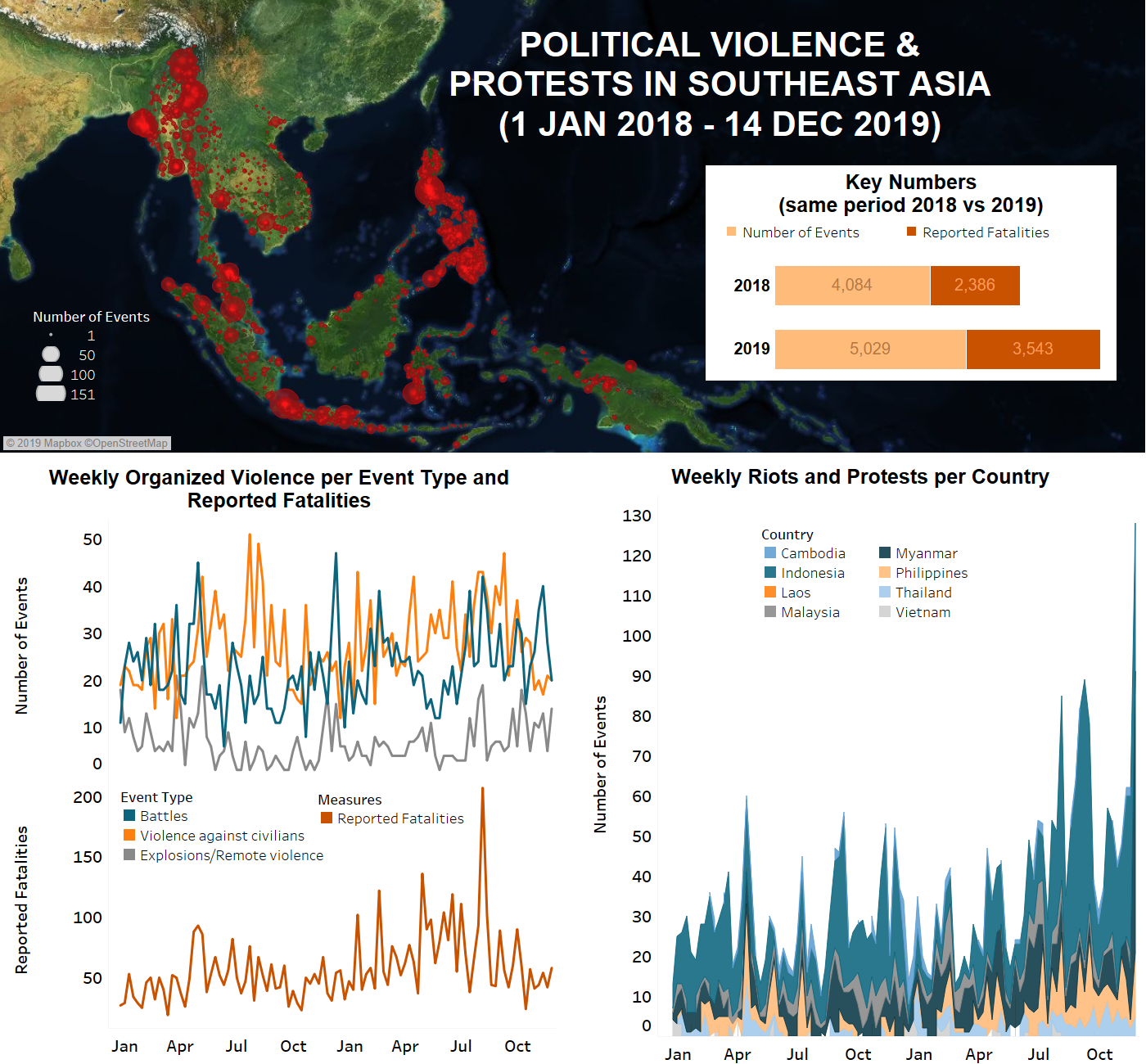