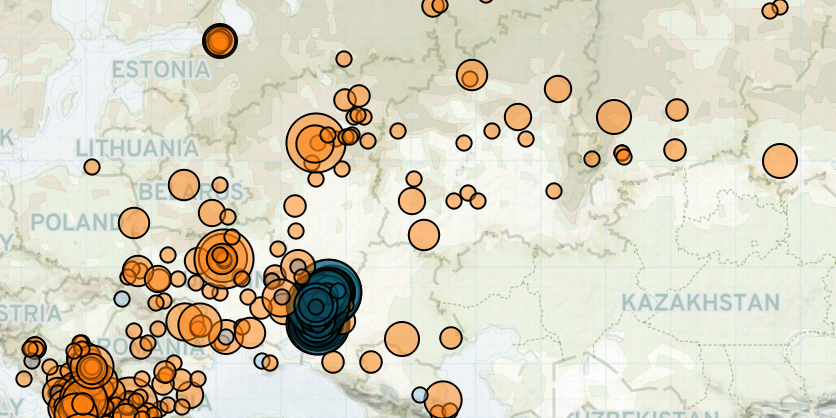 Key developments in the Balkans last week were the threat of secession of Republika Srpska from Bosnia and Herzegovina and the dissolution of the Parliament of North Macedonia. In Southeastern Europe, demonstrations in Greece increased over pension reforms. Eastern Europe remained relatively quiet. In Russia, protests were held over the Network case, and in Ukraine, fighting in the Donbass region increased sharply.

In Bosnia and Herzegovina, political tensions flared after Republika Srpska lawmakers, as well as the Serb member of Bosnia’s three-headed Presidency, threatened the secession of Republika Srpska from Bosnia and Herzegovina with a 60-day ultimatum. The threat was triggered by a ruling from the Constitutional Court of Bosnia, in a dispute over the ownership of agricultural land, stating that the land should default to the Bosnian state instead of the Republika Srpska (RFE/RL, 18 February 2020). While actual secession is unlikely, the move increases political tensions and risks legislative deadlock within the three-months old government.

In Montenegro, protests over the controversial Religious Freedom Law continued for the ninth week, with over a dozen protests held across the country. The Serbian Orthodox Church claims that the law unfairly targets its possessions.

The Parliament of North Macedonia dissolved itself and set the date for early elections for 12 April. The dissolution followed President Zaev’s resignation last month, after failing to secure the start of negotiations on EU-accession from EU-leaders (Reuters, 16 February 2020). The ruling Social Democratic Union of Macedonia (SDSM) organized a large protest march in Skopje in support of judicial reforms, a key EU concern, to demonstrate the party’s continued commitment to the Euro-Atlantic course ahead of the elections (Balkan Insight, 16 February 2020).

In Greece, thousands of workers and union members protested in central Athens against pension reforms and the government’s proposed legislation on social insurance, with dozens more protests held across cities in Greece (National Herald, 19 February 2020).

In Russia, over a dozen small-scale protests were held in support of the antifascists and anarchists prosecuted in the controversial and high-profile Network [Set] case (Meduza, 9 February 2020; RFE/RL, 26 February 2020). Protests over ongoing issues such as waste management and the proposed constitutional amendments continued similar to weeks prior.

In Ukraine, fear over the coronavirus COVID-19 sparked demonstrations in several cities where medical facilities are used to quarantine Ukrainian evacuees from China (The Guardian, 20 February 2020). In the Donbass region, fighting between Ukrainian government forces and separatist rebels intensified compared to the two weeks prior, with 144 armed clashes and 166 shelling incidents resulting in two reported fatalities. Both sides accused each other of causing the flareup (Moscow Times, 18 February 2020)