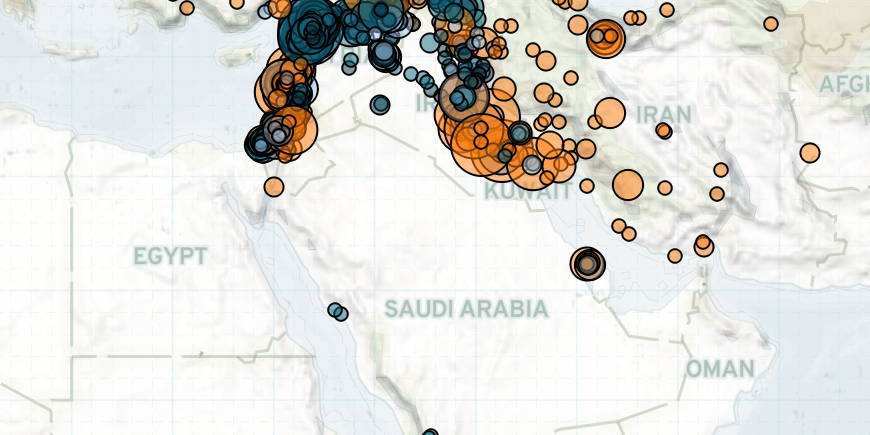 Last week in the Middle East, key developments include: unrest around a major outbreak of the coronavirus in Iran and a majority win by the principlist camp in the Iranian parliamentary elections; a series of bombings in Baghdad amidst ongoing demonstrations in Iraq; and major fighting in Syria and Yemen.

Last week in Iran, the principlist camp made sweeping gains during the country’s parliamentary elections, with hardliner and conservative candidates securing at least 219 of the 290 seats, including all 30 seats in Tehran. The election was marked by the lowest voter turnout since the 1979 Revolution: nationwide turnout stood at about 42%, down from previous parliamentary elections when it exceeded 60% (Al Jazeera, 23 February 2020). In Tehran, the turnout was just 25% (Al Jazeera, 23 February 2020). Supreme Leader Ali Khamenei blamed the low turnout on Iran’s enemies for exaggerating the threat of the reported coronavirus outbreak. However, it is more likely an indication of general discontent with the country’s rulers and the poor state of the economy (Reuters, 23 February 2020). ACLED’s special report on Ten Conflicts to Worry About in 2020 suggested that the Iranian public’s support for the government might be clarified following the elections, as there were a number of push and pull factors related to participation. Low voter turnout signals high dissatisfaction with the system of governance, which indicates that not much has changed for Iranians since last November’s fuel price demonstrations. The violent crackdown around those demonstrations and the accidental downing of the Ukrainian passenger plane by the Islamic Revolutionary Guards Corps (IRGC) in January are believed to have exacerbated public dissatisfaction with the regime (ACLED, 23 January 2020). Furthermore, Iran’s Guardian Council disqualified thousands of reformist and pragmatic coalition candidates from running in the elections, limiting the options available to many would-be voters. The new makeup of the parliament politically weakens President Hassan Rouhani, a moderate, and will likely further complicate any potential attempts to engage with the United States. It may also bolster the principlists’ chances for victory in the 2021 presidential election.

Beyond the elections, multiple protests were reported in Iran over the government’s response to the outbreak of coronavirus. There have been over 100 positive cases of coronavirus in Iran, with at least 19 deaths from the virus so far, making the mortality rate of the virus in Iran higher than in any other country in the world (NBC News, 25 February 2020). The country faces a shortage of medical supplies, and authorities began designating hospitals as quarantine areas. Fears over the outbreak have spilled over into neighboring Iraq, which shut down its border with Iran amid reported protests over quarantines at Iraqi hospitals.

Last week in Iraq began with several rockets landing inside Baghdad’s Green Zone, reportedly striking an Iraqi base hosting US troops and other coalition forces, as well as a logistics base operated by the Popular Mobilization Forces (PMF) (Al Jazeera, 16 February 2020). The attack caused only minor material damage. Baghdad was also hit with a chain of bomb attacks across various districts of the city, which reportedly left more than a dozen civilian injured (Basnews, 23 February 2020). This is the second attack of its kind in February. While these events may have been conducted by the Islamic State (IS), given that IED attacks are in line with IS activity, no one has yet to claim responsibility.

Meanwhile, IS carried out a number of prominent attacks targeting civilians and Iraqi security forces during the week. IS militants attacked Jaghmaghah village in Kirkuk province, reportedly killing four civilians and injuring three others. In Diyala province, IS attacked police and military forces, resulting in three reported fatalities. These attacks all occurred in disputed areas between Kurdish and Iraqi forces, where there is a security void in which IS can more easily operate (Rudaw, 12 February 2020). IS militants have continuously exploited these voids to launch attacks in recent months. If these areas are not secured, they could become hubs for IS sleeper cells.

In southern Iraq, students led demonstrations in support of the popular movement that began in October 2019 (ACLED, 23 October 2019). Meanwhile, clashes were reported between demonstrators and riot police in Baghdad, with unidentified armed groups using hunting rifles loaded with birdshot against both demonstrators and security forces. This resulted in the death of one demonstrator and the injury of several security personnel (Basnews, 23 February 2020).

Turkish forces continued to launch airstrikes and clashed with the Kurdistan Workers Party (PKK) in northern Iraq last week. In Turkey, these events declined, with only one Turkish airstrike reported against the PKK. Meanwhile, Kurdish local vengeance units of the Peoples’ United Revolutionary Movement (HBDH) and the Civil Protection Units (YPS) continued their string of property destruction and grenade attacks in Istanbul and Diyarbakir provinces. The attacks mainly targeted Turkish police and shops or factories whose owners are allegedly tied to the ruling Justice and Development Party (AKP) of President Erdogan. Also, at least 100 people, including active military personnel, were arrested last week due to suspected links to the Gulen movement, which authorities accuse of orchestrating the attempted military coup in 2016. These arrests have been consistent since the attempted coup in 2016, but this is the largest number of arrests in over a month.

In Syria, regime and allied forces secured Aleppo city surroundings and made significant advances in the western Aleppo countryside. Meanwhile, amid the ongoing regime and Russian campaign, clashes with opposition and Islamist factions rendered two hospitals out of service in the Greater Idleb area with 12 civilian fatalities last week. Turkish President Erdogan announced on 25 February that a Russian delegation would arrive the following day to resume talks aimed at easing tensions in the area, but no consensus was reached for a meeting next month between the leaders of France, German, Russia, and Turkey (Hurriyet Daily, 25 February 2020).

In Yemen, major clashes between pro-Houthi and anti-Houthi forces occurred in Ad Dali, Al Jawf, Sadah, and Taizz. Some territory was exchanged between pro-Houthi and anti-Houthi forces in Sirwah and As Safra fronts in Marib governorate. Aside from these locations, frontlines remained relatively static in Yemen. Saudi-led coalition airstrikes continued at a lesser degree than in previous weeks, mostly focusing on frontlines in Al Jawf, Hajjah, Marib, and Sadah. Additionally, Saudi-led coalition airstrikes were reported in the city of Sanaa for the first time since early February. The majority of indirect violence in Yemen continues to take place in Hodeidah governorate, with multiple shelling events recorded daily.

While the Riyadh Agreement between the Southern Transitional Council (STC) and pro-Hadi government has stalled and the STC has reportedly withdrawn from implementation committees (Al Masdar, 21 February 2020), other agreements have been made throughout Yemen. A deal was reportedly struck between the pro-Hadi government and Houthi government in Amman, Jordan for a prisoner swap between their respective forces (Asharq al-Awsat, 18 February 2020). Additionally, pro-Houthi and anti-Houthi forces in Hodeidah agreed to a seven-point de-escalation plan in the governorate with the assistance of the United Nations Mission to Support the Hodeidah Agreement (Aden al Ghad, 19 February 2020).

In Saudi Arabia, there were conflicted reports as to whether Saudi air defenses successfully intercepted pro-Houthi ballistic missiles and drones launched at the Aramco facility south of Yanbu, west of Al Madinah, and other areas nearby. However, Saudi activists reported that explosions were heard in the city. Notably, after two weeks of relatively high levels of activity, neither IS nor al-Qaeda in the Arabian Peninsula (AQAP) claimed any activity in Yemen during the reporting period. On Sunday, AQAP confirmed the death of its leader Qassim al-Raymi, which occurred about a month ago, and announced the appointment of a new leader, Khalid Batarfi (The National, 23 February 2020).

ACLED continues to record a decline in demonstrations in Lebanon last week, with minor spikes reported due to the death of an activist following an injury sustained during protests in November 2019 (Al Arabiya, 18 February 2020).

In Bahrain, a number of additional demonstrations were reported commemorating the ninth anniversary of the Bahraini uprising on 14 February 2011.

Protests were also reported in Palestine and Jordan against the US peace plan.