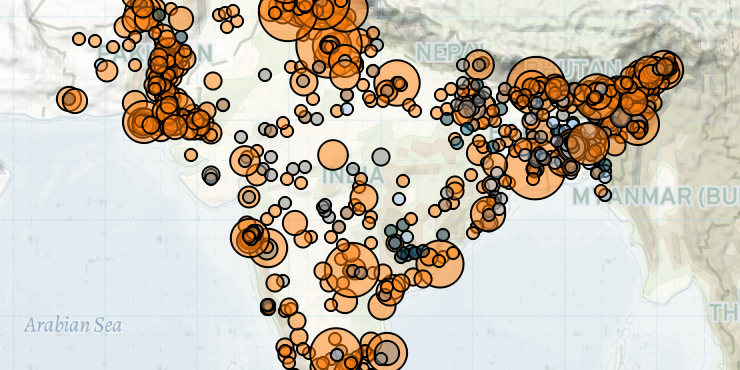 In Pakistan, organized violence involving domestic rebel groups increased last week. Ten people, including three police personnel, were killed in a suicide bombing at a rally of Ahle Sunnat Wal Jamaat (ASWJ) in Balochistan. The ASWJ, a radical Sunni Muslim political party, reportedly having known links with the militant group Lashkar-e-Jhangvi (LeJ), has in the past claimed responsibility for attacks on Pakistan’s Shia Muslim minority (Gandhara, 17 February 2020). While several competing Islamic militant outfits and Baloch nationalist groups operate in the province, no group claimed responsibility for the attack. Two other attacks on security forces were recorded in Kech and Dera Bugti districts of Balochistan province with twenty-one security personnel and three militants reportedly killed (Gandhara, 19 February 2020; ANI, 20 February 2020). A little-known Baloch nationalist militant group, Baloch Liberation Tigers (BLT), claimed responsibility for the attack on security personnel in Dera Bugti. In the past, the group has claimed responsibility for blowing up oil pipelines, railways (ANI, 18 March 2019), and killing ethnic Punjabi migrants (Express Tribune, 7 July 2012). The BLT and several other armed Baloch nationalist groups have been battling Pakistani security forces for over a decade demanding independence for Balochistan and control over the natural resources of the province (Al-Jazeera, 3 July 2019).

Meanwhile, in Khyber Pakhtunkhwa province, one police officer was killed, and two others were injured in an explosion targeting a police van assigned to escort health workers during a three-day nationwide anti-polio vaccination campaign. In Pakistan, health workers and security details associated with anti-polio vaccination campaigns have been regularly targeted by Islamist militants and hardline religious parties. They claim that government immunization programs are part of a Western agenda to sterilize Muslim children and are a cover for Western spies (Gandhara, 18 February 2020). Security forces also conducted an operation against militant outfit Tehreek-i-Taliban Pakistan (TTP) in Khyber Pakhtunkhwa province. Two TTP militants, including a senior commander, were killed during the operation.

Elsewhere in India, nationwide demonstrations continued against the CAA, more than two months after the law was passed by the Parliament of India. The proponents of the Act, the ruling Bharatiya Janata Party (BJP), argue that the law offers protection to persecuted minorities. Those opposed to the Act deem it to be discriminatory, particularly towards Muslims, and have raised concerns that the BJP is undermining India’s secular traditions (BBC, 11 December 2019). Last week, several clashes between supporters of the BJP and opponents of the Act were reported. Also, continued intervention by police personnel and the detention of protesters were reported in several states, including in the capital, Delhi.