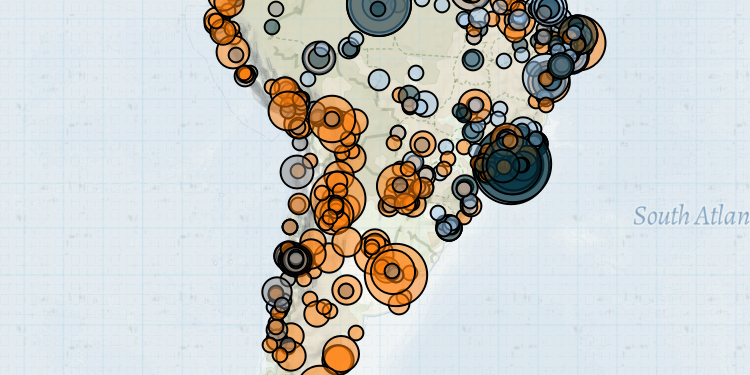 Last week in South America, key developments include: violent demonstrations led by military police officers in Ceará state in Brazil; the killing of five social leaders in Colombia by armed groups; and state repression against protesters in Chile.

In Brazil, salary readjustment demands by military police officers has prompted a strike and widespread demonstrations in the state of Ceará. Officers occupied several army headquarters, and vandalism was reported in several cities. President Jair Bolsonaro sent in the army to guarantee public security, under a law and order decree, as strikes are prohibited by the constitution for military and police officers, and are therefore considered mutiny.

In Rio de Janeiro city, clashes between the Terceiro Comando Puro, or Third Pure Command (TCP); the Comando Vermelho, or Red Command (CV); and different militia groups continued last week. The West Zone of Rio de Janeiro city is the battleground of a territorial dispute between the CV and the TCP, the latter of which forged an alliance in 2014 with a police militia group active in the area (Notícias UOL, 1 November 2019).

In Colombia, attacks toward former Revolutionary Armed Forces of Colombia (FARC) members, unionist leaders, social leaders, and indigenous people resulted in five reported fatalities last week in the departments of Nariño, Chocó, and Antioquia. Several local community leaders killed in recent months in Colombia have been working towards the implementation of the peace agreement of 2016 (InSight Crime, 16 October 2019).

Meanwhile, an armed clash between military forces and a FARC dissident group resulted in two reported fatalities in Meta department in Colombia. After the peace agreement was signed in 2016, the armed group Revolutionary Armed Forces of Colombia (FARC) split into three different outlets: the political party, called Common Alternative Revolutionary Force (keeping the acronym FARC); dissident groups; and the rearmed guerrilla group (Colombia Reports, 11 October 2019). The dissident groups are composed of armed fronts expelled from the FARC; these groups currently fight for control of abandoned FARC territories and criminal markets.

In Venezuela, the number of demonstration events remained constant compared to previous weeks, as citizens continue to demand salary adjustments and access to basic services, such as potable water, domestic gas, and electric power. A recent assessment from the United Nations World Food Programme (WFP) indicates that nearly one household out of five has unacceptable levels of food consumption (UN WFP, 2020), as hyperinflation renders many salaries worthless.

In Chile, the number of demonstration events last week decreased in comparison to previous weeks. However, demonstrations comprised of marches with hundreds of people were recorded in regional capitals (TeleSur, 22 February 2020) as citizens celebrated the four-month anniversary of the movement that started in October 2019. The marches often resulted in clashes between demonstrators and police forces, with damage to private and public property. State forces reportedly used tear gas and water cannons to disperse the groups (La Tercera, 19 February 2020). The movement that started in October 2019 was frequently confronted with a repressive crackdown from state security forces, resulting in the investigation of human rights abuses (DW, 31 January 2020).

In Suriname, thousands protested in the capital Paramaribo, against the current administration and President Dési Bouterse’s economic policies (Loop News Barbados, 17 February 2020). The demonstrations were sparked over an increase in fuel prices and alleged misuse of funds by the Central Bank. Bouterse, recently sentenced to 20 years in prison for killing political opponents, has already claimed that he will run for the parliamentary elections expected to take place in May 2020 (France24, 3 December 2019).