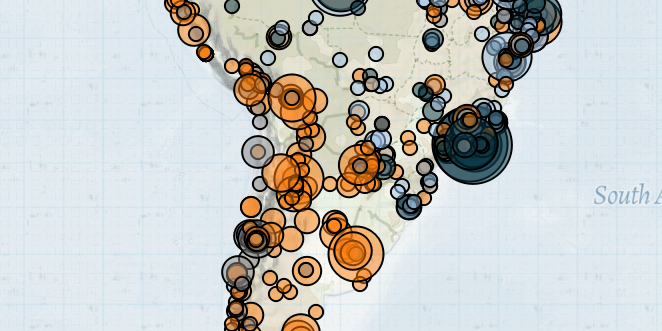 Last week in South America, key developments include: three political killings in Colombia by armed groups; increased polarization leading to targeted attacks in Venezuela and Bolivia; continued violence involving the ELN in Venezuela; continued unrest in Chile; and a sustained strike by military police in Brazil alongside continued risk to civilians caught in the crossfire of fighting between state forces and criminal groups.

In Colombia, attacks targeting a former Revolutionary Armed Forces of Colombia (FARC) member and two social leaders resulted in three reported fatalities last week, in the departments of Antioquia, Santander, and Caquetá. A recent United Nations report criticized the Colombian government for not providing enough protection to former FARC members since the signing of the Peace Agreement in 2016 (UNHRC, 2020).

In both Venezuela and Bolivia, violent events involving political party members and their supporters were reported. In Venezuela, the opposition leader, Juan Guaidó, and his supporters were attacked during a protest in Lara state (El Nacional, 29 February 2020). The attackers are suspected members of the Colectivos, which are paramilitary groups backed by the government of President Maduro (InSight Crime, 18 March 2019). A protester was shot, and at least fifteen journalists present during the event were attacked. Meanwhile, in Bolivia, supporters of former President Morales and his political party, the Movement for Socialism (MAS), started a fire during a demonstration outside a hotel where a press conference was being held by a candidate for vice president of the Creemos alliance (Hoy Bolivia, 27 February 2020). This trend in targeted violence between political groups points to polarization in both countries, and is expected to increase in the lead up to elections in both countries. Parliamentary elections are scheduled to take place in Venezuela at the end of the year; in Bolivia, presidential elections will be held on 3 May 2020.

In Venezuela, an armed clash between Venezuelan soldiers and the National Liberation Army (ELN) took place in Apure state, when ELN members shot at a military helicopter. Four members of the ELN were killed (Radio Fe y Alegria, 25 February 2020). The armed group has been active in the country for decades, but its activities in the country have increased in recent years along the Colombian-Venezuelan border. With the demobilization of the FARC in 2016, the ELN took over territories and markets previously controlled by the FARC (InSight Crime, 28 January 2020).

In Brazil, the strike led by military police officers to demand salary readjustments entered its second week in the state of Ceará, although the number of demonstration events decreased compared to the previous week. The lack of police officers on-duty led to an increase in the criminality numbers in the state (G1, 27 Feb 2020).

In the state of Rio de Janeiro, the number of battles remained unchanged compared to the previous week. In the West Zone of Rio de Janeiro city, drug traffickers of the Red Command (CV) killed a police militia member in Praça Seca neighborhood. This triggered a police operation in the area, in which a young girl was killed. This continues the trend of young children being caught in the middle of violence in Brazilian cities. In January 2020, 4 children between the ages of five and eleven, were killed by stray bullets during armed clashes between state forces and criminal groups in the city (Folha de São Paulo, 2 February 2020).

In Chile, the number of demonstration events remained low in comparison to the previous week. Groups of supporters and opponents of the proposal for a new constitution staged protests across the country, mainly in the Metropolitan region (Diario El Dia, 27 February 2020). Following widespread social unrest at the end of 2019, the administration scheduled a national plebiscite to gauge whether citizens want a new constitution, and how its drafting ought to be conducted. The plebiscite is expected to take place on 26 April 2020 (TeleSur, 26 February 2020).