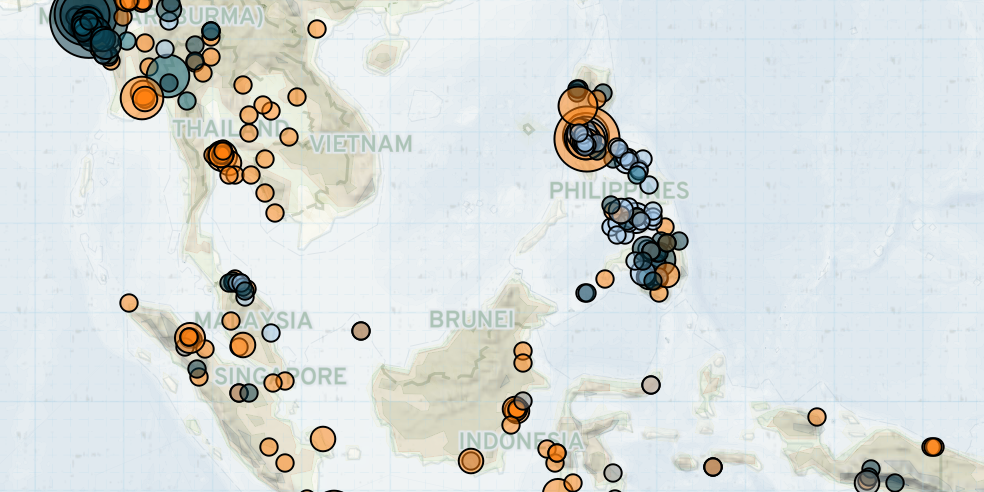 In Southeast Asia, key developments last week include: reports of civilian fatalities stemming from shelling in Myanmar; increased protests in Thailand after the dissolution of the Future Forward Party; ongoing clashes between state forces and communist rebels in the Philippines; separatist clashes in both Thailand and Indonesia; and protests in Malaysia during the political upheaval over the Prime Minister position.

As fighting continues in Rakhine state in Myanmar between the military and the United League of Arakan/Arakan Army (ULA/AA), shelling from the conflict continues to cause civilian casualties. In Mrauk-U township, five civilians were reportedly killed from shelling during clashes between the two groups. The fighting comes as the Brotherhood Alliance, of which the ULA/AA is part, recently extended its unilateral ceasefire an additional 25 days (Radio Free Asia, 2 March 2020). As shown in ACLED’s recent report, declarations of unilateral ceasefires have done little to reduce the fighting in Rakhine state.

Further, there were clashes last week between the military and the Restoration Council of Shan State/Shan State Army-South (RCSS/SSA-S), a signatory to the 2015 Nationwide Ceasefire Agreement (NCA). The fighting occurred despite a recent meeting between the RCSS/SSA-S and the military, and the attendance of high-ranking military officials at the Shan National Day ceremony at the RCSS/SSA-S headquarters in early February (Irrawaddy, 6 February 2020). The RCSS/SSA-S had recently taken the lead in negotiations to hold a fourth national-level peace conference in April; it remains to be seen how these clashes will impact negotiations (Shan Herald Agency for News, 29 February 2020).

Meanwhile, several protests were held across Thailand after the dissolution of the Future Forward Party, a party critical of the military’s continued role in domestic politics. Many of the protests were student-led and took place on high school and university campuses. Campuses are the only places where gatherings of five or more people are allowed without prior government permission. More protests are likely given the growing dissatisfaction with the current political climate (AP, 26 February 2020).

Further, in the Philippines, as senate hearings began regarding the renewal of the franchise license for the media outlet ABS-CBN, eight demonstration events were recorded across the country in support of the organization. The ABS-CBN has been targeted by President Duterte for its independent news coverage. Its franchise license is set to expire in May (Rappler, 26 February 2020).

Finally, in Malaysia, two demonstration events were reported last week in Kuala Lumpur after Prime Minister Mahathir Mohamad’s resignation. Muhyiddin Yassin, who was a member of Mahathir’s Bersatu party, won the support of the King to become the new Prime Minister. The jockeying for power that Mahathir’s resignation ignited is not yet finished as it remains to be seen how a new coalition will take shape when parliament convenes in March (Reuters, 29 February 2020).